Flyers get much-needed point, but fall to Isles in shootout, 3-2 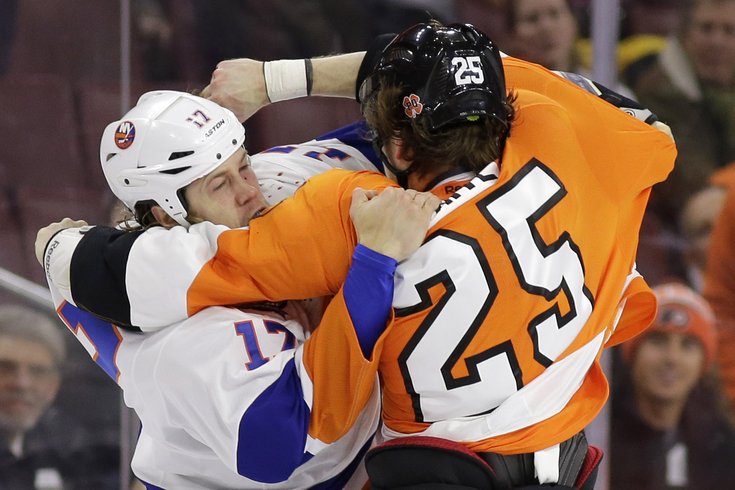 The Flyers, winners of four straight games, saw their season-high win streak snapped by the Islanders on Thursday night, but not before they were able to steal a point.

That was because the Flyers -- whose last loss was a 7-4 beatdown by the Islanders -- were outplayed for nearly the entire game but somehow found themselves up 2-0 midway through the second period, despite being heavily outshot. That lead was the only reason the Flyers were able to hang on and force overtime, ultimately losing 3-2 in a shootout.

Despite the loss, goaltender Steve Mason was sharp again. He saved 28 of the Isles' 30 shots. His teammates, on the other hand, were only able to muster 18 total shots (16 in regulation).

Here are some thoughts on the game:

For the Flyers, this was their last of five straight home games dating back to before the all-star break. They went 4-0-1 over that stretch, which is great. But this time of year, points are a premium, and considering they entered the night 10 points out of a playoff spot, it would have been nice for them to get a second vs. the Isles.

Now, the team will head out on a four-game road trip. Considering how well they've played at home lately vs. on the road, this stretch -- it starts Sunday in Washington -- will go a long way toward determining whether or not they can catch the Bruins, who currently hold the final wildcard spot in the East.

In their last 10 home games, including Thursday night's loss, the Flyers are 7-2-1.

On the same night veteran defenseman Kimmo Timonen announced that he'll be returning to the ice, the Flyers got back a pair of players who have missed time recently with injuries of their own.

Neither Scott Laughton (concussion) nor Nicklas Grossmann (shoulder) played a major role in the loss, but it was still nice to have both players back. Winger Michael Raffl (illness) briefly returned to practice this week before being diagnosed with pneumonia and being force to shut it down.

Grossmann finished with just over 18 minutes of ice time. He was +1 with a hit and four blocked shots. Laughton won 71 percent of his faceoffs in his 12 minutes, adding two hits and shot.

Just over two minutes into the game, Ryan White, playing in just his fourth game as a Flyer, dropped the gloves with Isles winger Matt Martin.

It was one of the longer fights I've seen in a while, and after seeing the replay, it's safe to say White got the better of Martin -- specifically his nose.

There was also this shot of Martin:

Matt Martin breaks his nose in a fight tonight, and his girlfriend tweets this #goals pic.twitter.com/d8MPktTEuK