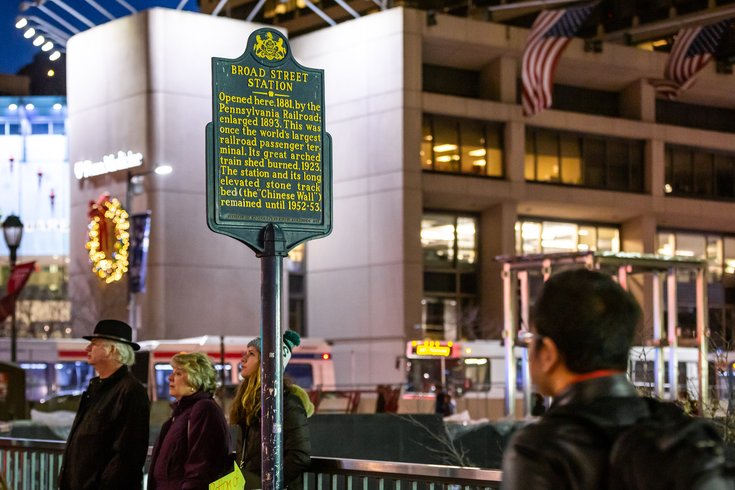 A Pennsylvania state historical marker on the Northwest corner of 15th and Market streets in the former location of Broad Street Station.

Philadelphia has more than 300 historical markers spread throughout the city, each recognizing a significant person, place or event that shaped Pennsylvania's development.

Another five markers will soon be coming to the city after the Pennsylvania Historical & Museum Commission approved 18 new markers across the state.

The new markers were selected from 55 applications, bringing the state's total to more than 2,300 since the program's inception in 1946.

A complete online database of Pennsylvania historical markers allows you to locate specific figures by county and category, which can range from Native Americans and settlers to politics, athletes, entertainers, artists, factories and businesses.

Below are the new Philadelphia markers and the descriptions provided by the PHMC. Exact locations and installation dates were not immediately available for all of them.

A Quaker abolitionist and activist, Jeanes made plans for her substantial fortune to further several causes upon her death. Most notably, her contributions enabled the establishment of Jeanes Hospital, dedicated to cancer research, and the Jeanes Supervisors program, the precursor to the Negro Rural School Fund, which educated many African American teachers and students across the southern states.

This early African American cemetery was established in 1810 by Mother Bethel A.M.E. Church after the burial ground at the church had been filled. The ground was purchased by church members and may be the first independent cemetery for the interment of the African American community. After the land had been sold several times, the Weccacoe Playground was built over the burials rather than having them relocated.

Considered one of the greatest basketball players of the mid-20th century, Gola received numerous individual achievement awards, leading the LaSalle College team to victories in the National Invitation Tournament (NIT) and the NCAA Championship. He went on to play 11 seasons in the NBA and is one of only two players to have won the NIT, as well as NCAA and NBA championships. He represented the U.S. in the 1964 "Behind the Iron Curtain" tour and was elected to the Naismith Basketball Hall of Fame in 1976.

Women's Pa. Society for the Prevention of Cruelty to Animals

Nominations for historical markers may be submitted by any individual or organization. They are evaluated by independent experts from throughout the state and approved by the agency's commissioners.