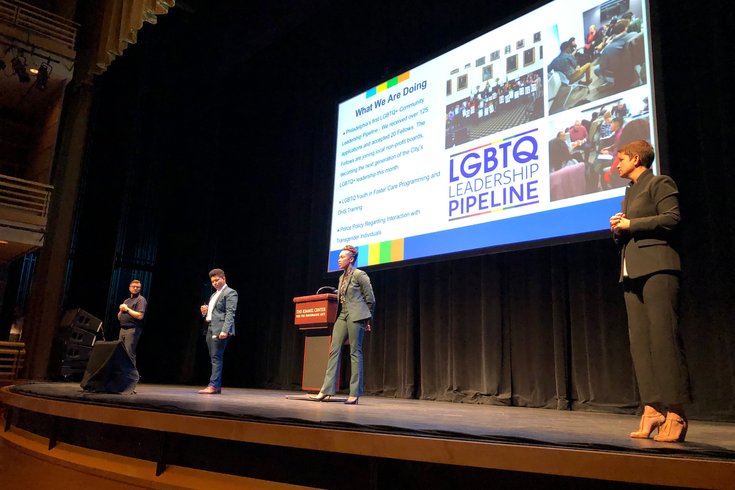 For the second consecutive year, the Philadelphia Office of LGBT Affairs hosted a State of the Union. Mayor Jim Kenney and representatives of nine different organizations serving the LGBT community attended the event Monday night at the Kimmel Center in Center City to champion LGBT culture and take a look at new programs.

The LGBT community in Philadelphia on Monday night heard about new programs, lingering controversies and continuing efforts to protect their rights during the annual State of the Union presented by the city's Office of LGBT Affairs.

For the second consecutive year, Mayor Jim Kenney and representatives of nine different organizations serving the LGBT community attended the State of the Union at the Kimmel Center in Center City to champion LGBT culture and take a look at new programs. Each of the nonprofits gave seven-minute presentations followed by smaller discussion groups that gave attendees the opportunity to ask questions, make suggestions and ultimately sign up to become more involved.

Amber Hikes, executive director of the LGBT Affairs office, acknowledged that Philadelphia is the only city to host this type of event anywhere in the country. “We’re actually building the communities we want to live in,” she echoed from a year ago.

Her goal in creating the event was to give LGBT organizations the chance to introduce important new programs and to address tough issues facing the community at large, particularly when it comes to inclusion among queer people of color and transgender individuals in leadership.

Hikes also highlighted a few developments from the Office of LGBT Affairs, including the celebration of Pride citywide with the lighting of landmarks like the Ben Franklin Bridge, Boathouse Row and the PECO building. Meanwhile, she is working with the Philadelphia Police Department to create a transgender inclusive policy that she anticipates “will be one of the most progressive” in the country.

A new organization was added to the SOTU this year – Project HOME’s Casarez Residence, named for the late Gloria Casarez, the first executive director of the Office of LGBT Affairs. The residence, which offers 30 units for LGBT youth, is helping the most at-risk young people in the city get a head start where they can pursue education and employment in a safe space.

The residence – the first of its kind in the state – opened last month in North Philadelphia and is already full, according to Kate Gormely, senior program manager for Project HOME. Though only 30 young people were housed, more than 300 young people applied. “This just speaks to the need,” she said.

In addition to having a place to live, each resident, who pays 30 percent of their income to rent a unit, has access to valuable educational and health programs, including the new Stephen Klein Health Center which has LGBT-centric medical care, and scholarships. “Over 40 percent of young adults are active in higher education,” said Gormley, either pursuing trade or college studies.

The William Way LGBT Community Center is working with the new leadership pipeline created by the Office of LGBT Affairs to train and encourage people of color to join organizations in leadership roles, Executive Director Christopher Bartlett said. About 20 new leaders are expected to become part of many of these organizations this year.

The William Way is also joining forces with the LGBT Elder Initiative to serve LGBT seniors in the community. The center recently hosted a town hall with Pennsylvania Sen. Bob Casey and LGBT elders that took a hard look at issues related to identity and aging in Pennsylvania.

Bartlett said a transgender drop-in center on the third floor of the center will open soon.

“Everyday is a day of transgender acknowledgement,” said Bartlett, noting the center was recently included in the Leeway Foundation’s “Trans Forming Inclusion” report for its progress in becoming more inclusive of the trans community.

The Philadelphia Commission on Human Relations has been addressing increasing hate crime and bias incidents throughout the city in the past year. According to Rue Landau, the agency's executive director, the 86 incidents reported in 2018 included vandalism, terroristic threats and/or harassment. Most of these incidents occurred in areas of South Philadelphia and the Northeast.

PCHR this year will continue to address hate crimes, as well as work toward getting LGBT protections passed on the state level, Landau said. Currently, Pennsylvania does not have protections in place to protect against discrimination based on sexual orientation or gender identity, which can negatively impact a wide range of issues related to employment, healthcare and housing.

After several years of controversies related to accusations of racism in Philly’s own Gayborhood, incidents that played a role in creating the first SOTU, PCHR is getting ready to release its Best Policies for Public Accommodations report that examines how places of business can avoid discriminatory practices, while increasing overall outreach and education surrounding issues of inclusion.

Two more goals, said Landau, are to “add protections to the Home Charter Rule” and “amend the FPO definition for sexual orientation and gender identity” in the city. 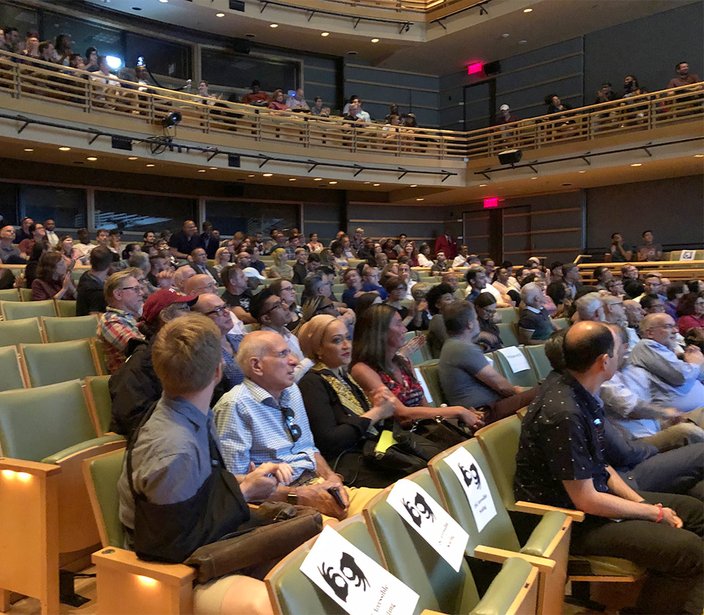 People attend Monday night's State of the Union at the Kimmel Center in Philadelphia, the only city in the country to host such an event. “We’re actually building the communities we want to live in,” said Amber Hikes, executive director of the Office of LGBT Affairs.

Celebrating its 30th anniversary this year, GALAEI, an organization serving the LatinX community, has created a few new initiatives, including a drop-in center in North Philadelphia specifically for youth and a new program called Guerreras, which will provide support and monthly social events for women in the community. GALAEI also launched its online Positively Queer network and several new special events at both Tabu and Boxers starting this summer.

“BEBASHI,” said Gary Bell, the organization’s executive director, “hasn’t always been as inclusive,” but that’s changing. In 2018 alone, 97 percent of people who were served by this longtime HIV/AIDS organization have been people of color. BEBASHI has reached out to an estimated 20,000 individuals and families overall.

The organization’s newest HYPE program is making inroads into an often overlooked and underserved population, the ballroom community of LGBT adults and youths of color who make up “houses” that host performances throughout the year. HYPE is helping to provide vital sexual health education, including information about PrEP, while opening the city’s first trans necessities closet that’s helping people access health and beauty needs, as well legal services. BEBASHI is also gearing up to introduce a bi-weekly social media talk show on Facebook and Instagram.

Philly Black Pride also celebrated a landmark this year. The 20th anniversary events in April looked back at ways queer people of color have fought for recognition. Le Thomas, board president, lauded the “grassroots effort” of the organization to do important work in the community, not only during Black Pride but also throughout the year.

Delaware Valley Legacy Fund, a philanthropic organization, has expanded its mission to help fund transgender initiatives. With a $1.3 million endowment and $1 million granted in 2018, DVLF is poised to make a difference by increasing grants to transgender programs right in the community. For starters, the June Our Night Out event will celebrating the 50th anniversary of Stonewall by donating a portion of proceeds to the annual Trans March.

MAZZONI LOOKS AHEAD; THE ATTIC INVESTIGATED

The Mazzoni Center has faced an uphill battle the past few years after several scandals rocked leadership and led to key personnel changes. For starters, a new board has been welcomed with interim leaders, and the center is hiring a director of diversity and inclusion to ensure the organization is inclusive for both patients and staff.

“We have had a challenging past few years,” said Nu’Rodney Prad, board president.

Despite the shake-ups, Mazzoni has served 8,000 patients in the current fiscal year – it’s one of the leading PReP providers in the city – with an operating budget that has increased to $17.9 million. The staff of 170 also grew by 35 percent this past year, and is expected to continue to grow with new positions being posted in the coming months.

Meanwhile, controversy is swirling around the Attic Youth Center, which is currently facing two different investigations, said Shawnese Given, the nonprofit’s interim executive director. One is over possible workplace discrimination and the other, an accusation of mishandling a supposed sexual assault. Given said she’s been focused on how “white supremacy, transphobia and adultism manifest in our organization.”

As the investigations proceed, founder and executive director Carrie Jacobs has been on administrative leave for several months.

“We expect the investigations to be concluded soon,” said Given, who added that the Attic is serving from 25 to 60 youth per day with special programs and hot meals. It’s one of the biggest and most influential LGBT youth centers of its kind in the country.

Given said that an estimated 40 percent of homeless youth in Philly identify as LGBT. As such, she’s currently working on initiatives with Host Homes, an organization that pairs homeless kids with vetted adult volunteers for housing and support.

Even though Philadelphia Family Pride is among the smallest LGBT organizations in the city (with just one part-time staff person) it has been involved with several key initiatives this past year.

Executive Director Stephanie Haynes said the organization and the ACLU of Pennsylvania were involved in the Fulton vs. City of Philadelphia case in which Catholic Social Services, a foster care agency, refused to license same-sex couples to be foster parents. Ultimately, the case was a win for LGBT rights after it was decided that the taxpayer-funded agency could not discriminate. The decision could be appealed and make its way to the Supreme Court.

In addition, Philly Family Pride hosted 30 different social events for LGBT families in the past 12 months.

A notable piece of legislation by Georgia Congressman John Lewis could also have an impact on LGBT families. The Equality Act, which passed the U.S. House last month, seeks to ban conversion therapy on the federal level. It also aims to increase foster parenting rights for LGBT and same-sex people and require any federally funded agency to adhere to federal protections that prohibit discrimination based on sexual orientation and/or gender identity.