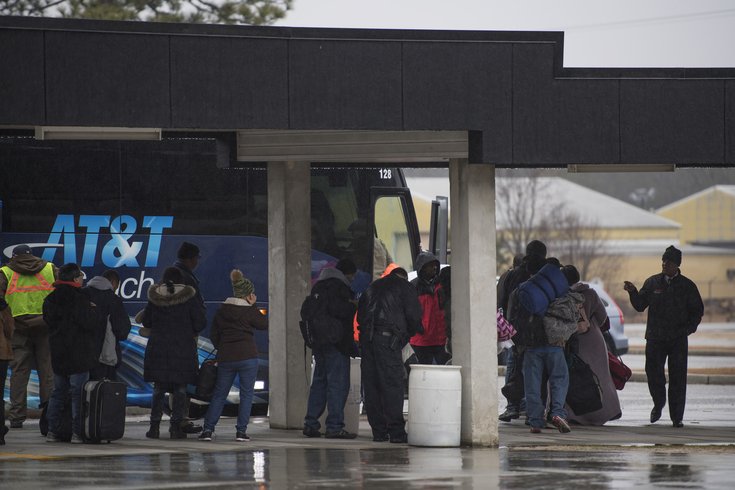 Passengers from the Amtrak train that derailed board a bus at Pine Ridge Middle School in Cayce, South Carolina.

The Silver Star train route travels from New York to Miami, making a stop at Philadelphia’s 30th Street Station on the way. According to reports, the train had about 140 passengers and eight crew members on board when the crash occurred.

The specific details of what caused the crash are still being unraveled, and it hasn’t yet been determined if both trains were moving. An investigation is still ongoing.

The collision happened close to a rail yard around 10 miles from Columbia, where, according to 6ABC, a few track spurs had been split off for freight cars to be loaded.

The Amtrak train’s lead engine, as well as some passenger cars, were derailed.

Among the passengers on the train was Philadelphia man Derek Pettaway, who posted on social media to tell his friends and family he was safe.

WLTX shared drone footage of the crash aftermath on social media, showing the points of collision and the train’s derailed cars.

Unfortunately, this is not the only fatal Amtrak accident this week. On Wednesday a train carrying Republican members of Congress hit a garbage truck in rural Virginia, killing one of the truck’s passengers.

In December, another Amtrak derailment in Washington state caused the deaths of three passengers, with 62 injured.

In 2005, South Carolina had another fatal train derailment as well, killing eight people when a 42-car freight train operated by Norfolk Southern crashed into a smaller train.

“This is not our first train derailment,” said Derrec Becker of the South Caroline Emergency Management Division to the New York Times.

“It’s unfortunate that we have two fatalities. Our hearts are with those families right now.”