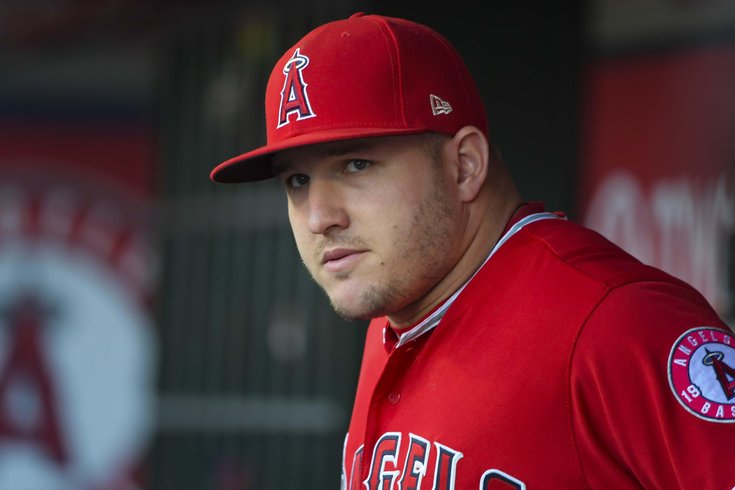 Los Angeles Angels centerfielder Mike Trout stands in the dugout before a game last season. Trout was asked recently about speculation he could return home to play for the Phillies when he becomes a free agent.

Given the pendulum of confidence about the Phillies' chances for either player, fans have naturally reacted to this hyper slow-drip process by turning their attention to the Angels' Mike Trout, because why not? Philadelphia would take the Millville, New Jersey, native over the other two in a heartbeat, if he were available.

And as long as rumors are being thrown around freely to keep fans engaged, why not bring Trout's future into the mix?

For years, Phillies fans have dreamed of a distant day when Trout, now 27,  would become a free agent and leave California to come back home. He comes to Eagles and Sixers games. Players give him touchdown balls to court him. He's the ultimate Philly athlete. The opportunity for Philadelphia to have a superstar playing in his sports hometown — not just any guy — feels like fate.

With two years left on his deal in Los Angeles, each worth $33.3 million, Trout finally addressed some of the rampant speculation about his approaching free agency, via Bob Nightengale of USA Today.

Mike Trout on #Phillies Free agent search: ‘I didn’t go a day this winter without someone asking, ‘When you coming to Philly.’ I can’t predict the future.’

Trout was asked specifically about the apparent hesitancy of elite athletes to choose Philadelphia in free agency. With LeBron James passing up the Sixers last summer and mixed signals now from Harper and Machado, the city badly needs a top-tier player to put ink to paper. The closest the city has come to that in recent years is Alshon Jeffery.

“I’m an Eagles fan, I know how we are," Trout said. “When you’re going good, you love them. Fans appreciate hustle all of the time, like 100 percent effort. Even if you’re’ struggling, if you go and show them that you’re giving 100 percent, they see that and respect that."

While Trout said said the current stalemate in free agency is "not good for baseball," he commended Harper and Machado for standing up for themselves in negotiations. Is the Phillies money "stupid" enough? Does it need to be idiotic? These are the questions separating Philadelphia from a conclusion to this saga.

For what it's worth, Trout was asked more directly about his future with the Angels. If you read his body language in this video, he doesn't sound like a guy who's willing to make a single promise beyond playing baseball. He sounds like a guy who wants to test free agency when his time comes.