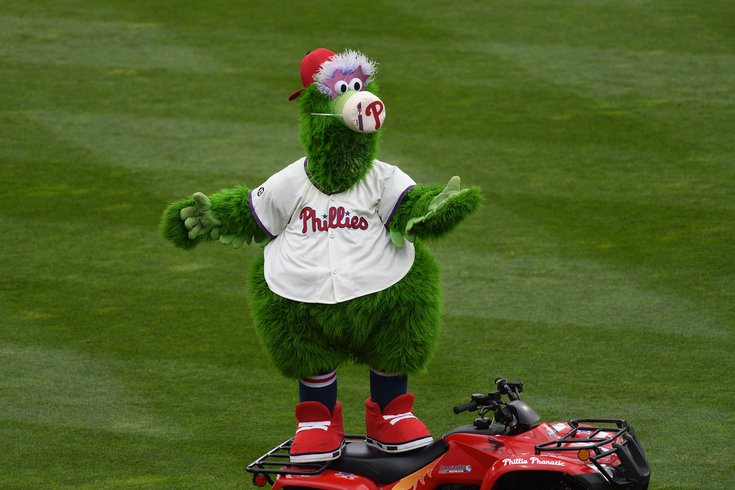 The Phillie Phanatic debuted at Veterans Stadium in April 1978 and has become a beloved fixture at Phillies games ever since.

Phillies fans who have been worried about the fate of the Phillie Phanatic can relax. It appears that the beloved mascot is safe from extinction at Citizens Bank Park, for now.

The franchise has a legal right to continue using the modified version of the Galapagos Island native amid an ongoing copyright dispute with the mascot's creators, a federal magistrate judge in New York recommended in a 91-page report issued Tuesday.

U.S. Magistrate Judge Sarah Netburn said that the ball club's modifications to the Phillie Phanatic were enough to protect it under the Copyright Act's Derivative Works Exception, which allows a copyright holder to continue using amended versions even when said rights no longer exist.

"To be sure, the changes to the structural shape of the Phanatic are no great strokes of brilliance, but as the Supreme Court has already noted, a compilation of minimally creative elements, 'no matter how crude, humble or obvious,' can render a work a derivative," Netburn wrote.

Netburn broke down the difference between the original and updated Phillie Phanatic.

"P2 has pink star-shaped eyelashes, light blue eyebrows, round eyes, oval pupils, a cylindrical snout (that is, one that is the same diameter the whole way across), 'wing tips' on its arms and a blue-tipped 'duck butt,'" Netburn wrote. "P1, for its part, has scalloped-shaped eyelashes, dark blue eyebrows, oval or egg-shaped eyes, a ‘'megaphone'-shaped snout, no wing tips and a dark blue tail that comes to a smaller point."

Netburn also said that Harrison/Erickson Inc. should be allowed to reclaim the copyrights to the original Phillie Phanatic and prevent the team from challenging the legitimacy of those rights.

Both sides can object to the report, but the Phillies appear satisfied with Netburn's recommendation.

"We are pleased that Judge Netburn agreed with us that the redesigned Phanatic and related artwork are derivative works that the Club can continue to utilize under the Copyright statute," Phillies attorney David J. Wolfsohn told the Inquirer.

The report now goes before Senior U.S. District Judge Victor Marrero, who is presiding over the case.

The two-year-long copyright dispute began in August 2019 when the Phillies filed a lawsuit to keep the Phillie Phanatic as the team's mascot after the New York-based company sent the franchise a notice of termination in June 2018.

The notice of termination claimed that Bonnie Erickson and Wayde Harrison created the copyrighted character and had the right to end the contract if both parties didn't reach a new agreement by June 2020. Artists are permitted by federal law to renegotiate their rights after 35 years.

The Phillies argued that a 1984 renegotiation with the company transferred the rights "forever." The team also pointed to its role in creating the costume, character and personality of the Phillie Phanatic.

A new, modified Phillie Phanatic was unveiled by the team during spring training last year in order to bring the company's legal argument to a close.

The updated features included new shoes and socks, different shades of green, scales underneath the arms, a new nose, a shortened and reshaped snout, a longer tail and new-looking eyes. The modified Phanatic is also noticeably lighter in weight than the original one.

The mascot's creators issued a statement last year blasting the team's updated Phanatic, calling the changes "an affront to our intellectual property rights."

Harrison/Erickson was hired in the 1970s by the Phillies to create the Phanatic, which debuted at Veterans Stadium in April 1978. The company is also known for its work with the Muppets.