Police spokesman Lt. John Stanford said no one was authorized by the department to place the decal 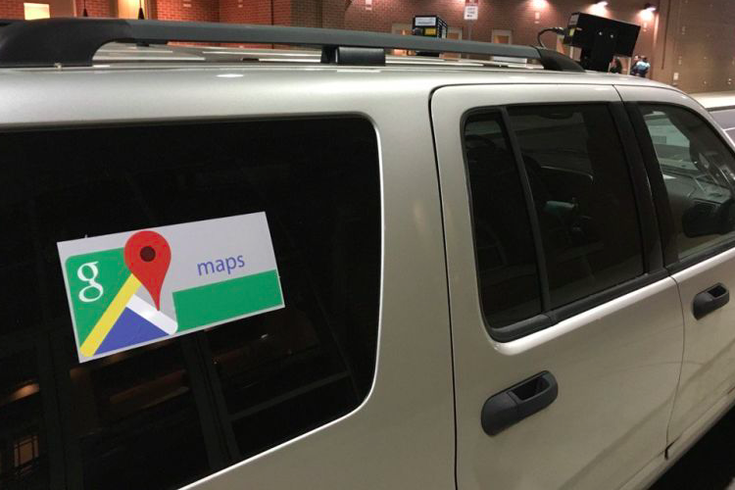 Philadelphia police brass said Friday that officers were just "being creative" when they attached a large Google Maps logo to a surveillance van in an apparent attempt to disguise it as one of the company's street-filming cars.

Police spokesman Lt. John Stanford said that no one was authorized by the department to place the decal on the van.

The department was made aware of the decal by a news outlet Wednesday and it was removed the same day.

A Google spokeswoman confirms the van was not part of its Street View fleet and says it's looking into the report.

The fleet records panoramic street views. The most common vehicles used are compact cars mounted with cameras and wrapped in the company's logo and mapping graphics.

The department launched an investigation into decal placement on one of its own SUVs, including a placard suggesting the vehicle belonged to the Pennsylvania State Police.

The vehicle in question, mounted with two license plate reader cameras, was first spotted at the Pennsylvania Convention Center by bewildered Penn computer science professor Matt Blaze, who tweeted a photo of the SUV and wondered whether it had been camouflaged for an unspecified purpose.

On Wednesday, Motherboard confirmed that placard information on the dashboard links the SUV to the Philadelphia Office of Fleet Management, a government agency that maintains 6,316 city-owned vehicles. Fleet manager Christopher Cocci told Motherboard that the vehicle does not belong to the Pennsylvania State Police or the Philadelphia Parking Authority, but said he believes it is connected to law enforcement.

The two mounted cameras on the vehicle are Automated License Plate Readers (ALPR), the technology PennDOT will rely on to help phase out registration stickers at the start of 2017. The cameras are capable of collecting thousands of license plate images per minute, effectively empowering law enforcement officers to spy at random on the habits of drivers without obtaining warrants.

In Philadelphia, police can only store this information for a year — the PPD has transparently been using 10 mobile camera units since 2011, Motherboard notes — but license plate information obtained can be held and referenced in perpetuity without restriction.

The Pennsylvania State Police, who use ALPR technology, told Gizmodo that the vehicle does not belong to them despite the PSP placard in the window. As Motherboard notes, ALPR is used to aid a variety of law enforcement investigations, from tracking down drug deals to conducting AMBER Alert search missions.

Two immediate questions have surfaced as a result of Blaze's discovery: Is the Philadelphia Police Department or another government agency disguising surveillance activities under the aegis of Google Maps, and, if so, what would necessitate covering it up in this manner?

On Thursday, Motherboard received an email from the police department confirming ownership of the vehicle and a pending inquiry into the use of Google and PSP decals:

We have been informed that this unmarked vehicle belongs to the police department; however, the placing of any particular decal on the vehicle was not approved through any chain of command. With that being said, once this was brought to our attention, it was ordered that the decals be removed immediately.

A spokesperson for Google also confirmed to Motherboard that the company is investigating the unauthorized use of its Google Maps logo.

A call for comment and an email sent to the Philadelphia Police Department were returned with the verbatim statement provided above.

You can read more about this story at Motherboard.