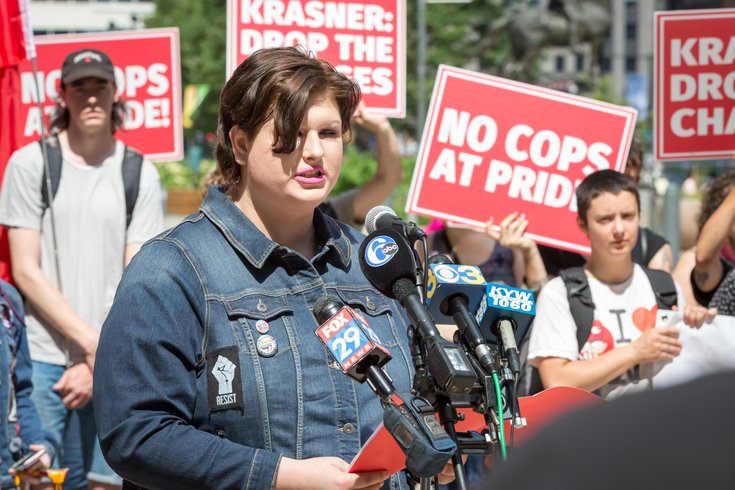 ReAnna Segin, 20, spoke at a 'No Cops at Pride' rally outside Philadelphia's City Hall, Wednesday, June 20, 2018. Segin was arrested earlier this month for allegedly attempting to burn a thin blue line American flag.

Earlier this month, ReeAnna Segin was arrested at the Philly Pride Parade and Festival for allegedly trying “to set a thin blue line American flag on fire while in a crowd” near 12th and Locust streets.

Several days after that June 10 arrest, the Philadelphia District Attorney’s office announced it wouldn’t pursue felony charges. Still, the 20-year-old transgender woman is facing misdemeanor charges of possession of an instrument of crime and recklessly endangering another person.

Not satisfied with the reduced charges, Segin will appear at a Wednesday rally outside City Hall organized by Philly for REAL Justice, Black and Brown Workers Cooperative and Philly Socialists.

At that 10 a.m. event, the groups will “demand the District Attorney’s Office drop all charges against ReeAnna and demand an end to police participation in Philly Pride.”

On Tuesday, Segin talked to PhillyVoice about the upcoming event, and the overarching issues behind it.

“I can’t talk too much about the events of that day,” the Woodbine, New Jersey, resident of her arrest for which she faces trial in August. “What I can talk about is the politics that lead up to it.”

Segin hearkened back to the Stonewall riots of 1969, which were precipitated by a New York City Police Department raid on a gay club in Greenwich Village.

As such, “Pride has historically been an anti-police movement,” she said, unwilling to answer whether that issue prompted the actions for which she was arrested.

“A bunch of queer people, led by trans women, got together and rioted against the police,” Segin said by way of framing the “No Police at Pride” mission. “They’ve been the oppressors in this situation. It’s not only disrespectful of Pride to welcome police, but it’s going against the desires of people in the queer community still facing violence against our community by police, which hasn’t gone away.

“Cops want to put rainbow logos on their cars and badges and all of a sudden they're great allies to the queer community? I don’t see a history where cops haven’t been the oppressors. They’re there to uphold the strength of the oppressive state.”

“As a trans woman, I’ve always faced people hating me. I’ve seen, experienced, and lived through the damage that that can have on a person." – ReAnna Segin

The thin blue line American flag that Segin allegedly tried to burn is used as a symbol to show support of police, and has often been used in response to the Black Lives Matter movement, which denounces police brutality and violence against the African-American community.

Without delving into the details of the arrest, she claimed the Blue Lives Matter movement not only co-opted Black Lives Matter, but they “made it into a racist, reactionary movement to cover the police’s own ass. They saw the risk of people becoming aware of their brutality still going on.”

What bothered her most about the past two weeks was seeing people “celebrating that a trans woman got arrested at Pride.”

“I honestly think that’s disgusting,” she said of those cheering her arrest. 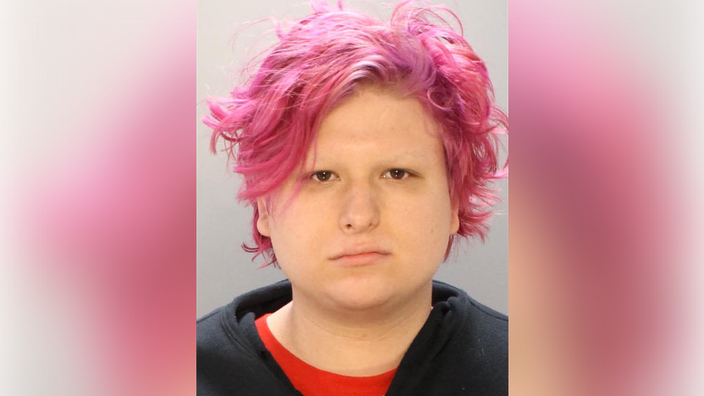 While she was still in custody, Segin didn’t realize the widespread attention her case was already getting. She’d learn of that when she walked out of custody and saw her dad and a friend.

“My friend told me this story reached Australia already,” said Segin, who plans to speak at, but not grant media interviews after, Wednesday’s rally. “I guess I can’t forget about this now.”

What she also can’t forget about is the reactions she’s faced since childhood. She said she knew early on but “started expressing as female in high school.” The hatred she said she faced buoyed her current-day activism.

“As a trans woman, I’ve always faced people hating me. I’ve seen, experienced, and lived through the damage that that can have on a person,” Segin said. “The effects that hate can have on people mentally has inspired me to advocate for people in similar situations.

"I can either just ignore the problem, be like ‘this is fine,’ or I can work to make the world a better and safer place for trans people."

Saying she chose the latter, Segin implored people to just listen to others who've experienced the same things she has and understand why it leads to friction with law enforcement.

"When people are saying ‘no cops at Pride,’ they’re not saying it for no reason," Segin said. "These pro-cop gays need to actively work to educate themselves and make the world safe for everybody on the LGBTQ spectrum.”

A Philadelphia Police Department spokesman said Tuesday afternoon that they had no statement on the rally at this time. A spokesman for the Philadelphia District Attorney's Office said he had no comment on it, as well.

District Attorney Larry Krasner said an investigation revealed Segin allegedly had tried to pour accelerant on the flag in order to light it on fire as road flares went off from her backpack. Authorities searched her bag and discovered two road flares, a can of paint thinner and a blue lighter stick.

Trial is scheduled for Aug. 15, according to court records. The charges Segin faces do not involve flag desecration, but rather the risk in which her alleged actions potentially placed herself and those around her.