Alexander Tominsky ate his 40th rotisserie chicken in 40 days in front of a celebratory crowd. On Monday, he opened up about the experience on 'Good Day Philadelphia' 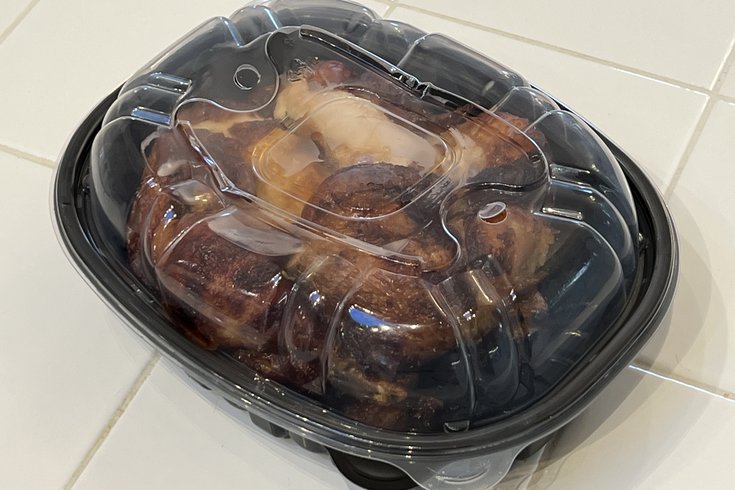 Sunday afternoon, following a disappointing weekend in local sports, a crowd of hundreds gathered on an abandoned pier to cheer on a Philadelphia man eating his 40th daily rotisserie chicken. Above, a file photo of rotisserie chicken from Boston Market.

One day after the Phillies fell in the World Series and the Union lost the MLS Cup, hundreds of people gathered on the abandoned pier behind the Walmart on Columbus Boulevard to root for a man eating an entire rotisserie chicken for the 40th straight day.

And on Monday morning, that man – Alexander Tominksy – revealed that he doesn't actually like chicken.

An astounded Alex Holley responded, "You hate chicken, but you've been eating it every day for the past 40 days."

Tominsky also said he doesn't plan to eat any more. "Am I an artist?" he said, repeating a question he was asked on the show. "I'm just a man that eats chicken. Or I did. I don't eat chicken any more."

Philly’s “Chicken Man” reveals after eating 40 rotisserie chickens in 40 days, he is done. NO MORE: pic.twitter.com/A1ZiT3oFke

Tominsky, 31, a restaurant server who has lived in Philadelphia since 2014, had set out to eat 40 rotisserie chickens in 40 consecutive days. This self-imposed challenge was not born of a bet or for money. Instead, Tominsky told The New York Times that he just wanted to make others smile.

"Sounds weird," he told the newspaper. "But I just felt like I was doing this for a very important reason."

To celebrate the milestone, Tominsky wore a white tank top and jeans as he consumed his final rotisserie chicken in front of a crowd of excited people.

How exactly did the crowd of people know about this unusual event? Tominsky had created a flyer asking Philadelphians to join him as he completed the feat. The flyer – which was posted to his Twitter account on Oct. 27 and spotted on the streets of the city – brought about plenty of online and offline attention.

The rest of the country will never understand the enduring spirit of Philadelphia pic.twitter.com/yZlMY61miI

Surrounded by photos of Tominsky eating chicken, the flyer read: "The chicken will be consumed on that abandoned pier near Walmart. This is not a party."

Tominsky's challenge became more widely known after the flyers were circulated, but he had been posting about his journey's milestones all along. He originally planned to eat 30 chickens for 30 straight days, but he stretched his journey to encompass 40.

I would like to Invite you all on a journey that I am on. I am eating a rotisserie chicken every day for 30 days. Today is day 11. I will keep you all updated as I get closer to my goal. Thank you. pic.twitter.com/HlFYrzGQIN

Celebrated my 15th consecutive day of eating a whole rotisserie chicken. Today I treated myself to @bostonmarket pic.twitter.com/hOArPT1cnR

His posts showed him enjoying his daily meals everywhere – from sitting on the floor to seemingly fancy restaurants. Tominsky's facial expressions ranged from a smirk to a straight face to a sickened grimace. At one point, he held what appeared to be a giant carrot.

Despite being branded as "not a party," raucous chants, cheers and Bruce Springsteen's "Streets of Philadelphia" rang out from that abandoned pier Sunday. At one point, while Springsteen's tune played, Tominsky changed the lyrics to, "Ain't no angel gonna greet me. It's just you and me my friends," acknowledging the huge group surrounding him as he held up his empty plate.

One Twitter user joked that the "Chicken Man," as Tominsky has been branded, and his fans were loud enough to register on the Penn State seismograph, likely referring to the disproven report that the Phillies crowd during Game 3 of the World Series registered on an earthquake detector.

Though this only-in-Philadelphia meal may not have actually broken any seismic barriers, it definitely caused waves online, where videos and photos circulated as people expressed their amusement.

A man in Philadelphia has eaten a whole rotisserie chicken for 40 straight days.

This picture belongs in a museum. pic.twitter.com/0DhsHqULQP

yea, we lost 2 championships in one day. but the next day? we celebrated a man eating his 40th rotisserie chicken in 40 days at an abandoned pier behind walmart. you can't keep Philly down. https://t.co/BvGzsRbx1q

I used to not understand why people thought Philly was so weird but saying “yeah we lost and it sucks. but a guy is eating his 40th rotisserie chicken in a row today so that’s something” is a sentence that we don’t bat an eye at. I get it now

People dismissing the Philly Rotisserie Chicken Guy because the feat itself is 'unimpressive' are missing the point. Some guy doing something bizarre, excessive, and pointless to widespread local acclaim is the highest form of American folklore, and, indeed, the nation itself.

On Sunday morning, Tominsky himself joked that he hoped "they greased the poles," referring to the city's safety precaution before major sports victories.

Though the demonstration brought smiles to the faces of those who attended in-person or watched through a screen, Tominsky expressed gratitude that the feat was behind him. Though he said he felt fine at the start of his journey, the rotisserie chickens began to make him feel cramped and bloated as he consumed what was often his only meal of the day.

"I'm happy that it's over," Tominsky told The New York Times. "My body is ready to repair."