The Union were down, never out, but their bid for a first ever MLS Cup fell short. 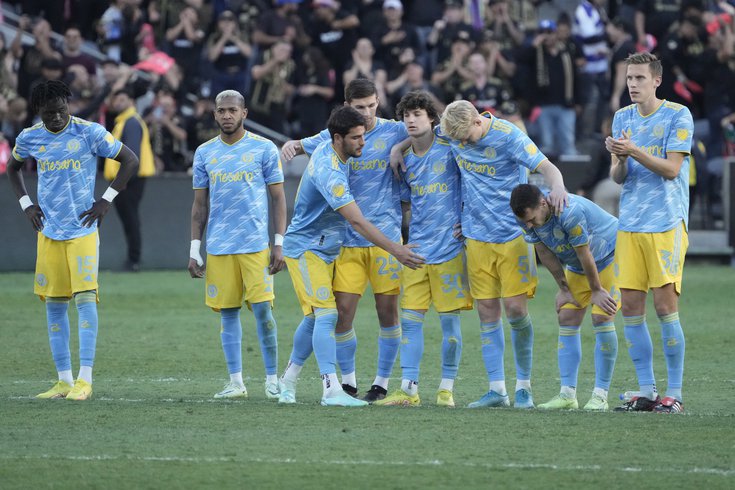 The Union's bid for the MLS Cup fell just shy out in Los Angeles.

All 120 minutes, and then some. Then, finally, a penalty shootout.

The Union were down, never out, but their bid for a first ever MLS Cup fell short.

They lost on the road to LAFC, 3-0 on penalty kicks after a 3-3 tie in extra time. An incredible season ended just shy on the doorstep.

The Union's shooters couldn't crack former goalkeeper John McCarthy, who entered the game after LAFC's starter Maxime Crépeau was red-carded and then carted off with an injury after colliding with forward Cory Burke to break up a late scoring chance.

Tied, 2-2, with extra time winding down, the Union created a scramble in front of the net, the ball fell right to Jack Elliott's foot, and he put it home for his second goal of the day and a 3-2 Union lead.

But it wasn't safe. Before you could even blink, LAFC marched right back down the field. Gareth Bale, on a pass across from Diego Palacios, headed in a ball that was just out of the reach of Blake to tie it again. With little time and opportunity left, the game was fated for a shootout.

Los Angeles' Kellyn Acosta opened the scoring in the 28th minute off a redirected free kick.

But the Union didn't waver from it. To that point, they were well in control of possession and won that battle through regulation and extra time with 53 percent.

It took time, but something broke.

In the 63rd minute, José Martínez threaded a perfect pass to Dániel Gazdag right in the middle of the box.

Gadzag stood all alone with the ball in front. Crépeau never stood a chance. The ball hit the back of the net and the Union tied it, 1-1.

LAFC's Jesús Murillo scored on a header from a corner kick in the 83rd minute to take the lead. That could've been it.

But the Union weren't about to be denied.

Philadelphia marched back down the field, Elliot directed in a header of his own, and the Union tied it back up in the 85th minute, 2-2.

This one's gonna sting for a while.