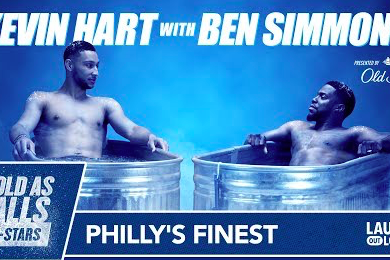 Simmons isn't often a very talkative player. He has a dry wit and generally stays focused on the game, despite a lot of surrounding noise about his supermodel girlfriend and shooting woes.

If there's one man capable of bringing more personality out of Simmons, it's Kevin Hart.

The Philadelphia native was ecstatic to have Simmons as the latest guest on his YouTube series "Cold as Balls," which features one-one-one interviews with sports figures conducted while Hart and his guest sit in ice baths. Hart endures a series of tired short jokes and asks star athletes pointed questions about the dramas that surround them.

Simmons got royalty treatment from Hart this time around, considering the host's rooting interests. They discussed everything from LeBron James to Australia, Simmons' pet Savannah cat and the Donovan Mitchell feud. Kudos to Kevin Hart for illuminating one of Philly's more enigmatic athletes in recent years.