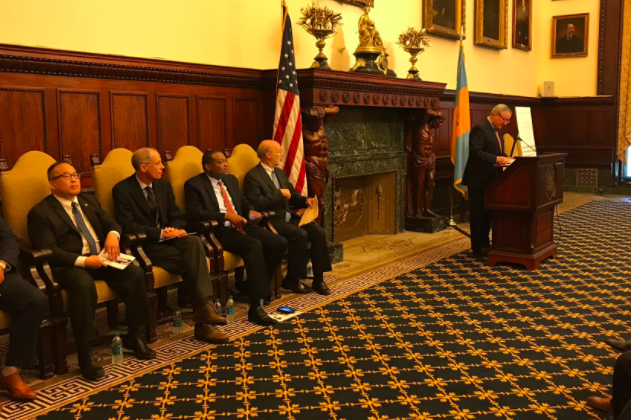 A committee created by Mayor Jim Kenney to address the opioid epidemic in Philadelphia unveiled this week 18 recommendations as part of its final report.

On Friday, the task force presented its findings to Kenney after four months of meetings with health experts, law enforcement officials and other first responders, as well as outreach to community members. Gov. Tom Wolf joined Kenney at a press conference to show support to efforts to curb the drug epidemic.

“The opioid epidemic has been taking lives, destroying families and undermining the quality of life of Philadelphians across the city,” Kenney said. “This report and its recommendations offer a roadmap as to how, together, we can take action and adequately address this problem to reduce use and the devastating loss of life this epidemic is causing.”

Formed in November, the 23-member committee was comprised of representatives from city council, addiction experts, researchers, law enforcement officers and "persons with lived experience." The task force estimated that there are more than 70,000 heroin users in Philly while the city reported 907 deaths due to drug overdose last year.

Huge crowd for the unveiling of the #PHLopioids report press conference. pic.twitter.com/Y2OviVRLcl

The 18 recommendations fell into four categories, including prevention and education, treatment, overdose prevention, and involvement of the criminal justice system.

The most notable item in the report was the task force's support of "user engagement sites." These locations would allow individuals to consume drugs under medical supervision, access sterile injection equipment and receive treatment.

"Safe consumption facilities have a long record of success in reducing the health and social harms of drug use among persons injecting heroin and other opioids," the report reads.

However, there are numerous legal issues that would need be to be addressed before the sites could become a reality, the task force admits.

“We can end this crisis, but it will take the coordinated efforts of very many people and organizations,” said Dr. Thomas Farley, the city's public health commissioner. “The recommendations of the task force will guide all of us in this. They are comprehensive and focus on consumer and provider education, expanded treatment efforts and overdose.”