The Philadelphia Union are holding another closed-door town hall meeting 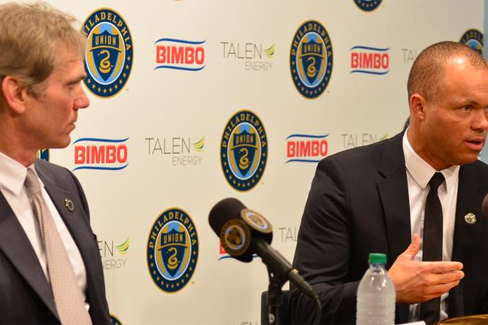 For the second time this season, some Philadelphia Union fans will get a chance to discuss their concerns with front office and technical staff members.

In an email sent to season ticket holders on Monday, the club announced a town hall meeting for next Wednesday, August 9, which happens to be the final day of Major League Soccer's secondary transfer window.

Not included are head coach Jim Curtin and team captain Alejandro Bedoya, who took part in the first town hall back in May.

According to the email, the trio will talk about the "vision of the club for 2018 and beyond."

The letter also says this:

"Topics will range from first team to the academy, from Talen Energy Stadium to future business decisions – all with an eye on how everything will impact your Philadelphia Union moving forward."

Those interested in going are directed to an RSVP link and a form for submitting pre-screened questions, which will be read by a moderator. I'd imagine that Carl Cherkin, Vice President of Business Relations and Communications, would be the guy for that job, but that's just a guess.

It might sound like a corny move, the idea of pre-selecting questions, but that was also the stipulation for the first town hall meeting and wound up being scrapped when the discussion began. Instead of asking questions through a moderator, the Union went for an open-ended and unfiltered talk, with fans simply raising their hands to ask questions.

That did result in some meandering and off-base comments, with one fan going on a rambling diatribe about the team failing to attack the back post on corner kicks. Another supporter asked about the status of Charlie Davies. The potential for fan forthrightness and courage was blunted by a comprehensive, 3-0 win against Red Bull just a few days prior.

There were, however, some sharp questions that resulted in significant takeaways.

We learned about the Union's scouting network, which consists of Stewart, Technical Director Chris Albright, and two former interns who were recently promoted. We learned that the team has been in talks with SEPTA to make mass transit to Talen Energy Stadium a reality. We also got an admission from Stewart that a history of losing, predating his arrival, has resulted in the inheritance of a lethargic fan base with a relatively short attention span.

The main issue, in my mind, is that the person who matters most won't be there, nor was he at the first meeting.

Owner Jay Sugarman has been mostly absent from public discourse involving his team dating back seven or eight years now. In the few times he's spoken about the club, I've found him to be honest, with straight talk about the club's Moneyball approach to cultivating organic talent instead of throwing millions of dollars at high-priced, foreign players.

The only time we heard from Sugarman this year was in his response to an open letter from the Philly Soccer Page's Dan Walsh. Under no obligation to reply, the Union's owner offered this as the most substantive passage of the 429-word letter:

"Here’s the thing. We have and will keep investing to make the team better. It’s been $5 to $10 million per year, every year, so far. We need to create environments for our fans, our players and employees that will be a foundation for excellence and long term success. Most of it has to be built from scratch. We will keep moving forward in steps, making improvements for both the short term and the long term. While some things are not possible, providing Earnie and our technical staff the money needed to build a cohesive team with sufficient firepower to win an MLS Cup is possible and he would not have come without that commitment from ownership."

That's really the heart of the matter right there, meaningful investment and making things that "are not possible" become possible. And while five to ten million dollars a year has moved this franchise forward, you have seven MLS players who earn an annual salary in that same price range. It's no coincidence that the clubs featuring Sebastian Giovinco, David Villa, and Kaka sit above the Union in the table.

I'm not sure what kind of questions Stewart and McDermott will be able to answer next week that aren't redundant in regard to the previous town hall, which took place less than three months ago. Wilson is an interesting addition to the panel, but all he can really say is, "well, the academy is doing well, we just signed some more homegrown players." I've enjoyed my interactions with all three over the years, and I do think we'll get some genuine stuff in lieu of canned crap, but there might be some topical repetition as well.

The shortcomings of this franchise are shared by many, but it starts at the top, and if Jay Sugarman isn't going to be there, then these gestures lose a little bit of luster. That said, the Union have been transparent and engaging with fans (and media) in the post-Nick Sakiewicz era, whether the dialogue has been reassuring or not.

Even if Sugarman won't be at this meeting, it's another chance for Union fans to speak directly to the other people that matter, and that's a valuable opportunity if you really care about the future of the club.