For the Philadelphia Union, it doesn't get any bigger than this weekend 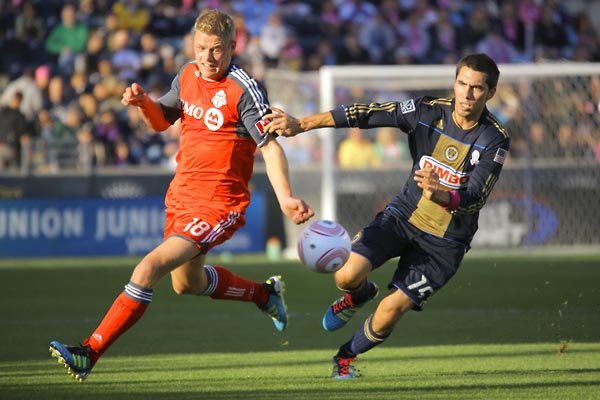 It was October 15th, 2011, when the Philadelphia Union clinched a playoff berth with a 1-1 draw against Toronto FC. They have not been back to the postseason since.

If the Philadelphia Union clinch a playoff berth this weekend, but everybody is watching the Eagles game instead, then did it really happen?

Such is life in Major League Soccer, where the playoff race is perennially dwarfed by the start of the NFL season.

Fans of both sports will want to make an effort to see both games on Sunday because there's a lot at stake for the Eagles and the Union. A Birds' win widens the gap with Washington and sets up a humongous showdown against the Vikings. A Union win essentially guarantees a playoff berth for the first time in five years.

It was November 3rd, 2011 when the Union went down to Houston, conceded a set piece goal, and crashed out against the eventual Eastern Conference champions by a 3 to 1 aggregate scoreline. That was the first and only playoff series that this franchise has ever experienced.

A win on Sunday against Orlando, which is already eliminated, gives the Union a 99 percent chance of getting into the postseason, even if they lose the season finale to New York. Sneaking in as the six seed is nothing to cheer about, but it's still a playoff spot.

It's been awhile, but it certainly hasn't been boring.

In a way, the Union's regular season failures were covered up by the club's success in the U.S. Open Cup. In 2014 and 2015, trips to the final of the competition were a needed distraction from the week-to-week struggles of a chronic underachiever.

They didn't win those finals against Seattle or Kansas City, even with home-field advantage. The Sounders and Sporting were probably the better teams coming into those games, but the underdog Union did enough in both matches to win the first trophy in franchise history.

It just didn't happen, and the last two seasons were essentially over once those finals were played. Late October games in 2014 and 2015 were an exercise in going through the motions with the playoffs pretty much out of reach.

The 2015 Philadelphia Union was eliminated from the postseason on October 3rd with a 3 to 1 loss in Toronto. Philly fell to a record of 9-16-7 and would finish 9th place in the East with 37 total points. Even with six of 10 teams earning playoff spots that year, the Union still managed to finish 12 points below the line.

It was a similar story in 2014, when the Union blew a 1-0 lead against Chicago after a stoppage- time mistake from goalkeeper Rais Mbolhi.

Nine days later, and with playoff hopes hanging in the balance, the team again collapsed, this time gifting Columbus with three goals in six minutes and eliminating themselves from the postseason.

Not since 2013 has the Union been in playoff contention on the final day of the season, and I'd argue that there was more disappointment and heartbreak with the way that squad finished.

The concern really crept in with a pair of 1-0 losses in September, one at home to Houston and one at 10-man San Jose. Philly was struggling to score goals and needed a spark in the final four games.

The Union started October with a crucial home shutout of Toronto. You remember that one as the "Kleberson game", where the under-used Brazilian midfielder hit a sublime stoppage-time free kick to earn all three points for the 10-man Union.

That win moved Philly into the fifth and final playoff spot with three games remaining.

But they would stumble down the stretch, starting with a 1-1 draw in D.C., only salvaged with a late header from Jack McInerney, who had gone cold after a mid-season call-up to the U.S. Gold Cup squad. D.C. was historically bad that season and finished with three wins, 24 losses, seven ties, and a minus-37 goal differential.

There was still time to get back into the playoff picture, and the Union played a good first half in Montreal the following week, even taking a 1-0 lead into the intermission. Like most of their losses and draws that season, they conceded late, this time giving up an 84th-minute set-piece goal in a 2 to 1 loss.

The scenario was jumbled going into the season finale, but the Union still had a shot at the playoffs. John Hackworth's team needed a home win against Sporting KC, plus help from Columbus and Houston.

Again, the Union offense struggled at home, mustering only an 88th minute McInerney goal in a 2-1 loss to the eventual MLS cup champions. Philly was again eliminated from the playoffs.

Ex-Union center back Jeff Parke, reflecting on that season, had this to say back in February:

“Oh man, it was bitter. I came from Seattle where we were winning trophies and one of the top teams, top clubs in the league every year. I came here and it was just that feeling of, ‘we’re almost there,’ but you’re not. I think at the time we were just young at certain spots. We needed some more veteran leadership with guys who have more experience and who have played in those big games. Being with the team in a season where they knew they needed to up their game and push through to get those two or three wins needed at the end of the year, that would have made a huge difference.

"I remember so clearly that game against Houston. We were at home and they were almost level on points with us. They came up to our place, they were doing alright, and they snuck a goal in on a free kick and we lost 1-0. I think that was the point that just changed the season. It was just like, man, our team wasn’t scoring goals, we were giving up one goal a game. Games ended up being 2-1 or 1-0. I don’t think we scored at all for five games or something like that.”

As for the 2012 squad, that season was over before it really started, with Peter Nowak losing six of nine to start the campaign, then getting the sack in May. Hackworth took the reigns on an interim basis, put together a respectable run, and earned the full-time gig in the fall.

Even the 2011 squad needed some extra time to wrap up their playoff berth. It came down to a 1-1 draw on October 15th, one week after an unexpected road win in Seattle. That team finished in third place with 11 wins, eight losses, and 15 draws.

A win on Sunday against Orlando, which is already eliminated, gives the Union a 99 percent chance of getting into the postseason, even if they lose the season finale to New York. Sneaking in as the six seed is nothing to cheer about, but it's still a playoff spot.

This is the most important regular season game since October 26th, 2013, and the Union will get it done this time.