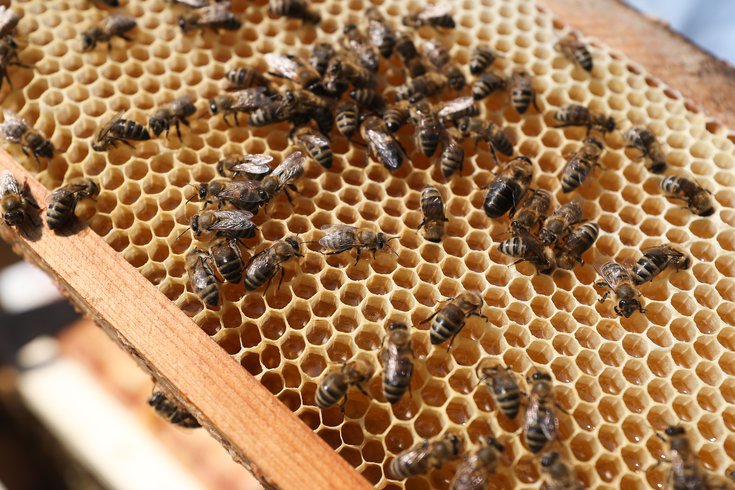 Bees are responsible for pollinating a third of the world's food supply. The honeybee populations sustained by urban beekeepers in Philly enhance the overall health of the city's ecosystem.

They are easy to miss. They're just a few simple wooden boxes perched on the rooftop of the Independence Blue Cross building at 19th and Market. But they're actually the newest homes to 30,000 honeybees in downtown Philly.

Thanks to a collaboration between IBX and Alveole, an installer and caretaker of beehives, the eighth floor rooftop is now a hub for honeybees who, because of the increasing colder temperatures, are already retreating into their hives to keep warm during the next few months.

Alveole approached the health insurance company during the summer about hosting the honeybees at it's building. It was a new and unique request but the company knew right away it wanted to participate, says Juan Lopez, IBX senior vice president of finance shared services.

"It turns out this sprawling urban rooftop is the perfect spot to raise and protect these pollinators. Not only does the location provide the right amount of space for the hives, it offers safe clearance from windows and other potential hazards for the bees, who are able to freely forage for food within a two-mile range," Lopez says. "Within just days of installing the hives in October, the honeybees went to work pollinating the last fall blooms around the city and creating their flight paths.

"Philadelphia has a wealth of parks, flowers, trees and green space to fit those needs," he explains. "We provide a clear 6-foot diameter for the hives on our eighth floor balcony, and the bees do the rest." In warmer months, they stay busy pollinating local flora and creating honey. Lopez says participating in initiative has helped educate more people both inside and beyond the insurance company about the positive environmental impact of bees on the city, something that's very much at risk.

According to the United Nations, pollinators like bees are under increased threat from human encroachment. Why this matters is that bees pollinate a third of the food that humans eat. Foods like almonds, apples, blueberries, broccoli and avocados depend on bees and other pollinators, like butterflies and bats, and produce crops.

RELATED:  For Philly-area neurosurgeon, spring brings a hive of activity

"Our hope in participating in the honeybee program is that we'll help start a ripple effect in our region," Lopez says. "And that other businesses and properties will consider taking this small step, which has the potential for a much larger, long-lasting, positive return."

Since 2009, the guild has been bringing together apiary enthusiasts throughout the city. And while the group's meetings have since gone virtual during COVID-19, the enthusiasm has certainly not waned among these diehards. And for good reason: The range of spaces available in Philly – from backyards in Germantown to rooftops in Center City – are, it turns out, quite conducive to beekeeping.

"The bees in urban areas go primarily to the trees that grow in yards, on streets and in parks," Childs says. "You can plant fancy bee plants in your yard, and I can almost promise you that your bees won't go to them – they are too close."

Bees like to fly at least a couple of hundred feet from their hive to get nectar and pollen, he says. Because pollination is important for the trees that they visit and for any plant that they go to to collect nectar and pollen, their presence can enhance the overall health of Philly's urban ecosystem.

Norris first got interested in beekeeping when he was in the Peace Corps during the 1960s doing farm work in India. 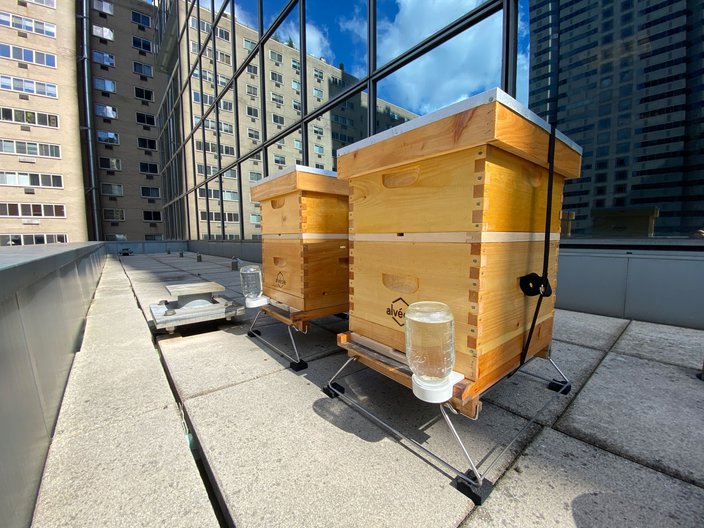 Alveole, an installer and caretaker of beehives, worked with Independence Blue Cross to install beehives on the eighth-floor roof of the health insurer's Center City building.

As a self-described "city boy" (and a practicing surgeon), he ultimately learned the ropes from more experienced farmers and beekeepers. The first time he saw a hive he was hooked, something he says often happens among a very diverse community of bee enthusiasts throughout the region.

"I will say that in my years as a beekeeper, I have encountered a tremendous diversity of people, from the very poor to the extremely wealthy, uneducated to PhD/MD types, Center City to extremely rural, all different racial backgrounds," Norris says. "I think there is something about beekeeping that gets people hooked, even though there are periods during the year that require considerable effort.

The installation of the hives on the IBX building coincides with educational opportunities for employees and the community on issues related to the environment, including workshops by the Alveole team where the company's employees learn about pollination, hive inspection and honey extraction.

The honey is already causing a lot of, well, buzz.

"The harvested honey is a really exciting piece of the honeybee program," Lopez says. "At the end of the next season, which runs from spring until fall, the Alveole team will harvest and jar the extra honey produced by our bees. We're currently talking about how we will share and use that honey."