For Philly-area neurosurgeon, spring brings a hive of activity 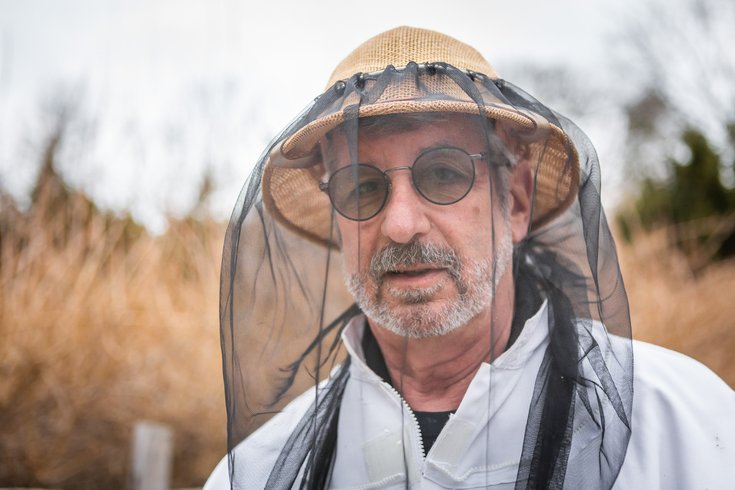 Dr. Steven Barrer, a neurosurgeon and director of the Vickie & Jack Farber Institute for Neuroscience at Abington Hospital – Jefferson Health, wears protection on his head. While he has felt the sting of a honey bee a few times, he said, "Over time I have become less nervous working with the honey bees. Most of them are pretty docile unless threatened.”

When Dr. Steven J. Barrer inherited a couple of beehives a few years ago, he discovered that the world of the honey bee is rich and complex, and he loves to share every buzzworthy tidbit he has learned along the way.

It all started when a family member working on the HVAC system at his home in Huntingdon Valley asked to set up a couple of beehives on his property. After a few years, when the relative didn’t have time to take care of them anymore, he asked the neurosurgeon to take them over.

“I’ve learned a lot about beekeeping from him and what I didn’t know I researched on YouTube and the internet,” said Barrer, director of the Vickie and Jack Farber Institute for Neuroscience and medical director of the Concussion Program at Abington-Jefferson Health,

THE ABCs OF BEEKEEPING

Barrer, 68, started with one beehive and then added another. But last year one of the hives died out and the other one swarmed, so this spring he plans on just repopulating one of them.

“Prime beekeeping season is spring and summer. I only collect honey late in the summer though. I want to give the hive a chance to make enough honey for themselves.”

Hives used by beekeepers are man-made and broken into sections. The bottom section is where the queen bee lays her eggs. The cells in these sections are filled with honey for the queen and her babies.

The top section is also filled with honey by the worker bees, but the queen is kept out of this area. This is the honey you can collect, Barrer explained.

“Not all colonies produce a lot of excess honey," he explained. "The most I ever collected was 10 jars. Last year, no honey, the bees were bums.”

Barrer describes his approach to beekeeping as more hands-off while some beekeepers prefer to check on their hives every day. “Honey bees have been around for more than 100 million years," he said, "so I believe that they know how to take care of themselves. I don’t go in very often.”

“The thing I worry about is parasites like the varroa mite that can kill off a whole brood," he added. "I check and treat for that, and also make sure the queen is healthy and the brood is robust.”

Another concern is a phenomenon called the colony collapse disorder which is when the majority of worker bees leave a hive abandoning the queen and immature bees.

In Pennsylvania, all beekeepers must be registered with the Commonwealth. If the hive is badly diseased, an inspector will recommend it be destroyed.

While he has felt the sting of a honey bee a few times, Barrer said his protective gear is mostly effective and other tools, like a smoker, can help keep the bees calm when he goes into a hive.

“Over time I have become less nervous working with the honey bees," he said. "Most of them are pretty docile unless threatened.”

Honey bees may buzz about, but if they are not near the hive, they won’t sting, he explained. His hives have always been in his wife’s vegetable garden and they don’t bother her. 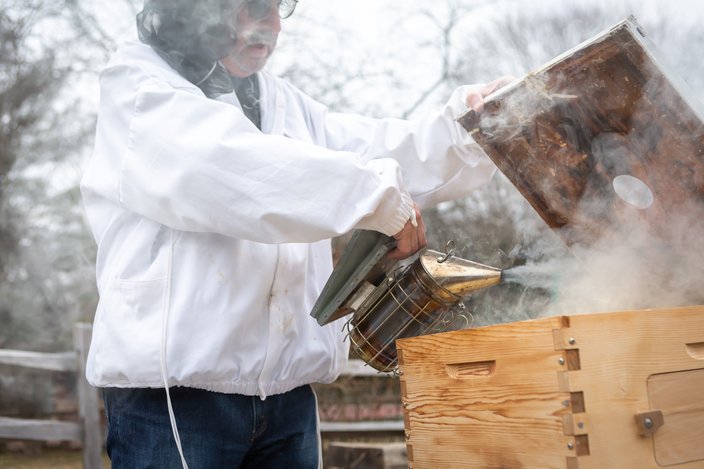 Barrer, who is in the process of setting up his hive for the year, demonstrates how a smoker is used to calm bees when working in or near an active hive. “Not all colonies produce a lot of excess honey,“ he explained. ”The most I ever collected was 10 jars. Last year, no honey, the bees were bums.”

Barrer said there is so much to discover about honey bees from their very structured hierarchy to the way they communicate, excreting certain pheromones to send messages to each other. They even have a special dance for letting each other know where there is a good place to forage.

Beekeepers can purchase a new queen if their current one is not producing enough babies or to diversify the genetic pool, but hives are primarily self-sustaining. Bees will sometimes create a new queen on their own by feeding a larvae only a special royal jelly.

The queen bee can live for up to 5 years if healthy, but worker bees only live long enough to do all the foraging for food, storing nectar, feeding larvae and producing honey. And the mating process is so violent for the male drones that they die postcoitus. As a result, hives are in the constant process of repopulating themselves.

Barrer said that understanding their world and how it is connected to ours is crucial as honey bees continue to disappear at alarming rates because of pesticides, parasites and habitat loss. If we are not able to save them, we put our own food supply in jeopardy.