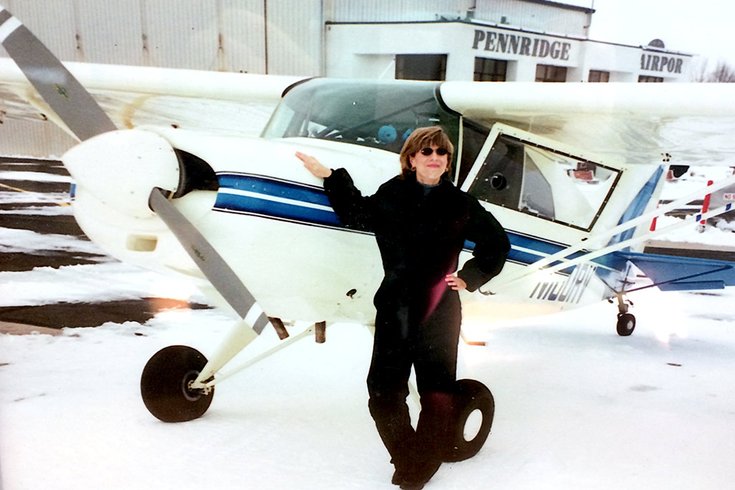 Kathy Devine, an executive with Cooper University Health Care, poses with a taildragger plane at Pennridge Airport in Buck County. She and her husband take weekend trips when they can, and Devine meets up with her female pilot friends to fly somewhere for lunch.

On the ground, Kathy Devine, R.N., DrNP, is laser-focused on providing the best patient care, but when she is soaring the skies, the world opens up to her in ways she never expected.

The senior vice president and chief nursing officer at Cooper University Health Care has her pilot's license, and she can't say enough about how learning to fly has expanded her horizons – from the friendships forged with fellow pilots to working the controls of her own taildragger. It is all about the adventure of flying, and not just transportation, especially at her favorite time to be in the air: right before twilight when day starts to melt into night.

“The bird’s eye views are spectacular and I feel very fortunate that I can experience it,” she said.

Devine was bitten by the flying bug as a flight nurse assisting with aeromedical evacuations onboard a helicopter for 10 years in Georgia. She earned her sailplane license in 1998 and her single engine aircraft pilot’s license in 2013.

To fly a glider solo, she completed 30 to 40 FAA-required flights with a certified instructor, and then went on to become a glider private pilot. That required at least 20 glider flights and two hours of solo flight time in a glider for a total of 10 to 12 hours in the air, and passing a flight exam by an FAA examiner and a written test.

To become a private pilot of a single-engine plane, she had more required flight training, as well as a written and flight exam. FAA requirements include a minimum of 40 hours of flight time, 20 of them completed while flying with an instructor.

Devine first started her journey to the cockpit by joining the Philadelphia Glider Council to take lessons. Once she had her license for sailplanes/gliders, another member of the club offered to help her earn the license for single-engine aircraft.

Meeting at the airport on weekends – that was when her friend had the time – and the weather was cooperative, it was a long process. They tried to spend four to six hours at a time aloft whenever they could, until she logged enough flight time.

Incidentally, she also met her husband – he started gliding at the age of 16 – at the Glider Council.

The couple owns a taildragger which they keep at the Doylestown airport. The taildragger which has a tailwheel is a little different flying experience than planes with tricycle landing gear. With a tailwheel, the plane’s tail looks like it is touching the ground, hence the name. Handling aircraft with a tailwheel requires a higher level of precision in takeoffs and landings, she explained.

Devine said she agrees with most recreational pilots that there is never enough time in the air. She and her husband take weekend trips when they can, and she also tries to meet up with her female pilot friends as much as possible, meeting at the airport hangar and then flying somewhere for lunch.

“Because it is usually spur of the moment, we usually stay local, flying up to Lancaster or along the Delaware River but we have also flown to Vermont, New York, Georgia and Florida,” she said.

She also enjoys the camaraderie and support provided by her membership in the Southeastern Pennsylvania chapter of The Ninety-Nines, an international organization of licensed women pilots whose first president was Amelia Earhart.

Devine and her husband live in South Jersey.