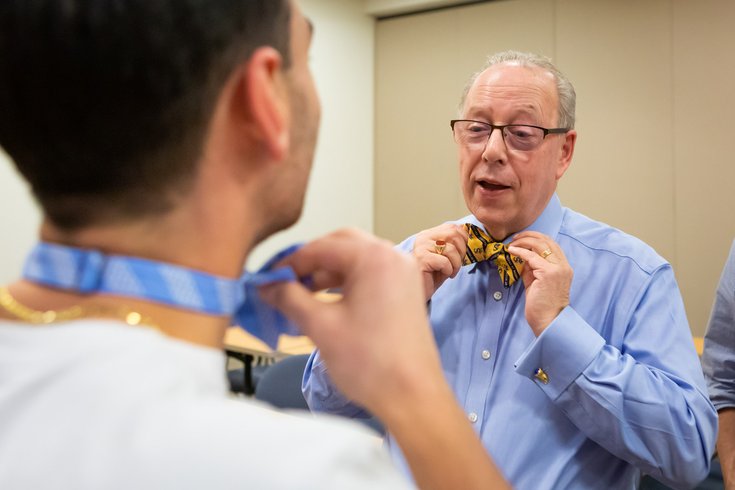 Dr. Daniel Schidlow, dean of Drexel University's College of Medicine, teaches a med student how to tie a bowtie during the "Bowtie School" class he offers at the school.

Bow ties for Dr. Daniel V. Schidlow, dean of the Drexel University College of Medicine and a pediatrician, are so much more than just a fashion accessory. They spread joy and bring people together – and now he teaches the art of the bow tie to others.

It all started when he became a pediatrician. He was a pulmonologist at St. Christopher’s Hospital for Children for 35 years.

The professional-looking ties allowed him to add a note of whimsy to his attire to brighten his patients' spirits. With their small size, he felt more comfortable experimenting with colors and patterns to express himself. And practically speaking, they were less likely to get in the way when examining his young patients.

Schidlow, 71, has amassed a collection of 120 to 140 bow ties. Organized on racks and hangers, he divides them into distinct categories: striped, yellow, orange, animals, favorites, and everything else – which include holiday and school insignia. He even has a couple of American flag bow ties for the Fourth of July and Memorial Day. He is always on the lookout for unique additions.

His penchant for bow ties has become so well-known at Drexel that he was asked to run a “Bow Tie School,” open to all students and faculty members. Schidlow and a couple of other bow tie-wearing faculty members demonstrate how to properly tie a bow tie and share a little of its history. (They were first worn by Croatian mercenaries during the Thirty Years' War in the 17th century.) Food is provided – bow tie pasta, of course.

Frequently, he gives away bow ties for a good cause, whether those from his personal collection or those he sets aside for charity events.

But what makes Schidlow’s collection so special is the joy it brings to so many people. 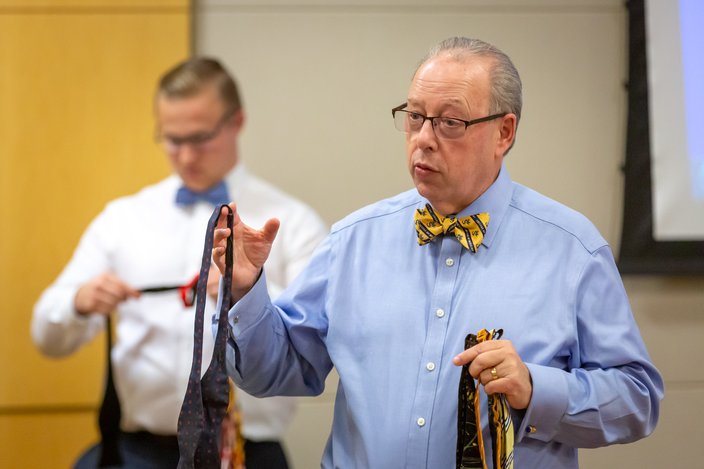 Dr. Daniel Schidlow speaks to a classroom of med students at Drexel University's College of Medicine during “Bowtie School”, a class he teaches about how to properly select and tie a bowtie.

Schidlow is a classically trained singer and a liturgical cantor, and founded a group so that students and faculty members in the Drexel University College of Medicine could share their love of classical music.

“I am a strong believer, as many people are, in the importance of the humanities in medicine,” he said. “I just recently chaired an American Association of Medical Colleges meeting session called ‘Rhythmic Healing: Music in Medicine,’ which explored how music can enhance both psychological and physical healing.”

And music is not just helpful to patients, he said. Having an outside interest of any nature is a great way for physicians to bring balance to their lives, relieve stress and provide different outlets for expression.

Schidlow added that we can all benefit from a larger understanding of the human experience. In his own life, coming from a family of three generations of immigrants has instilled in him a desire to share and connect with others.

Growing up in Chile and moving to the United States after medical school, Schidlow is of European Jewish ancestry. His grandparents were originally from Poland, but his father was born in Vienna and his mother in Berlin. After meeting and falling in love in Berlin, his parents were then forced to flee Nazi Germany in 1939, eventually settling in Chile.

Schidlow, a Narberth resident, came to the United States right before the coup d’état that toppled the Salvador Allende government. Here he met his wife and decided to become an American citizen.

“My background gives me a great sense of gratitude for opportunities given in life as well as a sense of respect for all kinds of cultures and people," he said. "An appreciation for diversity and equality colors both my personal and professional life.”

After eight years as the Walter H. and Leonore Annenberg Dean and senior vice president of medical affairs at Drexel, Schidlow is stepping down in June to explore some special projects.