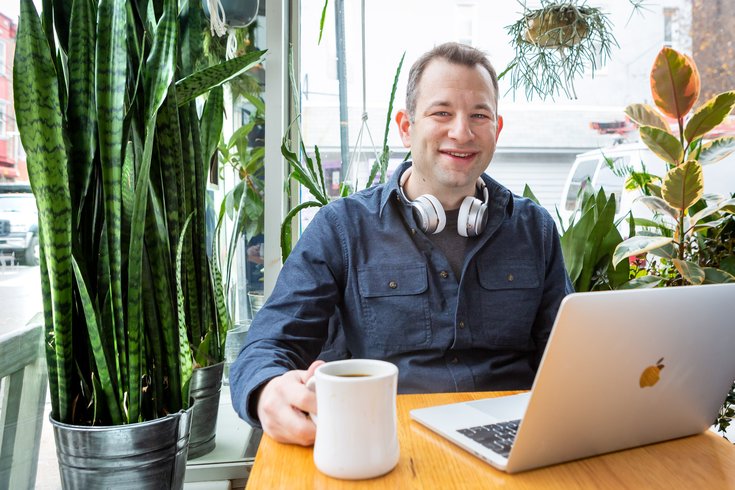 Dr. Jules Lipoff, a dermatologist with Penn Medicine, was photographed at the Hungry Pigeon in Queen Village, where he often works on scripts. As an undergrad, he was an intern at The Onion and Mad Magazine.

“I’d like to rid the world of ignorance, but I don’t know how." – @juleslipoff

A burning desire to bring attention to issues he cares about is what drives Dr. Jules Lipoff, a dermatologist and assistant professor of clinical dermatology at the University of Pennsylvania, in his work both as a doctor and a writer.

And he is not afraid to find unconventional ways to get under people’s skins, to make them think and feel. Even through our obsession with pop culture.

Whether it is exploring how the mythologies of monsters like vampires, werewolves and zombies might be explained by the history of medicine, or analyzing greyscale, the mysterious disease on "Game of Thrones," Lipoff, 38, uses humor and drama to make science accessible to more people.

With his Vox article on greyscale, he says he reached a larger audience that he ever could with his academic writing.

WRITING FOR THE SCREEN

While Lipoff, who lives in Center City with his wife and two daughters, enjoys freelancing for different publications, writing for television and film is his ripest passion. He has written three features so far and is currently working with a screenwriter/producer friend to get his screenplay “High-Five” developed, either for television or film.

High-Five (HI-V) is hospital jargon for HIV patients. In Lipoff’s story, a teenage boy finds out he was born with HIV, but was never told about it. He drew inspiration for this story from his work with HIV dermatology patients.

“HIV, while not a death sentence anymore, still has a huge stigma. Very few people are out as HIV-positive,” he said.

“What I love about medicine is the chance to meet people outside my social circle, everyone from a CEO to a homeless person. As a cisgender white male, I appreciate being able to hear the stories of different communities.”

Lipoff also does medical consulting for the screen. As an informal consultant (meaning unpaid and uncredited) for "The Resident" on Fox, he has collaborated with writers on plot ideas.

“I loved the chance to see the writing process through their eyes," he said. "For them, while accuracy is important, the need to be dramatic and entertaining has to come first. Some exaggeration is expected.”

FINDING HIS OWN PATH

While his creative writing is really taking off right now, making time for it hasn’t always been easy for Lipoff.

As an undergrad, he wrote a lot and interned at The Onion and Mad Magazine, but once he began his medical training it became difficult to keep up with it.

Strangely enough, it was the birth of his children that relit the fire in him, and he began taking creative writing classes at Penn, networking and writing more often.

“I was galvanized by the birth of my children to pursue my creative passions and find a way to integrate them into my medical career,” he said. “Paradoxically, even though having children clearly left me with less time to devote to my writing, becoming a parent taught me how to prioritize and get things done.”

He said he has learned not to obsess so much about perfection in his writing, embracing instead the wisdom of the adage, “perfect is the enemy of good.”

You have to keep plugging away at your writing, he said. On Mondays, he doesn’t see patients so he likes to haunt different neighborhood coffee shops to write. Then the rest of the week he squeezes out a few pages whenever he has some free time – whether at lunch or between patients.

Inspired by a writing process detailed in "The Artist Way," written by Julia Cameron, he has even started writing what Cameron refers to as "morning pages." The idea is to write three handwritten, stream-of-conscious pages. You are not allowed to edit yourself, just let the words and ideas flow.

Lipoff said that Brian Koppelman, co-creator of the Showtime drama “Billions,” pushed the method when they got the chance to talk during the filmmaker’s visit to Penn.