The Phillies bullpen is still atrocious and is undoing their season 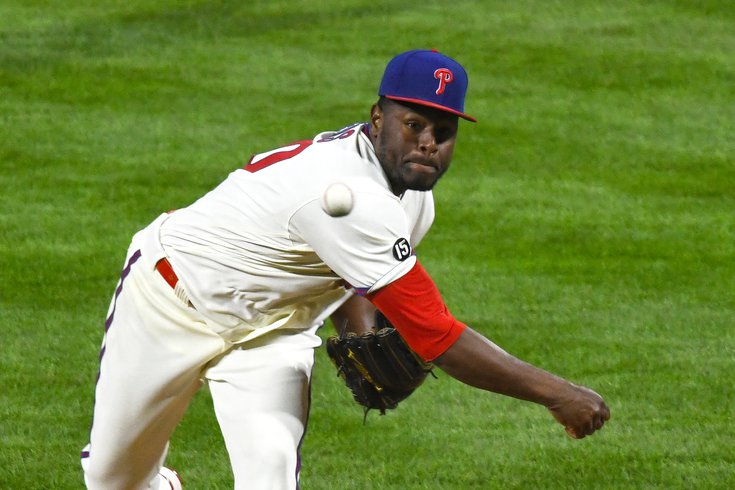 PHILADELPHIA, PA - APRIL 17: Hector Neris #50 of the Philadelphia Phillies throws a pitch during the game against the St. Louis Cardinals on April 17, 2021 at Citizens Bank Park in Philadelphia.

The Phillies just seem to be cursed when it comes to relief pitching.

No lead really seems to be safe and the assumption fans make when the Phillies have a lead (rightly so) is that it would simply be a gift from the baseball gods if the team's bullpen doesn't blow it.

The Phils dropped two games in a row in Atlanta this weekend after winning five in a row before that, and while their most recent setback featured a rare bad day from ace Aaron Nola coupled with a silent offense, make no mistake, this team's biggest flaw right now is still its bullpen — just like it was in 2020.

Starting pitching has typically been a strength this season, but it is appearing more and more to be the only one the team really has. And if a starter has an off day, it's almost a lost cause, due to a mediocre offense and downright maliciously bad bullpen.

The 2021 version of the Phils' pathetic pen may not have the same inflated ERA of last season's unit (it was 7.06, yuck), but the numbers through 35 games are quite telling.

In 37 save situations (which we'll define as times in a game, after the 5th inning, with a lead less than three), the Phillies have had just 17 holds (when a pitcher gets at least one out and keeps his team in the lead). In these situations, Phillies arms have allowed 28 runs, 41 hits and eight home runs — all the most of any MLB team.

Philly's bullpen has pitched with a lead in a league-best 30 games and has allowed 73 runs to score while leading — second most behind the Dodgers. Of the 38 homers their pitching staff has allowed, 25 (a league high) have come when in the lead, and 12 have come in late, close game situations.

Simply put, the Phillies pitchers have no clutch.

Saturday night's extra innings thriller saw Phillies pitchers blow three leads, in the 9th, 11th and 12th innings respectively. The first pitcher to blow a save in the 8-7 setback was closer Hector Neris, who has blown two of eight save situations this year.

“If you look at Héctor’s numbers before last night, they’re pretty darn good. We can't make a lot of one outing,” Phillies manager Joe Girardi said. “I know he’s lost some games, but it’s been a tie game with a runner on second with nobody out. I haven’t made any changes. I haven’t thought about making any changes. Héctor made a bad pitch last night. That can happen in the seventh, too. It really comes down to execution.”

For whatever reason, the Phillies can't seem to execute when the pressure is the highest.

Neris, Sam Coonrod and Jose Alvarado have essentially been the lone trio of reliable bullpen options so far this season — though Coonrod too has blown a pair of saves. They have combined for an ERA of 2.41 in 41.1 innings.

The rest of the Phillies' relievers have a 6.48 ERA in their 68.1 innings pitched.

Having such clear haves and have nots is not a way to approach running a bullpen. If no one else steps up, the pressure on Neris, Conrad and Alvarado will only increase, and these are three young pitchers who could use some help in hanging onto leads. If one or more of them is unavailable, the Phillies can't just write off the end of a game.

And with their starting staff raking in the innings in the early going, expecting Nola, Zack Wheeler and Zach Eflin to pitch eight or nine innings every outing is an unrealistic expectation.

It's early. The 35 games played so far make up only 22% of a long season. Archie Bradley is hurt and perhaps things will level out.

But that's what the Phillies hoped last season, and it didn't happen.

It might be time to add relief pitching to the list of trade deadline needs for the Phillies, as they look to overcome the uphill battle to make the playoffs for the first time in a decade.