Francoeur's grand slam off Bumgarner not enough for Phillies 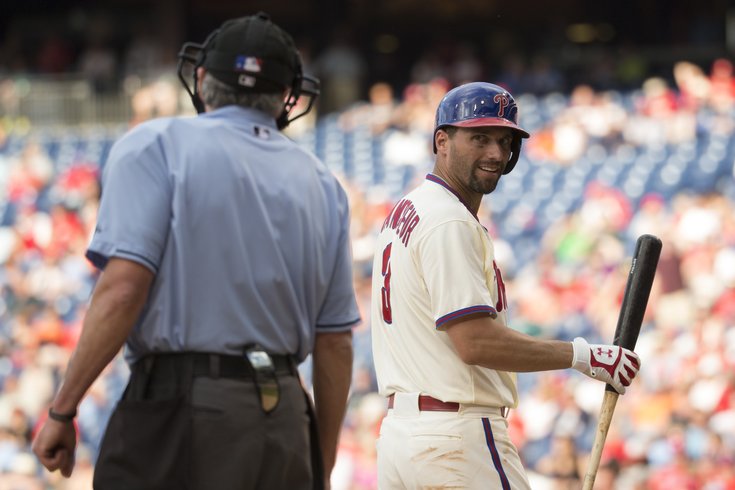 Phillies outfielder Jeff Francoeur reacts after being called out on strikes in the ninth inning.

Even with their top two starters ranking in the top 10 among National League pitchers in ERA, it hasn't been pretty for the Phillies pitching staff recently. And that didn't change Saturday, as starter Severino Gonzalez failed to make it out of the third inning of the Phillies' 7-5 loss to the San Francisco Giants.

His troubles started early, a recurring issue for the 22-year-old righty, who surrendered five runs to the Giants before being pulled and had another tacked on when relief pitcher Dustin McGowan, who was recalled on Friday, allowed an inherited runner to score.

Gonzalez finished with terrible line, and it went a little something like this: 2.2 IP, 7 H, 6 ER, BB, 5 K, 2 HBP, and a balk that plated a run on 83 pitches (49 for strikes). He was also struck on the back of his throwing hand by a liner in the top of the first inning, but was able to stay in the game.

Meanwhile, Giants starter and reigning World Series MVP Madison Bumgarner was mowing down Phillies hitters, needing just 24 pitches* to get through the first three innings -- that's the same three innings that the Phillies' combo of Gonzalez and McGowan needed 89 pitches to get through.

*All but two were for strikes.

Giants Starter Madison Bumgarner is 34-1 in his career when he gets 6+ runs to work with - #Phillies have work to do!

And while it looked bleak to that point -- the Phillies had just one hit their first trip through the order -- they were finally able to get to Bumgarner in the fourth. And they did so in a big way.

Here's the set up:

That loaded the bases --still with no outs in the inning -- for right fielder Jeff Francoeur, who blasted a grand slam off MadBum to put the Phillies on the board and cut the Giants' lead to 6-4. [Video]

That wouldn't be enough to spark a comeback for the Phillies, who went on to lose 7-5, adding a run in the eighth on a solo shot from Andres Blanco. They'll look to avoid the sweep tomorrow when Sean O'Sullivan faces Ryan Vogelsong at 1:35 p.m. in the series finale.

Some observations from the game:

The opposite of run support

The Phillies pitchers haven't been doing themselves any favors lately. With an offense that has struggled to provide much of anything, the staff needs to keep opponent scoring to a minimum, and that hasn't been the case lately.

The Phillies have allowed four or more earned runs in each of their last 12 games (dating back to 5/24), and not surprisingly, they've gone 2-10* during that stretch:

*Their only two wins, both against the Reds, involved late-game comebacks and ended in walk-off fashion.

That's tied for the fourth longest streak in franchise history (stats hadn't been updated from Saturday's game, so it's still listed as 11 games):

With an offense that ranks last in the National League in runs scored, slugging and OPS -- and second to last in team batting average and on-base percentage -- the pitching really needs to be better if they hope to win.

Part of the problem has been that the Phillies bullpen ranks dead last in allowing inherited runners to score, a stat they didn't improve upon Saturday, as McGowan started his day by allowing the Giants to score.

Overall, however, the bullpen pitched well on Saturday, allowing just one more run the rest of the day. McGowan tossed 3.1 scoreless innings to help keep the Phillies in the game, something manager Ryne Sandberg acknowledged after the game.

"The bullpen did a good job in this one," Sandberg said to begin his postgame meeting with reporters. "McGowan gave us a chance to stay in the game."

And Francoeur, who provided most of the offense for the Phillies, also pointed to McGowan's three innings as crucial to helping the Phillies remain in the game.

He also had an RBI single of his own.

Regression to the mean

After the game, Sandberg said his shortstop has been "a little jumpy" at the plate and that he's been working on staying back on the ball, but has continued to get out in front, even when he makes contact (which he hasn't done much lately).

Doubt they'll show this on SportsCenter though, like the did with this guy last week:

And perhaps the best part was when the two people sitting in the empty seats next to him returned a minute or two later, only to realize they missed their chance at 15 minutes of their own.

There were a lot of nice goings on down at the park today to honor those who serve our country, and perhaps the coolest of them was this:

The National Chair of Honor will permanently be located in Section 110, Row 40.

This was also cool:

Here's a look at Sandberg's meeting with the media following the loss: