5 awards from Phillies' series loss to the Mets 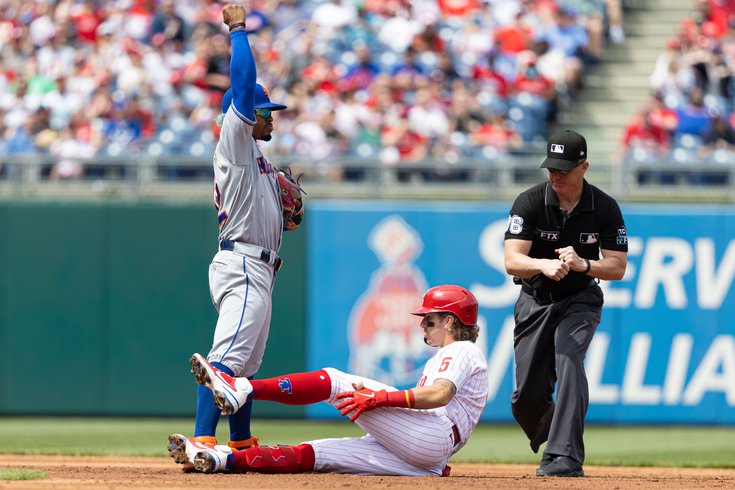 The Phillies were not at their best this week against their New York rivals...

Just like with everything else in recent Philly sports history, the 2022 Phillies have shown fans — like the James Harden era Sixers or the Jalen Hurts Eagles — if it is too good to be true it probably is.

Early in the season, there is no reason to panic or even worry about these Phillies, but their lack of offense against the Mets after a flashy start to the year (four-run comeback not withstanding) is noteworthy and a recipe of what exactly the team must avoid going forward as they try and end a decade's long playoff drought.

As we intend to do after every single series the Phillies play this season, here are some awards for the Fightins following their second set of games vs. the New York Mets:

• On Monday, the Phillies overcame a slow start and used a 5-run eighth inning to beat the Mets 5-4.

• On Tuesday, the Phillies bats fell silent for all nine innings, faltering 2-0 in Zack Wheeler's 2022 debut.

• On Wednesday in the rubber match, Aaron Nola couldn't get out of the fourth inning and the staff walked six and hit two batters with yet another late arriving offense in a 9-6 series losing effort.

After posting an ERA of 3.00 in their series win against the Athletics to start the year, the Phillies had an ERA of 5.00 against New York. And after six games, a chasm between the haves and have nots in the bullpen seems to be forming. On the year, ace relievers Brad Hand, Corey Knebel and Jeurys Familia have yet to allow a run, have nine strikeouts and just two hits allowed in a combined five innings. Lets also include Seranthony Dominguez and Nick Nelson in this group, as each has a lone run in 3.2 and 4.0 IP respectively from the pen — with each contributing in key spots in the Mets series.

The rest of the bullpen — Bailey Falter, Connor Brogdon, Jose Alvarado and Chris Sanchez, have combined for an ERA of 8.84 on the year, and have twice as many walks as the first quintet of pitchers. It will be interesting to see if this stark contrast between effective relievers and hindering arms continues as the season progresses.

It wasn't a great series for Philadelphia's most optimistic fans. The Phillies' defense was atrocious against New York, and their power was nowhere to be found. Realmuto's blast in the eighth inning in Game 1 of this series is and Bryce Harper's ninth inning blast in Gams 3 were the lone long balls they hit against a team with what is admittedly one of the better pitching staffs in the NL. The Phils began the season (in an extremely small sample size) on pace for 270 homers on the year. After the conclusion of the second series, they're on pace for 189 dingers.

Six games is nothing in baseball, it's less than 4% of the entire season, but the exact things that doubters or skeptics were concerned with reared their heads immediately to start the year. The Phillies roster is built in a mode akin to an NBA team relying entirely on three-point shooters that has no reliable stoppers on defense. If the shots fall, they're unstoppable. If they do not, they're hard to watch. The Phillies have some time to prove this experiment can work in baseball.

Yes, his offense lifted him and actually propelled the Phillies to their first big comeback win in two years (despite his three errors). But everyone knows offense bends toward the mean, and defense — well, defense is defense. It is probable that the Phillies former top prospect Bohm will continue getting reps in the field early in the season, but it seems more and more likely that he will need to hit like an absolute fiend to be able to stave off Bryson Stott and Johan Camargo from eventually taking over the third base job. He also has a slim chance of carving out a DH role, because the Phillies won't have room for both Kyle Schwarber and Nick Castellanos without the DH role.

Basically, Bohm needs to quickly get better in the field, or he might find himself in Triple-A again — or on the trade block. Ironically, Bohm was highly considered as a potential winner from the series. His wild ride from being hated to loved in less than 24 hours is a new record for this fan-crazy city and you can read all about it here.

The Phillies shiny new power hitter debuted with the team with three straight strikeouts back on Friday against the A's. Since then he has been on base eight times, and against the Mets he got at least one hit in each game including two doubles, an RBI and run scored in the business person's special on Wednesday.

Up and down this lineup you see hitters on relative cold streaks, and Castellanos shined in the Mets series and can hopefully carry his momentum to South Florida. On the season, the new acquisition is hitting .309 and leads the Phils in at bats, and is second in batting average and slugging.

The Phillies jumped ahead in their first two games against the Athletics this past weekend and what do you know, they won both affairs. In the four games since, the Phillies have not scored first, and while this Phillies team is built to be able to comeback in nearly any situation, that's not a winning approach for four consecutive games.

Getting behind early puts more stress on the starter, and can lead to some pretty bad at bats with hitters or base-runners perhaps taking chances they otherwise wouldn't. An example of this happened Wednesday afternoon, with the first hit of the day coming off the bat of Bryson Stott, who proceeded to be too aggressive and get thrown out at second trying to stretch a single into a double. Getting guys on base is key for a roster packed with home run hitters, and perhaps this team needs to lean on the conservative side when trailing and led the hits, walks and opportunities come to them.

Looking ahead: Welcome to Miami 😎

The Phillies fly south to Miami for a four-game set with the Marlins starting Thursday. The first three are 6:40 p.m. starts with the Sunday matinee starting at 1:40 p.m.

Every starter, save for Nola, who pitched Wednesday, is in line to start for the Phillies in the four-game series. Last season, Philly went 9-10 against the Marlins (who had a gruesome 67-95 record) and the year before that they were 3-7.

The team will obviously need to buck that trend and find a way to take advantage of playing a team expected to finish at the bottom of the division 19 times this season. It could literally be the difference between their playoff berth or another mediocre season. Handling the Marlins young talented starting pitching staff will be the key matchup of the weekend series.