Why the Phillies are built to be comeback kids in 2022 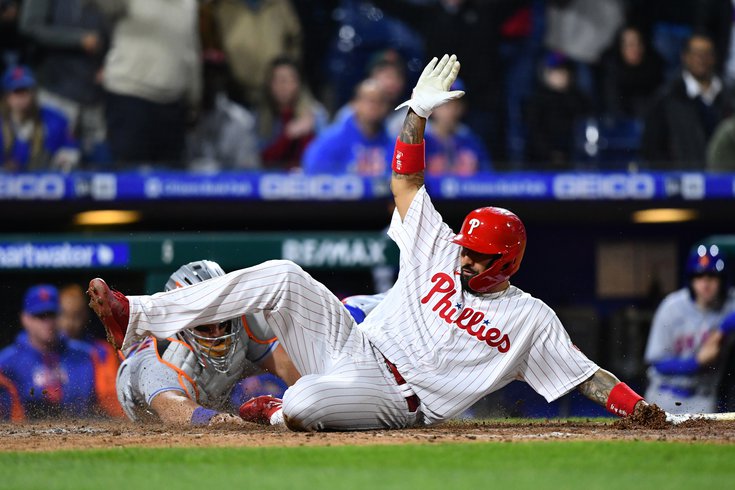 Kyle Schwarber showed he has some wheeled Monday night in the Phillies epic comeback victory.

Over the last two seasons, if the Phillies were losing a ballgame by more than a few runs at any point in the game, you might as well head home from the ballpark to beat traffic, or flip on Netflix to rewatch "Better Call Saul."

For a variety of reasons, the Phils, who haven't sniffed the playoffs since Chase Utley and Jimmy Rollins were turning double plays, were unable to really play from behind in any way shape or form over the past few years (or really for the past 10).

The Phillies had lost 54 straight games when trailing by at least 4 runs in the 8th inning or later... until Monday.

Their comeback win vs the Mets was the first of its kind since August 2019, when they trailed 5-0 to the Cubs and won 7-5 on a Bryce Harper walkoff grand slam. pic.twitter.com/dLvluyakrb

That all changed Monday night, when — behind by four in the eighth inning against the New York Mets — a J.T. Realmuto two-run homer sparked a rally that would end in a 5-4 Phillies comeback win.

So where the hell have these comebacks been? Well, there's some blame to go around. And fortunately, it appears Dave Dombrowski and the Phils front office had a plan this season to do things differently.

The Phillies have had two of the worst bullpens in franchise history in 2020 and in 2021, and the team almost completely turned over the unit in 2022 — a strategy that could end their playoff drought.

The roster size is two players larger right now and will be cut to 26 men on May 1. But as you can see, only two holdovers from last season made it onto this squad and with good reason.

Before making any splashy signings, like they did in inking Kyle Schwarber and Nick Castellanos to monster deals after the lockout ended, the Phillies addressed the bullpen, signing veteran relievers Knebel, Hand and Familia to the roster. A healthy and seemingly dominant Dominguez appears to be back in the late inning fold.

Having arms like the ones the Phillies built their bullpen around are pivotal and are a major reason why comebacks will be much more prevalent in 2022. After Ranger Suarez got knocked around early by the Mets in Monday's game, the pen stepped in and kept the game within reach. A year ago, the Mets would probably have been up 7-0 or worse before the Phillies were able to rally late.

If the arms can keep it close, the bats can explode at any moment...

It's a simple explanation but an extremely accurate one — the Phillies lineup is built for comebacks like the one they had against their rivals from Queens. Almost every single member in the batting order can go yard at the drop of a hat. Four regulars hit over 27 homers last year and at least seven could easily hit 20. In fact, Bryce Harper, Rhys Hoskins, Castellanos and Schwarber are among the top 44 hitters with the best odds of leading MLB in dingers this year.

The team also has patience at the plate, with Schwarber — the leadoff man — able to draw walks a plenty and Hoskins one of the best in the game at working the count. The Phillies combination of patience, power and depth is one that will fuel a great many comebacks. If Hoskins is slumping, for example, there is still Harper (who is one of the few Phillies yet to hit a homer this year), or Realmuto, or even Didi Gregorius (Monday's hero) who can blister the ball.

The Phillies don't have any easy outs and they are able to make their terrible defense irrelevant. Alec Bohm had three errors Monday, but he is also hitting 1.000 this year, having been on base all six time's he's been at the plate. That is the Phillies in a nutshell, and taken to the extreme, but if they are able to make their fielding blunders irrelevant this team could really go far.

Last season, the Phillies had just three starting position players with postseason experience (Andrew McCutchen, Harper, Gregorius). They also had very few of them amongst the pitching staff.

In adding Schwarber (35 playoff games), Castellanos (5), Hand (3), Knebel (16), and and Familia (14) the team has nearly doubled the postseason experience on the roster. Having players who have been there and know how to perform under pressure is what the young guys — like Dominguez on the hill or Bohm and Stott at the plate — need to have in the clubhouse.

It's also the mentality. Here's what Hoskins said after the team signed Schwarber and then Castellanos in March (h/t The Athletic):

“In Nick, although he may not have experienced the winning, he has, for lack of a better phrase, that ‘(bleep) you’ mentality,” Hoskins said. “When it’s time to put the boxing gloves on, and it’s coming down to it, I want that guy in my corner. Those two, I’m sure we’re going to get some great stories. We’re going to get some great experiences. We’re gonna lean on those guys heavily.” [The Athletic]

The Phillies may or may not wind up having enough ammo to contend in a loaded NL East with the Mets and Braves expected to breeze to the postseason by many, but they have the best chance they've had in a decade thanks to a thoughtful roster built by a front office with a palpable strategy.

The comebacks could, and should, keep coming. Which means there's no excuse for leaving the ballpark early this year.