5 overreactions from the Phillies' first series of the season 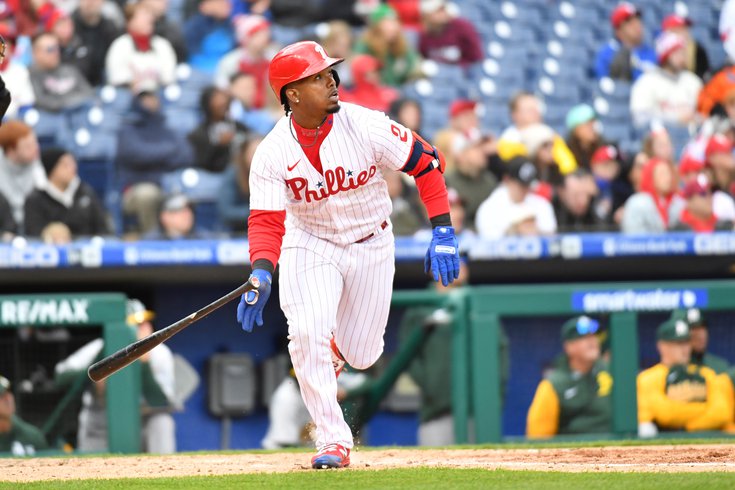 If you smash it, they will come.

The Phillies got out to a 2-1 start after their opening weekend set against the Athletics. This team has more hype and positive energy surrounding them than the franchise has seen in over a decade. The horrid April weather conditions on Sunday aside, this was as entertaining of a series to lead off the season as a Phillies fan could've hoped for.

I'm not in the business of game recaps. I am in the business, however, of takes. This is the smallest of sample sizes certainly. The Phils are fun again though, so let's have some fun. Let me rattle off some takeaways from this past weekend:

There Will Be Dingers

The Phillies are going to hit a lot of home runs. A lot. I mean, seriously, a lot. Through three games, the Phillies have the second-most homers in the National League with five, training the Cardinals with six. Kyle Schwarber led off the entire season and his Phillies career with a blast to right field. Rhys Hoskins and Nick Castellanos mashed in a win on Saturday with one a piece. Jean Segura, surprisingly given the dudes around him in the lineup, leads the team with two. This is all without Bryce Harper, the Phils' best slugger and perhaps the best power hitter in the whole NL, being hot.

In my Phillies predictions column ahead of Opening Day, I predicted that four Phillies would top 30-plus home runs: Schwarber, Castellanos, Hoskins and Harper. Maybe Segura can crack 20 for only the second time in his career? Either way, I still believe this team will set the franchise record for home runs in a season, which has stood since the 2007 team went yard 213 times.

Aaron Nola turns 29 in June. His splendid 2018 season where he finished third in National League Cy Young voting and had a 2.37 ERA in 212.1 innings increasingly feels like an outlier season for the right-handed pitcher. Nola is obviously still a talented pitcher, but the idea of him as a frontline ace (not an ace in the sense of the best pitcher on a team, but one of the best in the entire sport) is evaporating in my mind.

In six innings of work on Opening Day, Nola surrendered four runs. His seven strikeouts were nice, putting him a hair above his career 10.1 strikeouts per nine innings mark. I still worry when I envision him taking the mound in Game 2 of a playoff series, the Phillies' first in 11 years, and having to mow through a talented lineup while going deep into a game and minimizing the damage this erratic bullpen can do.

Rhys Hoskins should be the No. 2 hitter

This isn't a criticism of J.T. Realmuto's quiet first two games as much as it is a call for Hoskins to get more plate appearances. The better hitter should hit more often! Realmuto provides oodles of value as a catcher, but doesn't crush the ball the way other players in this Phillies lineup do. Having a stronger righty to mix up this lineup is key. Schwarber as a lefty, then Hoskins as a righty, Harper as a lefty and finally Castellanos as a righty protects the Phillies to a higher degree from opposing relief pitcher shenanigans.

I miss the Mick

In a stacked lineup, I would've loved to have seen former first-overall pick Mickey Moniak get the opportunity to cement himself as the Phils' centerfielder of the future after a strong spring. Matt Vierling went hitless in eight at-bats. This isn't really a criticism of Vierling, whose Statcast numbers illustrate that he's been making good contact and a victim of a bit of bad luck:

More people guessed it than I’d thought would.

Yes, this impressive (small sample) Baseball Savant page belongs to MATT VIERLING! Also known as the only Phillie without a hit to start the year!

An unlucky first series, but give him some time. He’s looked sharp. https://t.co/NQMFe0PqYy

If Moniak returns to the field in May and Vierling hasn't grabbed a hold of the CF job, there's still time for it to be the Summer of Mick.

The concerns about the Phillies' defense are overblown

As Chip Kelly once so eloquently put it: "Score f*****g points. What's your plan?" Keep the dingers coming and people will stop whining about the Phillies having, like, four DHs in their starting lineup.