Alec Bohm could've folded after any of his three errors Monday night. He didn't. 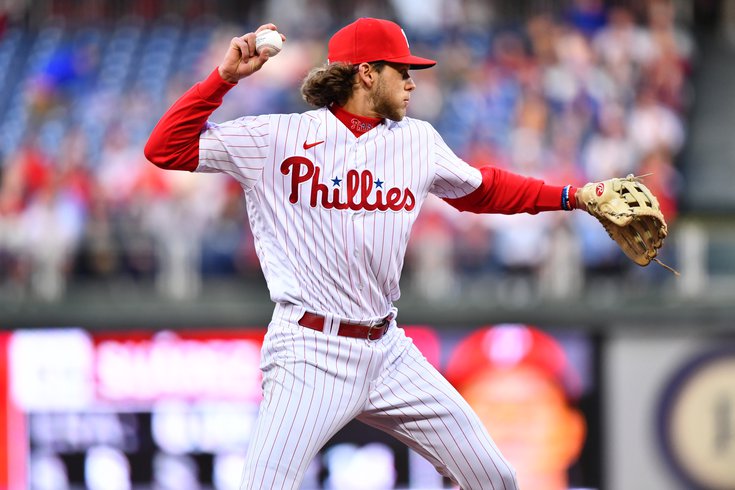 It sucked. It sucked to watch, and for Bohm, to be right in the middle of it.

Naturally, fans booed, social media was livid, and the folks watching at home were screaming at their TVs to bench him.

Alec Bohm has made three throwing errors in three innings tonight. Here they are: pic.twitter.com/sQ1VHKX7cW

When he did connect on a routine play in the top of the second, because Philly, in came the sarcastic cheers.

"I f***king hate this place," Bohm got caught saying to Didi Gregorius on the broadcast feed.

He was frustrated and got captured in the heat of the moment. Word spread quick.

Alec Bohm confirms postgame that he said "I fucking hate this place" when fans sarcastically cheered after he made a play pic.twitter.com/I0IdZ0lEn9

Nine times out of 10, especially of late it feels, this probably would've been the breaking point for a pro athlete's tenure in Philly. The next day's fallout would have had irate fans trying to run the guy out of town (You know you can hear the calls into WIP in your head right now).

But for Bohm, who was already in a tough spot coming in, none of that happened. Instead, he might have walked away with the city fully behind him.

He could've folded after any of those three throwing errors. He didn't. Instead, Bohm doubled in the fifth and drew two walks, with the second becoming the starting point for a five-run rally in the eighth. He went first to third on Johan Camargo's single in the next at-bat, then scored on a Kyle Schwarber groundout to get the Phillies' comeback win over the Mets going.

He could've deflected responsibility or flat-out denied what he said postgame. He didn't do that either. Instead, he completely owned up to it.

"Look, emotions got the best of me and I said it," Bohm explained. "Do I mean it? No. It's a frustrating night for me, obviously. I made a few mistakes in the field...Look, these people, these fans, they just want to win, and I mean, you heard it, we come back, they're great."

"So you love this place?" the follow-up was asked.

"Look, emotions got the best of me. I said it. Do I mean it? No. It's a frustrating night for me, obviously. ... These people, these fans, they just want to win. ... I don't mean that." pic.twitter.com/Q7VZ2aBoAg

The 25-year old third baseman, who entered just his second full season as a regular major leaguer, has had about as rough an introduction to the show as anyone. He hit a promising .338 with an .881 OPS in 44 games of the pandemic-shortened 2020 schedule but struggled — defensively and at the plate — so badly in 2021 that he was sent back to the minors for a month.

In spring training, those struggles continued, and with top shortstop prospect Bryson Stott able to play third and breathing down his neck for the starting job, Bohm came into 2022 under immense pressure.

"It's not an easy game," manager Joe Girardi said of Bohm postgame. "I look at the first error, which I think kind of led to the next couple, he was trying to do too much. He should've ate the ball. That's just understanding your clock inside with a baserunner that runs as well as [Starling Marte]. I think he rushed the throw, it led to an error and it kind of led to a couple more.

Alec Bohm with another double! pic.twitter.com/nbgXrTbHu5

Granted, it's a small sample size, but Bohm is batting a 1.000 to start the year. He went 2-for-2, doubled, and walked in Saturday's win against Oakland, then walked twice and doubled again in the comeback over the Mets to finish the night 1-for-1.

But above all else, Bohm showed Monday that he won't back down and he sure won't break.

He'll own up to his mistakes and try to come back better.

In other words: He's the exact kind of player Philly loves having around.

"I think it's pretty f***ing easy, to be honest with you," Eagles center Jason Kelce said in October, back when the Ben Simmons saga with the Sixers was at its peak. "You go out there and play hard. Want to be loved in this city as a baseball player? Run to first base. They're going to f***ing love you."

It probably should have all fallen apart after Bohm got caught saying "I f***king hate this place." But it didn't. He recovered beautifully.

There are still questions surrounding his future with the Phillies, but after Monday night, one thing is clear: He gets it.

Alec Bohm is all right.