Two years ago, the Krew peered through the centerfield gate to catch the only live glimpse of Phillies baseball they could. On Friday, they returned to watch Game 1. 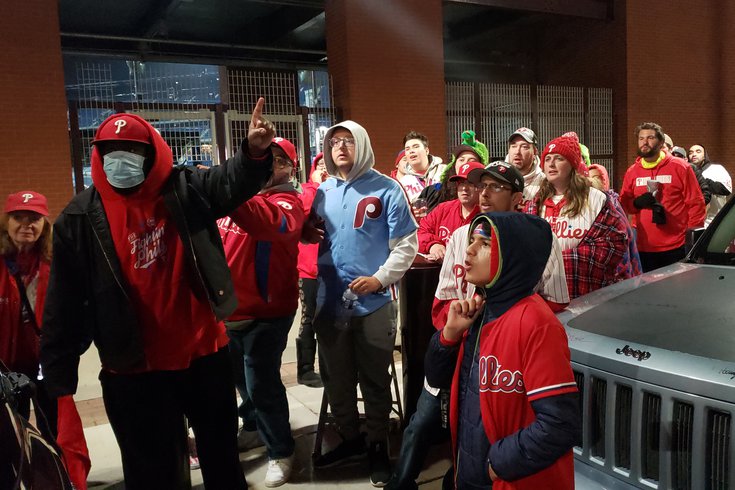 The Phandemic Krew watches Game 1 of the World Series outside the centerfield gate of Citizens Bank Park on Friday night.

The circumstances are far different now, yet it all felt the same as it ever was for the Phandemic Krew.

Two years ago, still at the height of the COVID-19 pandemic, Phillies die-hards Brett MacMinn, Oscar Alvarado, and a group of dedicated fans gathered outside of Citizens Bank Park during home games and peered through the centerfield gate. It was the only way to catch a glimpse of Phillies baseball in person that summer.

On Friday night, the Bank was still closed. The Krew, having since grown in numbers and affinity, was still assembled in that same spot outside. But now it was to watch a TV out the back of one of their cars or to angle themselves to where they could see one of the monitors in Ashburn Alley.

Now it was to see the Phillies play Game 1 of the World Series down in Houston.

"You can tell nothing changed," Alvarado said. "We kept it to our roots. Still watching Game 1 of the World Series here at Citizens Bank Park. Everyone I can see out here, probably a good 40 people out here, we all know personally. We became friends then family."

Same as it ever was.

"It's kinda weird," MacMinn said. "I was telling my wife about it with the World Series, like it doesn't feel like the World Series, and she said 'Yeah that's because you're still doing the same thing you've been doing for the past'...You know, it hasn't stopped.

"You continue to go to games and hang out with the same people and all that. It's been exciting, to be honest with you. I've been around these same people all year, inside and now we're outside obviously for tonight, but it's been a fun ride all year."

And it continued with a fun, though often nerve-racking, Game 1. One that saw the Phillies climb out of a 5-0 hole to win in 10 innings. None of it came easy, and in a lot of ways encapsulated what's already been a wild ride of a season down into just one night.

"There was a retrospective of the season and there were some things in it that felt like they were 10 years ago," MacMinn said. "Even like the end of the season when they were slumping in Chicago and everyone was griping like 'Oh man, the Phillies doing Phillies stuff, coming up small in September,' that seems like so long ago too. We got hot, man. The team got hot at the right time."

It can still be a bit of a shock to realize momentum has carried the Phillies this far though, especially when two months ago, no one could even be sure this team would make the playoffs.

"I did not anticipate this at all," said Todd Orodenker. "The ride's been fun. It's been mostly nonsense, but it's been fun. It doesn't have to make sense. It's happening, but it doesn't make any sense. These last three weeks have been the most fun I've had with any sport. There was the Eagles' '17 run, but this has been a blast. The games have been unbelievable. The city, and everybody getting behind them, it's been great."

Orodenker, from South Philly, got involved with the Krew at its start back when Major League Baseball was trying to get the COVID-shortened 2020 season off the ground. When the Phillies were in a condensed training camp, he would ride his bike down to FDR Park to watch the players train from afar, then head over to the ballpark for whatever he could see of the scrimmages from outside.

At that point, he recalled, nothing was going on yet, but then the season started and he saw the first game on TV. There was a small group of fans by the gate outside of Ashburn Alley. He joined in.

"Came out, had a good time. We all got to know each other, it took off," Orodenker said. "You meet a lot of cool people. It's all happened pretty organically. Like there was no plan behind this. Oscar and Brett are good organizers, so it's good that they were the ones behind this."

Brittany and T.J. Irwin found out about the Krew because of canceled wedding plans. The two got married in 2020 and had a suite reserved for their reception when the Angels were originally scheduled to come to town. COVID, like it did for everyone, had other ideas.

Fortunately, they were still able to get their wedding photos taken outside the ballpark – in bride and groom customized Phillies jerseys – which is where they met MacMinn, leading to them coming back to watch a game soon after.

"Well if we can't go in, we'll go join these crazy guys outside," Brittany joked, but in all seriousness: "We heard about these guys here at the stadium and came by and ended up having the best time watching the game. Just the nicest people. We ended up coming back here with our kids and it just went from there."

T.J. said he never thought that, two years later, a World Series game would be one of the ones they'd be joining the Krew outside for, "but it's not hard to imagine hanging out with these guys and everybody here. Inside, outside, two years later and two more years from now, however long."

Early last season, as the ballpark was gradually opening back up to fans, Beth Overmier went to a game with her son Nolan. There was a friend he wanted to go meet in the 300 level in right field. Instead, he found Alvarado and the Krew, who he recognized from videos on social media. He went up and introduced himself. Alvarado invited him and Beth up to the section. They've tagged along ever since.

Michael Kulp joined about a month or two into the 2020 season. A lifelong Phillies fan, he loved the feeling of going to the ballpark and saw the Krew out there every day by the gate. He wanted to be out there too. Since the NL Wild Card clincher against St. Louis, his car has been adorned with signatures and drawings from fellow Krew members and has carried through for every round.

"We were having fun," he said. "I was like 'alright, let's sign the car! This could be fun! See where it leaves us.'" (Don't worry, it's all dry-erase marker, it'll wear off...hopefully).

Eric Garcia has been friends with Alvarado for years and was invited the third game into the Krew's existence. He kept coming back out, eventually started bringing his family, and over time, saw more and more people too.

November Palmer watched from afar on social media until the stadiums started opening back up. He's since traveled with the group to D.C. to see the Phillies on the road and to Reading for a minor league game.

Chris Foley was the first to think to bring a ladder to get a better view over the gate. He also dresses up like Waldo, something he originally did for the Temple-Notre Dame college football game years ago and decided to keep around for the Phillies. He made it his thing, he said, it draws attention no matter what. "Is it weird? A little bit. Do I enjoy it? Of course."

But as everyone watched the game, shared all their excitement over this miracle postseason run, and reflected on how far things have come – for the team and themselves – in the past two years, "family" was the word that always came up when describing the Krew.

"Definitely. It's not a group anymore," Garcia said. "It's a family. At first, when we all met, none of us knew each other. But over time, more and more games, we all come out, our families come out here, we're all family now. It's no longer a group or just friends. Most of us consider each other family."

"It's really cool that two years later, we're all still here," MacMinn said. "Remember part of what the Krew is and why we came together is there are a lot of people who want to do Phillies stuff but don't always have the people to do it with."

The family that developed by the centerfield gate is now three wins away from seeing the Phillies win it all. They'll be right back out there for Game 2 on Saturday night.

Same as it ever was.