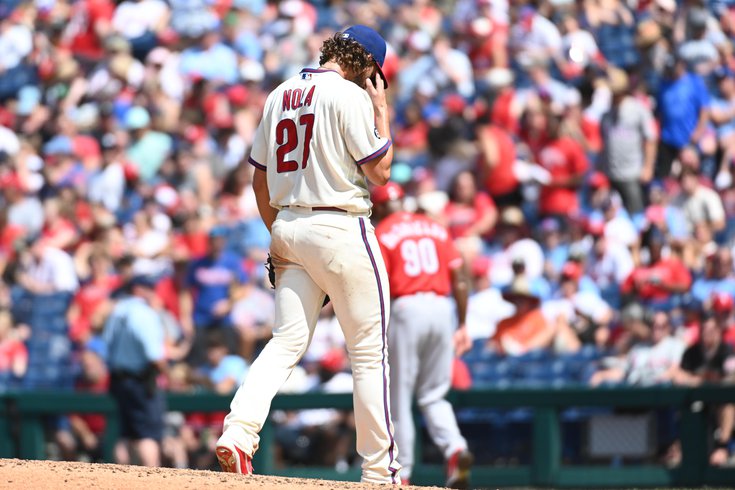 The Phillies have not gotten nearly enough quality pitching from Aaron Nola.

The Phillies fell out of first place this weekend and the magic of last week seems to be gone.

With the much more potent Braves holding court in first place (by one game as of Monday), things do not feel set up for the Phils to win the division right now. For what it's worth, the Phillies, who had a strong betting advantage via the sports book community after they swept the Braves, are now handicapped at +200 by DraftKings — via Pickswise — with Atlanta sitting at +110.

While things are close, the Phils' playoff odds are down to 35%, to Atlanta's 59%. This is where Phillies fans are kind of used to being, and things are trending in the wrong direction.

Here are some reasons why:

Zack Wheeler is a Cy Young candidate. And Philadelphia traded for veteran Kyle Gibson who through three starts in Philly has been as good as advertised. But it would be nice if the Phillies had at least one more pitcher in the rotation they could rely on.

Zach Eflin is nearing a return (more on that in a bit) but in his absence, the Phillies have been trotting out some combination of Matt Moore, Chase Anderson, Ranger Suarez or bullpen games two out of every five games.

Aaron Nola, who was nearly a Cy Young winner himself a few years ago, has been dreadful of late. In his last nine starts dating back to June 19, Nola has a 5.51 ERA with the Phillies losing six times. He went six or more innings just two times over that span.

Some of that is bad luck. Opponents over that nine-game stretch hit just .232 off him, with a .304 average on balls batted in play. He's struck out 65 batters and walked just 10 while relenting one homer per game. However, throughout his career, Nola hasn't been better as the pressure has increased. In 27 career starts in September, and October, Nola has a 4.28 ERA.

If he doesn't become a No. 2 who can win games behind Wheeler, the Phillies are in trouble. He has about eight starts left.

The lineup is lopsided and injured

The Phillies are 118 games into the 2021 regular season. Every single offensive starter has missed double digit games.

Bryce Harper, J.T. Realmuto, Andrew McCutchen, Rhys Hoskins, Didi Gregorius and Jean Segura have all been in and out of the lineup, and replacements Brad Miller, Travis Jankowski, Luke Williams and others have not been able to bridge the gap.

And as a result, the Phils offense is stagnant, unable to continue momentum from game to game.

“We’re just not hitting right now,” manager Joe Girardi said a few days ago after a loss to the Reds. “We’ve got to get going, obviously. We’ve got some guys struggling a little bit. Tomorrow is a new day.”

In the six games since their eight-game win streak ended (6.9 runs per game), the Phillies have averaged 2.5 runs per game. They are 2-4 in those games.

The Braves are probably better

Just glancing at the standings and some basic stats can tell you a lot about the race for the NL East.

The Phillies aren't as good as the Braves are. The two teams play each other just two more times, at the end of September in Atlanta.

The Phillies have the easiest remaining schedule left in the entire league — with games against the Rays, Brewers and Padres obviously looming, they offset it with two series vs. the last place Diamondbacks, as well as plenty of division games against the Marlins and Nationals. Unfortunately, the .440 combined winning percentage of their final 44 opponents is not much worse than that of the Braves, who have a combined .484 percentage coming down the home stretch.

If the Phillies hope to gain ground and really seize first place again, they'll need to do it by going on another run, not by relying on Atlanta to collapse like the Mets did a few weeks ago.

Can Zach Eflin, Seranthony Dominguez save them?

The key, aside from execution of course, is the Phillies getting healthy. Rhys Hoskins should be back in the lineup soon, and Zach Eflin is in the minors rehabbing from a knee injury and is facing live hitters for the first in a while. His addition to the staff will be a huge boost.

Dominguez has been working his way back, slowly from Tommy John surgery and could help the bullpen, particularly late in games, where he previously excelled.

The talent is there for a playoff contending team. But there are some serious hurdles ahead and the team will need to have its full compliment of pitchers and hitter if they want to be in the mix come the fall.