Phillies Notes: Mackanin on why Phils decided to pitch to Bryce Harper 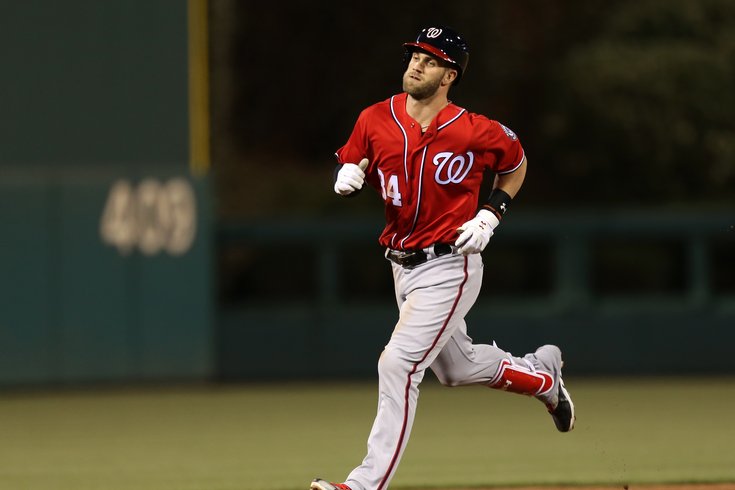 Bryce Harper hit home runs in all three games this weekend, has homered in each of his last six games in Philadelphia, and hit five of his 42 home runs last season at Citizens Bank Park. So why were the Phillies still pitching to him?

Before Freddy Galvis played the hero and Jonathan Papelbon played the goat, again, the Nationals were three outs away from completing a sweep because the Phillies decided they'd take their chances with the best player in the National League.

Bryce Harper hit a two-out home run off Jeanmar Gomez to break a 1-1 tie in the top of the 10th inning.

Bryce Harper, who hit 42 home runs last season, 20 more than he had in any previous season, was given the opportunity to beat the Phillies.  Bryce Harper, who, following his go-ahead home run on the 10th inning of Sunday, left Philadelphia early Sunday evening having homered in four straight games.

Bryce Harper, who has homered in six straight games in Philadelphia dating back to last season, tying a record set by Hall of Famer Ernie Banks in 1955.

So why the heck were the Phillies pitching to him at all weekend, particularly with the game on the line late in Sunday’s game?

“Well when you’ve got a guy hitting .450 behind him, it’s tough,” Mackanin said. “It’s tough to put him on base when you’ve got Murphy, who is a real tough out, he grinds out at-bats and he’s hard to pitch to, you can’t make mistakes to him.”

Perhaps Mackanin has a point (although, given the choice between Harper and Murphy, it’s difficult to choose pitching to Harper). While Harper has gone home run-crazy, Murphy has multiple hits in six of 11 games this season and is hitting .467 (14-for-30) with two doubles and two triples during his current nine-game hitting streak.

•    Carlos Ruiz provided the Phillies only offense before the 10th inning. Ruiz slugged a one-out, solo home run in the second inning to give the Phils a 1-0 lead. The home run was the second of the season for Ruiz, coming in his 21st plate appearance of the season.

Last season, Ruiz had a career-low two home runs in 86 games (320 plate appearances). Ruiz, who had shoulder pain throughout the 2015 season, has hit 15 home runs in 294 games in the last four seasons after hitting a career-high 16 in 2012, when he represented the Phillies at the All-Star Game.

•   After a forgettable Phillies debut, Charlie Morton left Sunday's game with his second consecutive quality start to put his team in position to win on Sunday.

Morton faced the minimum 15 batters through his first five innings, thanks to both his ability to mix his pitches (mostly fastball-curveball, with an almost 15-MPH separation on the two) and solid work from his defense (two double plays and an outfield assist from center fielder Odubel Herrera).

Morton held Washington to one run on four hits in six innings while striking out six and walking one. He has allowed one run on seven hits in his last two starts after giving up six in 3 2/3 innings in Cincinnati on April 7.

•    You want to feel old? Mike Schmidt's historic four-home run game at Wrigley Field occurred exactly 40 years ago, on April 17, 1976 at Wrigley Field. Schmidt's fourth and final home run in the 11th inning won an 18-16 game for the Phillies over the Cubs. The Phils once trailed by 11 runs in the game.

Schmidt was in the Phillies broadcast booth at Citizens Bank Park on Sunday as a part of his role as a color commentator on home weekend games.

•    Before the Phillies and Nationals took the field for the last time this weekend, the Phillie Phanatic celebrated his birthday at Citizens Bank Park. (Did you ever notice the Phanatic’s birthday always falls on Sunday?).

All fans 14-and-under received a Phanatic “flair hair visor.” I am not 14, but they did give me one. No, you cannot have it.

The Phillie Phanatic first arrived in Philadelphia on April 25, 1978. But, according to his spokesman, the Phanatic's actual birthdate is unknown since his birth records never arrived from the Galapagos Islands.