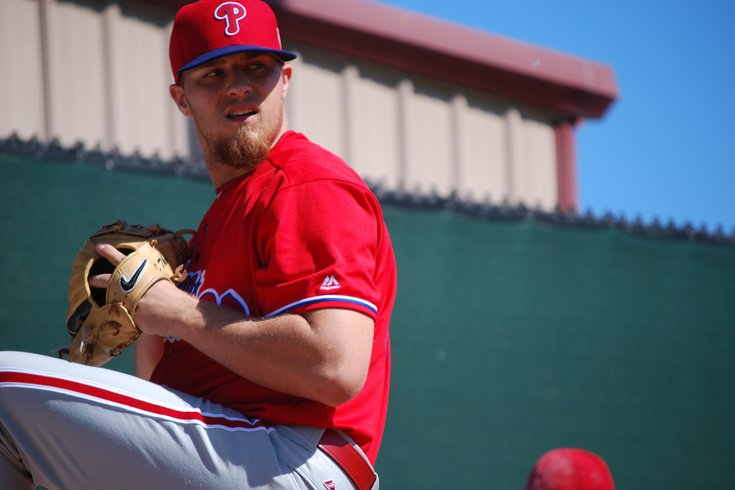 It’s difficult to fathom there is a minor league pitcher in any league at any level that’s had as much success as Jake Thompson in the last two months.

Acquired from the Texas Rangers as a part of a package of prospects for World Series MVP Cole Hamels a year and four days ago, the 22-year-old Thompson has gone 8-0 with a 1.21 ERA in 11 starts since June 5. He’s allowed only two home runs in those games, a span of 74 1/3 innings, and has held opponents to a .202 batting average.

Thompson will no longer be able to dominate hitters in the International League, though. He is headed to the big leagues for the first time.

“I know he’s got Major League stuff and I’m anxious to see him perform,” Mackanin said following the Phillies 3-2 defeat to the San Francisco Giants on Thursday. “We’ll find out Saturday.”

Thompson replaces Aaron Nola in the Phillies rotation; Nola could be sidelined for the remainder of the 2016 season with an elbow strain.

Thompson would have received the call to replace Nola a day earlier, but he had just pitched for the Triple-A Lehigh Valley IronPigs on Sunday. When he takes the mound on Saturday in San Diego, Thompson will have had five days of rest.

And he’ll give the rest of the young arms in the rotation a little breather, too: Jerad Eickhoff, Zach Eflin, and Vince Velasquez, who were originally in line for Saturday and Sunday in San Diego and Monday in Los Angeles, will get an extra day of rest with Thompson’s arrival, pitching Sunday through Tuesday instead.

Thompson was the heavy favorite to be called up to make his major league debut had the Phillies found a deal for veteran Jeremy Hellickson prior to Monday’s trade deadline. But those swirling rumors didn’t affect Thompson, who had an eye-popping 0.27 ERA in five starts from June 26 to July 20.

“If I take my focus away from my pitching and think about what could or couldn’t happen I don’t think my performance would be there,” Thompson said last week in Allentown. “So I’m just trying to stay on track.”

The Phillies appeared to have a golden opportunity to celebrate their second walk-off win in a 24-hour span when leadoff hitter Cesar Hernandez reached base with two outs in the bottom of the ninth inning and the team’s hottest hitter, Aaron Altherr, coming to bat.

But Hernandez, in an effort to get into scoring position for Altherr, was caught stealing when he slid over the bag at second base.

WHY ARE YOU SO BAD pic.twitter.com/9nUsUH9VmZ

It was the seventh time this season (in 17 attempts) that Hernandez has been caught stealing. Only two players in baseball with 10 or fewer stolen bases have been caught as often: Houston’s George Springer (7-for-15 in stolen base attempts) and San Diego’s Alexei Ramirez (6-for-13).

“We were disappointed in that,” Mackanin said. “He stole that base easily and slid past the bag and we’ve addressed that at length with him because he has a tendency to do that. We’ve talked to him about it and worked on it. Unfortunately it came at a bad time, the winning run on base in the ninth inning. Disappointing, but we’re going to continue to work with him.”

Hernandez’s speed is easily his best tool, but his instincts are reminiscent of a young Shane Victorino.

Ironically, the player at the plate when Hernandez was caught stealing on Thursday afternoon, Altherr, is a perfect 3-for-3 in stolen base attempts since being activated from the disabled list a week ago.