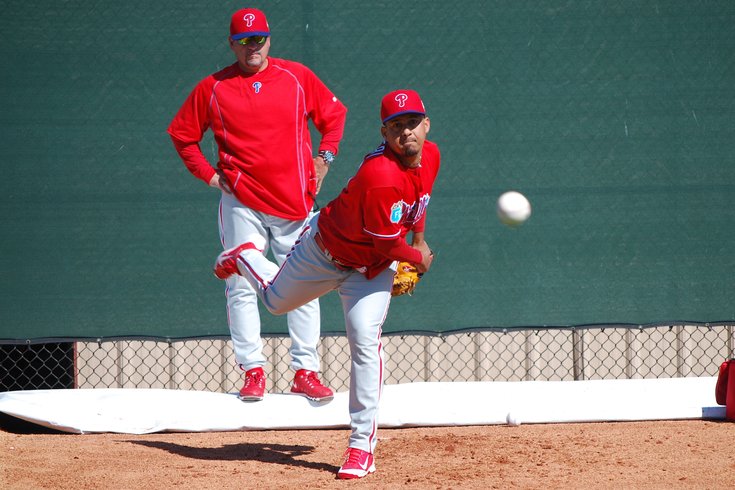 CLEARWATER, Fla. – The race for the top spot in the Phillies bullpen could be the most intriguing of any spring battles in Clearwater – at least if you listen to Pete Mackanin.

The first-year manager has said more than once in the first few days of camp that there was no obvious favorite.

David Hernandez may have been the team’s only major league free agent this offseason, and on the roster at a guaranteed $3.9 million, but he’s not guaranteed the closer’s job. Mackanin would only offer that Hernandez’s place on the payroll may give him an edge.

Other than that, with names like righthanders Andrew Bailey (89 career saves), Ernesto Frieri (73), Edward Mujica (50) and lefthander James Russell (4) as newcomers in camp (on minor league contracts) and hard-throwing Luis Garcia among last year’s holdovers, it would appear to be a wide-open competition where Grapefruit League results matter.

To some degree, at least.

“I think it might come close to that,” Mackanin said after pitchers and catchers worked out on Sunday at the Carpenter Complex in Clearwater, Fla. “Putting everything together – his history, how he's pitching here. We certainly won’t base everything on how he's pitching here. We’ve seen guys have great springs – I always hit great in spring, I’d hit four or five home runs, tear it up and I was a lifetime .226 hitter. So I’m smart enough not to go by that.”

Mackanin hasn’t got a great look at Hernandez in three days of camp. He said he remembers watching Frieri once while working as a scout for the New York Yankees a few years ago, but that’s about it. Everyone else is new to him.

“On one hand it’s almost a bonus not having seen a lot of these guys – It’s almost like I’m getting a first impression from these guys, a clean look,” Mackanin said. “We’re going to evaluate everybody and see how they play. If they don’t play well, we’re going to try to keep the guy that’s better.”

Of course, some candidate may be eliminated with simple, heart-to-heart talks with the manager.

“We have talked to a potential, half dozen closers for us, and without naming names, one guy said he’d probably be more comfortable as a seventh or eighth inning guy,” Mackanin said. “So that tells you right there that that might eliminate him. But that’s part of how it works. Some guys want to be in that high-leverage situation, they thrive on it. You’ve seen enough closers - they are all a little funny, (but they) to have that attitude to get through those outs.”

Shortstop of the futu ... now?

As sampling of some of the stuff you hear the first week of camp, here’s an actual back-and-forth between Mackanin and a media member Sunday.

Would you like to see J.P. Crawford start in Triple-A and get a little more experience there or does he have a shot, a legitimate shot to win the starting shortstop job here in camp?

“Well not for me,” Mackanin said. “Freddy Galvis is my shortstop and I feel like he deserves that chance. Don’t get me wrong, I’m real high on J.P. Crawford. I haven’t seen him a lot but I know he’s highly touted. I want to concertante on our big league guys.”

So another year in Triple-A you’d like to see, at least?

“It’s not that I’d like to see it, but I think it’s going to have to play its course," Mackanin said. "You know. If he’s hitting .360 in June (and) we have an opportunity to play him, then, of course, he’s going to be moved up.”

Quick reminder: J.P. Crawford has yet to play in Triple-A and began last season at Class A Clearwater. He is 41 days removed from his 21st birthday.

Ryan Howard (who briefly checked into camp Saturday) and Darin Ruf figure to get the majority of time at first base in 2016. But last year’s Opening Day third baseman, Cody Asche, has been working out in the last few days at first base, too.

This winter, Asche moved down the depth chart when the Phillies added defensive wiz Peter Bourjos to what they hope is an athletic outfield with Odubel Herrera and Aaron Altherr. Asche, who moved from third base to left field six weeks into the 2015 season, has struggled to find consistency on offense.

By increasing his versatility on defense – playing first base – Asche could gain more at-bats this spring and beyond in an effort to establish himself as a hitter who deserves another look in the regular lineup.

“He’s got potential and we need him to get close to that potential,” Mackanin said. “The challenge for me is to get into so many games as I can. It depends on how everyone else does. One again we’re all competing for jobs and he’s going to have to compete as well. The days of being a top prospect have come to the point where you have to produce o we have to move on. Now I’m betting on Cody to be successful. So, we’re just going to wait and see. I have to get him into games.”

(Note: Asche will not see any action at second base, where he played in 2011 at short-season Williamsport.)

Position players are required to be in big league camp on Monday, with the first full-squad workout of the spring coming Tuesday. The Phillies will play their first exhibition game on Sunday against the University of Tampa at Bright House Field.

Righthander David Buchanan took a comebacker to his right triceps while throwing to hitters in a live batting practice on Sunday.

But since he kept pitching, Buchanan appeared to be unaffected and OK to continue progressing with the rest of the pitchers in camp.

"I don't think it's a big deal," Mackanin said.