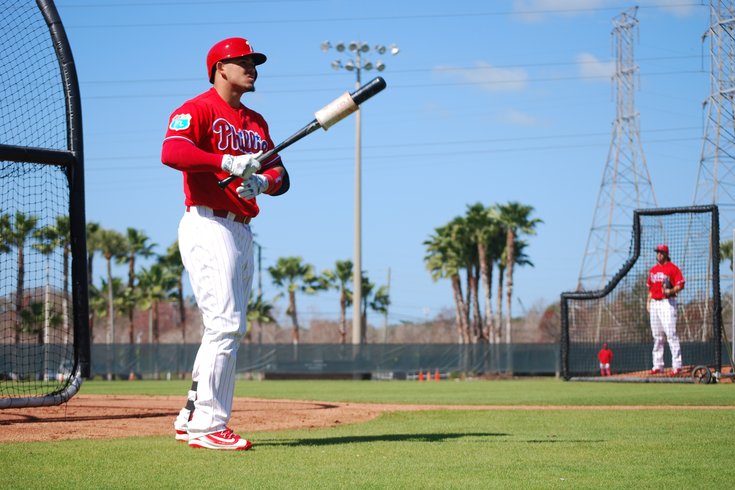 Jorge Alfaro, the headline piece of the Cole Hamels trade, arrived in the big leagues on Friday, temporarily replacing Carlos Ruiz on the Phillies active roster.

On the first day of camp, new catching coach John McLaren summoned a group of seven catchers just outside the coach’s box along the third base line and made an example out of one.

He motioned toward Carlos Ruiz, the longest-tenured Phillies player in camp (before Ryan Howard checked in Saturday afternoon). McLaren told the many youngsters within the small catching circle to follow the veteran’s lead, to watch him at work, to use him as a resource this spring in Clearwater.

Jorge Alfaro, 15 years Ruiz’s junior, heard his coach’s message on Thursday and ran with it.

On Friday morning, he was positioned in between Ruiz and fellow veteran catcher Cameron Rupp during the firing squad of simultaneous bullpen sessions (six pitchers pitching at the same time and in close proximity) and kept up a dialogue with both throughout. In the afternoon, after catching a quick drink at his locker stall, Alfaro walked across the clubhouse and pulled a chair next to Ruiz’s and started up another conversation with the former All-Star catcher.

“Jorge strikes me as a sharp enough kid that hopefully he is asking a lot of questions and trying to get as much information from Chooch as he can,” Phillies player development director Joe Jordan said Saturday morning. “I’m certain he is.”

Ruiz, a converted infielder from Panama, remembers being in a similar situation more than a decade ago. He was still developing his craft and trying to get acclimated in a new environment when he called on Mike Lieberthal and Rod Barajas for regular advice. 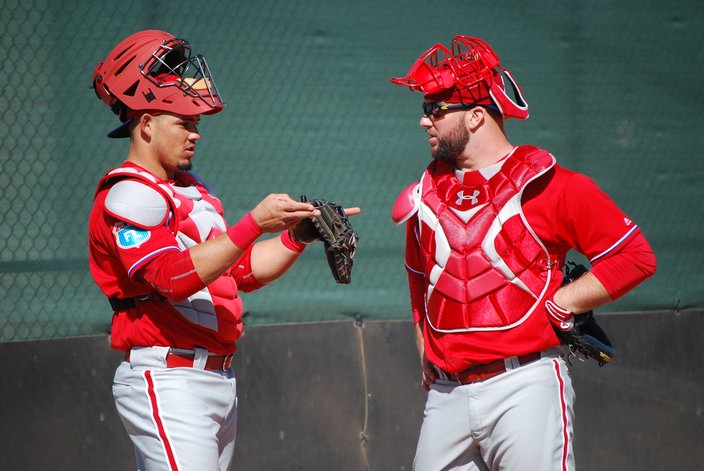 “He’s a nice person, he’s a good kid that I see wants to learn,” said Ruiz, who met Alfaro when both arrived to Clearwater about a month ago. “He’s not afraid to ask me questions. I told him that whatever you need, just ask me and I’ll give you whatever information I can.”

Alfaro, a powerfully-built, 22-year-old from Colombia, arrived into the Phillies organization in the blockbuster trade that sent Cole Hamels to the Texas Rangers last July.

But unlike the other prospects in that trade – Nick Williams, Jake Thompson, Jerad Eickhoff and Alec Asher – Alfaro didn’t have the opportunity to jump right in and show off his personality and talents to new teammates in Double-A Reading, Triple-A Lehigh Valley or Philadelphia. He was a little more than a month removed from season-ending surgery on his left ankle.

Alfaro managed to jump into three games in the Gulf Coast League before the Phillies 2015 season ended, but was more than a little rusty when he played in 13 games in the Venezuelan Winter League this offseason (where he hit .262 with a home run and a double).

“I feel 100 percent right now,” Alfaro said. “When I started playing (in Venezuela) I felt a little bit lost. After a week I felt better, I was doing better, the catching was there. The hitting part, it was like being a little bit lost.”

But the talent that made him a top 3 prospect in the Texas Rangers heavily-stocked farm system in each of the previous two years is also easy to see.

“I can tell he has real good power (from watching batting practice),” Ruiz said. “That’s fun to watch.”

Like fleet-footed Phillies shortstop-turned-center field prospect Roman Quinn, Alfaro’s progress as a rising prospect was stunted last summer by injury. The 2015 season can pretty much be checked off as a lost year of development.

Because of that, it’s difficult to project exactly where Alfaro is in the development process.

“We need to see him play,” said Jordan, who hasn’t seen Alfaro in person in game action since the power-hitting catcher was with Low-A Hickory in the Sally League in 2013. “And so from where he’s at developmentally, we’ll see. He’s a very impressive young guy when you watch him work out, when you interact with him and speak with him. Here very soon, we’re going to have the chance to see him play in games and see him react to different pitches. So, developmentally, where he’s at, I’ll have a better feel for it in a couple-three weeks.”

Among the aforementioned prospects acquired in the Hamels’ trade, Alfaro arguably has the highest ceiling. Following the deal, one scout said the catcher had a “90 arm” on the 20-80 scouting scale, and many believe his power tool could be in the 70-80 range, too.

But among the same group of players he came over from Texas with - and, really, in the current Clearwater clubhouse dotted with rising young minor leaguers – Alfaro also might be the rawest of prospects. In his last full season, in 2014, Alfaro hit .261 with a .787 OPS, 17 home runs and 26 doubles in 121 games between Class A Myrtle Beach and Double-A Frisco. 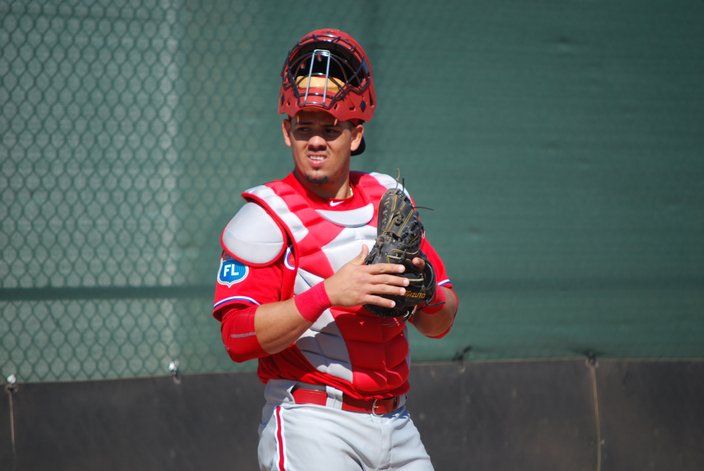 But he also had nearly 100 more strikeouts (123) than he had walks (29). The righthanded-hitting Alfaro has racked up 492 strikeouts while walking 95 times in 453 games since signing as a 17-year-old.


Although his bat was admittedly rusty following a lengthy layoff recovering from ankle surgery, Alfaro struck out 16 times and didn’t draw a walk in 13 games in the Venezuelan Winter League.

“Obviously we can all tell that there is going to have to be some adjustments,” Jordan said. “And usually that’s what the upper level of the minor leagues makes you do.”

Many people in the industry had similar concerns about Williams this time a year ago, viewing him as a toolsy-but-unpolished athlete who needed to improve his discipline as a hitter. Williams struck out 140 times in 112 games in 2014.

Williams, also 22, improved on that front in 2015, cutting his strikeouts down to 97 in 119 games while not losing any power in the process (17 home runs, four more than he hit in the previous season).

“I think that’s a great comparison,” Jordan said. “Nick seemed to make the adjustments that it looked like he needed to make. So hopefully, Jorge can do the same thing.”

Jordan has had conversations with his own scouts and even people from the Rangers organization that he'll use to "develop a plan for improvement." Alfaro, meanwhile, is also aware of his developing bat and focused on finding the proverbial holy grail hitters at every level hope to locate: consistency.

With health, Alfaro will have the opportunity to improve as a hitter this spring and summer. Eventually, he’ll compete with Andrew Knapp for the title of Phillies catcher of the future (having two talented young catchers is never a problem, really).

But that’s a conversation for later in 2016. In the first week of spring training - and when the major and minor league seasons open in April, too - it’s probably important to remember that Alfaro is an unfinished product.

It will surely be a treat for fans to watch his talent develop this year, likely beginning at Double-A Reading. But as camp is getting underway in Clearwater, Alfaro is simply happy to be in an organization where he sees real opportunity and a chance to learn a lot, too.

“It’s exciting for me,” Alfaro said before walking over for another tutoring session with Ruiz. “I feel really good about it because I know I can learn a lot from him. He’s a very good person, outside and inside the field. And he’s just a really nice guy – he’s always talking to me about catching, about life, and people, too. I like the way he teaches.”