Eickhoff has fractured thumb, vows he'll be ready for season 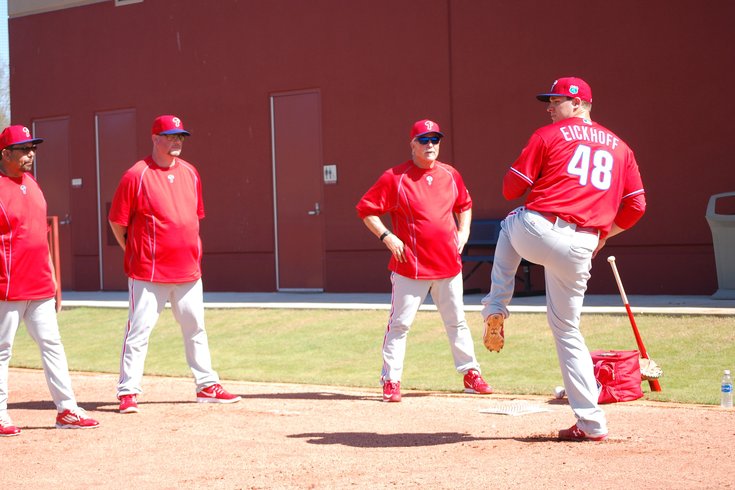 All eyes are on Jerad Eickhoff during a light workout Friday in Clearwater.

Jerad Eickhoff, one of four pitchers projected to be in the Phillies new-look rotation, is behind at the start of camp in Clearwater after suffering a small fracture to his right thumb.

The 25-year-old Eickhoff suffered the injury during a bunting drill in unofficial workouts last week before camp opened. He does not think it will affect his ability to be ready when camp breaks on March 30.

“He shouldn’t be far behind, it’s going to set him back a little, but not much,” manager Pete Mackanin said. “We expect him to be fine.”

Eickhoff said his “tentative” plan is to throw off a mound for the first time within the next week. Most of his teammates have thrown at least one bullpen session during the first two days of camp this week.

Eickhoff has been playing catch to keep his right arm moving while also going thrown other, lighter drills.

“It’s basically treated like a bruise, the way it’s treated, nothing serious,” Eickhoff said. “But it’s up to me when I can put that pressure on it, start trusting it again going full speed.”

He said the injury happened last Thursday, about a week and a half after he checked into Clearwater during his first season in Phillies camp.

“We were bunting and hitting for a good week and a half … and I took a hard ball, it was off the machine, up and in,” Eickhoff said. “I tried to kind of get out of the way of it, but at the same time my thumb came off the bat and it grazed my thumb. It kind bruised it pretty good, knocked it back. So I’ve just been kind of easing back into it I guess you could say. Just trying to get the soreness and everything out of there.”

An X-ray revealed a “slight, small fracture on the outside” of his thumb, something that’s “nothing serious,” Eickhoff said.

Eickhoff was a part of the prospect package the Phillies received from the Texas Rangers in the Cole Hamels' trade. He impressed in his short stint with the Phils at the end of last season, going 3-3 with a 2.65 ERA in eight starts.