What should the Phillies do to solve their outfield problem? 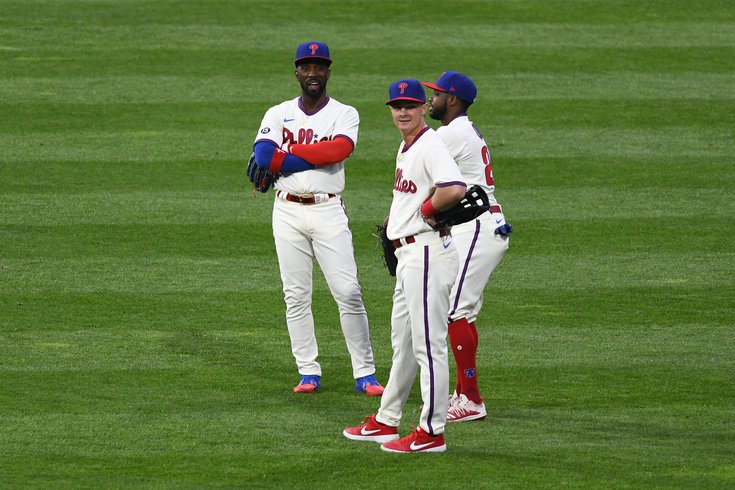 If Bryce Harper could play all three outfield positions the Phillies wouldn't have an outfield problem.

But the laws of physics insist that he is just one man. And so the Phillies are two serviceable starting outfielders short.

With Harper running out to right field every day and posting MVP-type numbers, he got almost no support up and down the lineup and aside from shortstop — a position in dire need of improvement as we looked at last week — there is probably no offensive slot that sinned more than the outfield did, both in center and in left.

With the competitive windows narrowing as Harper, J.T. Realmuto and Zack Wheeler continue to waste their prime years, getting older and playing on contracts that are not cheap, the time is now for the Phillies to find a way to surround their in-their-prime core with pieces that can create a winner.

The Phillies reached a milestone this season in finishing above .500 for the first time in a decade. But their 82-80 finish did not get them in the playoffs, and at very few points during the 2021 season did they look like a true World Series contender.

How can they make the leap into competitiveness next season? Fielding three everyday outfielders who are a strength for the team would be a wise strategy.

So the biggest reason we are having this discussion is because the Phillies have been absolutely awful at drafting in the first round (and really in every round) over the last half decade. Three years in a row, they took an outfielder with very high picks, passing over a bevy of other productive prospects. All three are looking like busts.

That's three top 10 picks, less than one full season of MLB production among them and really no reason to be optimistic right now about any of them, as they each reach their mid-20s.

Had the Phillies landed one of those three guys as a starting caliber major leaguer, they wouldn't be desperately needing Band-Aids there every year. But they do.

It bears mentioning that the Phillies do have a few high quality outfielders in the minors under the age of 22, including Jhailyn Ortiz, Ethan Wilson and Simon Muzziotti, but those hitters have combined to play in just eight Triple-A games and none seems imminently destined for the majors.

Which leads us to left fielder Andrew McCutchen, who has been a clubhouse leader and has provided some pop (he had 27 homers and 80 RBI, but hit just .222) to be sure, but also has a $15 million team option that is likely to be declined heading into next year. The Phillies will probably have two vacancies alongside Harper in 2022.

Centerfield is the other opening, and it's been a total mess since Odubel Herrera — who'll probably still be with the team in 2022 — relented his everyday job due to a domestic violence suspension in the spring of 2019.

Here's a look at everyone who has started a game in center for the Phillies since then:

That's 13 different centerfielders starting a game over the course of two and a half seasons. Some were crappy fill-ins, and some were stars moved to centerfield due to a lack of outfield depth.

The Phillies, heading into 2022, have a handful of players who can play center and left field under contract. Assuming they elect to spend the $15 million they'd otherwise spend on McCutchen elsewhere, their options in the OF include Moniak, Haseley, Quinn, Herrera (who is owed another $24 million over the next two seasons but can be bought out — a likely scenario for him), Jankowski, Verling and Williams. This in addition to the three top outfield prospects we mentioned.

They could decide to trot Quinn and Herrera out there every day, but their current crop of options are certainly less than desirable. They could also shuffle positions a bit, moving Alec Bohm to first and Rhys Hoskins out to left field — sacrificing a bit of defense out there but definitely improving their offense. That would, of course, leave an opening at third base (but Kris Bryant will be a free agent, so...).

With a little cash to spend as around $60 million is coming off the books, it seems likely they'll do something to boost their potential to be better in the outfield.

Bring in a free agent

The free agent pool for outfielders is less star-studded than that for shortstop, to be sure. There are a lot of older veterans available who are likely to decline and command more money than they're worth. We won't waste much time here as none of them are overly exciting but we will list the most noteworthy:

There also could be a few more free agents out there based on player and team options. These are the much more interesting players. Charlie Blackmon, Kyle Schwarber, Nick Castellanos and Jackie Bradley Jr. are among those who have the option to go to a new team in 2022. If any of those guys hit the open market, they'll at least draw a tire kick from Philly.

Here's perhaps the most interesting avenue for the Phillies. With a trio of everyday players in Hoskins, Didi Gregorius and Jean Segura each on expiring deals after 2022, the team could search for a player-for-player deal, or dump some salary for prospects to open up some cash to trade for an outfielder.

There could be some players to be had this offseason from teams that may not intend to bring them back on expiring deals. And with the Phillies pushing to win now, they are reasonable options. Just to name a few:

Dave Dombrowski will be wheeling and dealing this offseason as he knows the clock is ticking. There is only so much you can accomplish with Herrera, Quinn and Haseley splitting time in centerfield. An upgrade has to be in the cards, and the Phillies will be looking to get creative when they seek to find one.