What should the Phillies do at shortstop? 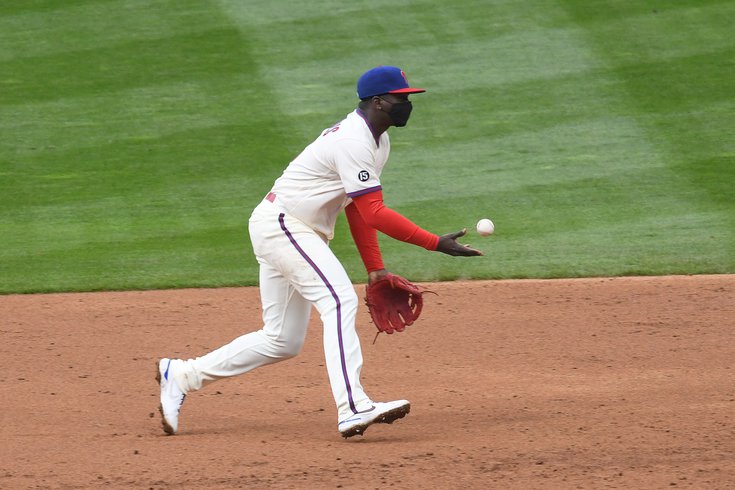 The Phillies reached a milestone this season in finishing above .500 for the first time in a decade. But their 82-80 finish did not get them in the playoffs, and at very few points during the 2021 season did they look like a true World Series contender.

With Bryce Harper, J.T. Realmuto and Zack Wheeler all quickly getting older and playing on contracts that are not cheap, the time is now for the Phillies to find a way to surround their in-their-prime core with pieces that can create a winner.

One of the biggest weaknesses this year was at shortstop. In the coming weeks, we'll ponder how they can fix their other issues this offseason like the outfield, bullpen and back of the rotation.

But let's start up the middle at SS.

The Phillies statistically had the worst shortstop production in the entire National League, and the second worst in major league baseball as their shortstops combined for a -2.6 WAR (via baseball-reference).

No matter who Joe Girardi trotted out to play short, with the bat he held the Phillies back. And that's just on offense. The Phillies shortstop spot on defense committed 27 errors, the second most in the majors in 2021, and slotted in the bottom three in nearly every fielding metric there is.

Had this position alone been a strength and not a liability, the Phillies may have been able to catch the Braves, or hold onto one of their multiple stints in first place in the NL East. It's clear an upgrade at short is in the cards for 2021.

How do we know there will be a shake up at shortstop in 2022? Well, the President of Baseball Operations himself said so, when Dave Dombrowski addressed media members after the Phillies season concluded last week.

When asked if Didi Gregorius, who is due $14 million next season, would return as the starting shortstop, Dombrowski surprised some when he answered bluntly.

"It very well could be him," Dombrowski said. "But he knows, we've had a discussion with him, that he needs to be better. We're in a position where we also are going to be open-minded to what's going to take place at shortstop next year. It could be internal. It could be him if he comes back.

"I think for me with Didi, early in the year, he was a little bit late coming in. It was not a good offensive year. He's always been an offensive shortstop. But the one thing from a defensive perspective that he's always done in his career is catch the routine play. He hasn't always had the greatest range. But he just didn't do that this year on a consistent basis. Now, he was hurt some. I know the arm bothered him some. He had some injury factors.

"Maybe it is him. And he will come in shape. We'll just see how he does at that point, but he's not guaranteed that he's been told that he's for sure the shortstop. It doesn't meant that he can't play other positions for us, too. And maybe we'll have a DH that'll be part of our club too next year."

That's a long quote, but basically Dombrowski said the Phillies plans to keep their options open. And they should.

If Gregorius doesn't show up to Clearwater in the best shape of his life (at age 31), or he doesn't earn the spot in spring training, there are some really appealing alternative options.

The second of these falls in the category of in-house too, in shortstop prospect Bryson Stott, who had a breakout year in 2021 hitting .299/.390/.486 across three levels of the minors last season including Triple-A. He is getting very close to being big-league ready, and if the Phillies elect to spend money on other positions, it's possible he could beat out Gregorius for the starting role — or relegate Gregorius to the DH should the NL adopt one for 2022.

We're going to get into some other options at shortstop in a second, but Stott panning out — a former first round pick who is 24-years-old — would be the optimal scenario. Signing someone longterm could obviously block him from playing every day in the field which is definitely a consideration.

In 2022 the Phillies are slotted to have around $136 million tied up in 17 players. This does not include arbitration-eligible players who will probably eat up another $20 or so million in total. Which means the Phillies — if they want to stay below the luxury tax — will have somewhere in the neighborhood of $60 million to spend on free agents for the bullpen, to round out the rotation, to fill the bench and to play in the outfield alongside Harper.

So if the Phillies decide they really want to go for it and make a splash in 2022, there are some incredibly appealing free agents who play shortstop they might consider. And with the DH spot potentially coming they'll need another bat every day regardless of Stott's progression. Here's a brief look at the biggest ticket items in what is a historically rich class:

He's the one of the biggest three shortstop prizes of free agency, in his prime and coming off an All-Star year with the Astros where he hit .277 with 26 homers, 92 RBI and over 100 runs scored while playing soundly in the field. Spotrac.com projects he'll command somewhere north of $26 million per year. Would the Phils be willing to commit that much money to another player?

Story is every bit as good as Correa and will be even more pricy, making potentially in the $30 million per year range. Over six MLB seasons, he has averaged 36 dingers and 98 homers per year and also has 100 career stolen bases. Will Dombrowski more than kick the tires here?

Can you believe we haven't even gotten to the best of the bunch? Seager, who is playing out his contract for the Dodgers as they seek a world title, is nearly a career .300 hitter (.297) but he is injury prone and doesn't have as much power or speed as Story or Correa. He also strikes out a lot. Could his flaws get his salary demands a bit lower?

Baez had a down year with the Mets after a mid-season trade in 2021, and he led the league in strikeouts. He is a dynamic slugger who has also led the league before in RBI and has hit for 29 homers or more three times. His Gold Glove would really help the Phillies defense. Will New York let him walk after acquiring him as a rental?

We've left the realm of the great bats, with Semien less than consistent at the plate but elite on the dirt instead. However, he is coming off an incredible 2021 that saw him hit 45 homers and 102 RBI and make his first All-Star game with the Blue Jays. Would he accept a short-term deal at age 31?

Simmons has four Gold Gloves, but has less power and is inconsistent with the bat just like Semien. He's the cheapest of the options and could be a big lift to the defense every day. Semien or Simmons would make sense as short term fixes if the team feels like Stott isn't ready for the everyday role.

The last avenue for bringing in a shortstop would be via trade — or waiting for the latter half of free agency to bring in someone affordable. The trade market will emerge this offseason but the Phillies farm system doesn't offer much to entice potential partners, and the team certainly doesn't want to tap its limited resources.

A player-for-player could work, and Rhys Hoskins comes to mind as someone they could move to open up first base for Alec Bohm, whose defense at third cost him his everyday job in 2021. The team could also try and move Gregorius somehow, or perhaps Bohm himself.

As far as cheaper options on the open market go, a handful of names like Freddy Galvis and Jose Iglesias are out there but there is a pretty big drop-off after the guys we examined above.

Will it be a crazy offseason with rumor stories every single day, like the Bryce Harper/Manny Machado winter? In all likelihood not. But Dombrowski isn't shy when it comes to making big moves. And he knows the clock is ticking on this expensive and talented team to show it was worth the investment. Shortstop is just the first of many important priorities for the team this offseason but it could be the one that sets the tone for how they address the rest of their needs.