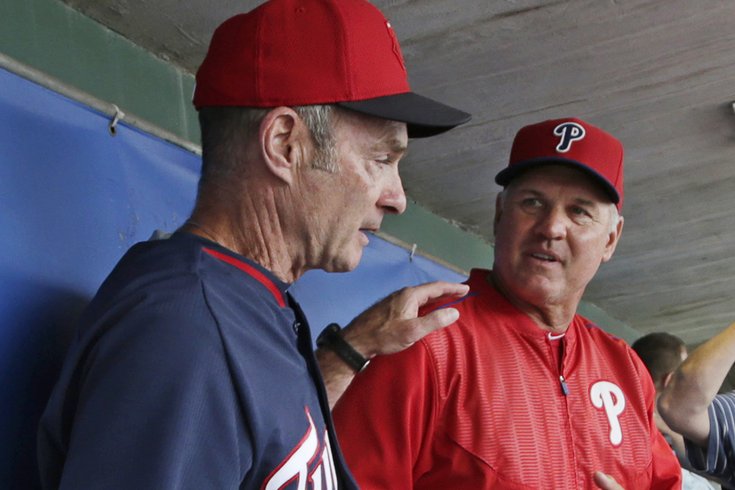 Minnesota A pair of Hall of Famers -- Twins manager Paul Molitor, left, and Phillies manager Ryne Sandberg -- chat in the dugout before their teams squared off Monday.

CLEARWATER, Fla. — Paul Molitor and Ryne Sandberg crossed paths a lot over the years — in spring training, at All-Star Games, up in Cooperstown.

When they met in front of the mound Monday to simultaneously toss out ceremonial first pitches, the longtime pals made history.

It was believed to be the first time already elected Hall of Famers had managed against each other in a big league game. Sandberg and the Philadelphia Phillies won this matchup, beating Molitor and the Minnesota Twins 3-0.

"The fact that it's never happened before is kind of an interesting little piece of trivia, but for me, it's more about managing against a friend," Molitor had said, sitting next to Sandberg in the dugout.

This is the only exhibition game this year between the Phillies and Twins, and they don't meet in the regular season. So for 2 1-2 hours at Bright House Field, the former stars enjoyed the moment — Molitor perched on the top step of the bench, Sandberg sitting on a chair outside the dugout, near another fellow Hall of Famer, Phillies guest instructor Mike Schmidt.

Molitor and Sandberg exchanged lineup cards at home plate, then the first pitch of the game was thrown out of play. Both managers signed the ball, and Hall of Fame President Jeff Idelson collected the souvenir in person, ready to take it back to Cooperstown, New York.

"I looked over at him at the start. We kind of kept it ongoing throughout the game," Molitor said.

Especially when it came time for Molitor to practice his double switches, something he won't do much in the American League. Or in this case, a quadruple switch.

In the fifth inning, Molitor changed pitchers and shifted three other fielders. He'd joked with Sandberg about giving the strategy a whirl, and on the way out of the dugout called over to him: "Here we go."

"I just checked him out for the double switch. We talked about that a little bit," Sandberg said.

"We talked about the double switch at home plate. That was one thing he was thinking about doing. He told the umpire he was going to practice and go up to them first. And I told him that's the biggest thing, go to the umpire first and then you're kind of home free. You can kind of discuss it and get it right," he said.

The 58-year-old Molitor is in his first full season with the Twins, and the 55-year-old Sandberg is starting his second full year in the dugout. Elected to the Hall a year apart, they both oversee teams coming off last-place finishes.

Sandberg's wife, daughter-in-law and two grandchildren were at the game. It was a special day, albeit only in spring training.

And even it was just an exhibition game, the loser might pay a price. Exactly what's the tab Molitor owes after Sandberg took a 1-0 lead in head-to-head matchups?

"We'll figure that out," Molitor said.