5 awards from the Phillies' series win over the Dodgers 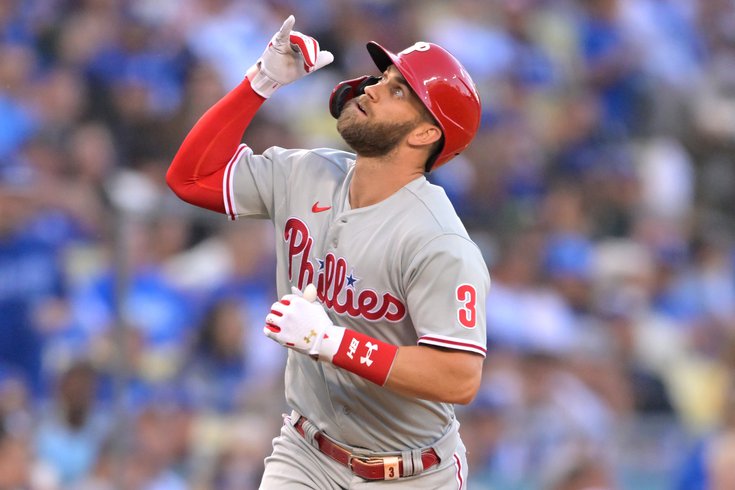 Bryce Harper rounds third base after a solo home run.

Two series wins in a row! Who are these Phillies? It would've been very on-brand for the team to falter ahead of a gauntlet of schedule while being the lone squad playing in Philly right now. The Sixers flamed out in the second round yet again. The Eagles' Week 1 matchup is 118 days away. The Fightins have a chance to grab the attention of Philly sports fans wholly. If they can out-clobber big-time teams like the Dodgers, it could be a way more intriguing summer than I could've envisioned this time a week ago.

The Phils had a four-game set in Los Angeles over the weekend. They took three of four from the Dodgers, scoring 33 total runs across those four games. The bats are awake. Entertaining baseball returns to Philly, no matter how fleeting it may be. As I do, I'll give a quick summary of this series and hand out five awards to the victorious Phillies:

• It was a football score on Thursday night, as the Phillies beat L.A. 9-7 behind two extra-base hits form Bryce Harper.

• The Phillies topped the Dodgers 12-10 in 10 innings on Friday. In the top of the 10th, Nick Castellanos doubled home Roman Quinn and Harper to give the decisive blow.

• A three-hit effort from Harper on Saturday had the Phillies cruising to an 8-3 win.

• One strike away from a four-game sweep on Sunday, reliever Corey Knebel melted down in the bottom of the ninth on Sunday. With two outs, he allowed a triple, a walk and a double that gave L.A. the comeback win.

No player in the National League has more total bases this season than Harper's 83. That UCL injury may prevent Bryce from playing the field, but he's still crushing it at the plate. His nine homers are tied for the NL lead. His slugging percentage of .634 leads everyone in baseball besides that one guy from Millville, New Jersey. That's higher than it was during his MVP campaign in 2021.

He's playing like an MVP once more. Harper got the day off on Sunday, but in the three games he played in L.A., he went 7-for-12, hit four doubles, smacked two homers, scored five runs, drove in eight runs and walked twice. SHEESH. The Phillies haven't a player win back-to-back MVP awards since Michael Jack Schmidt in 1980 and 1981. It's doable for Harper in 2022 if the Phils can find their way to the postseason.

This Dude Should Be an All-Star Award: Jean Segura ⭐

The 2022 MLB All-Star Game is at Dodger Stadium. If this series is any indication, Segura could rake in the Midsummer Classic just as well as he did over the weekend. Segura played in three games this series, going 5-for-13 with three RBI and four runs scored. He's riding a 12-game hitting streak. His .867 OPS is tied for a career high. Segura didn't enter 2022 as hyped up of a player as Harper, Kyle Schwarber, Nick Castellanos and Rhys Hoskins did, but he's just been putting the bat on the ball and it's working out quite well for the Fightins.

Schwarber, along with Harper and a few others, is tied for the National League lead in home runs with nine. He's also hitting .186 with an on-base percentage below .300 despite hitting leadoff frequently this season. If the Phillies somehow find themselves playing meaningful October baseball, Schwarbs will have a playoff series where he either hits .125 with nine strikeouts or he slugs .856 with three homers. There's no in between.

Given his No. 12 jersey, left-handed bat and husky frame, Schwarber has drawn comparisons to 2008 folk hero Matt Stairs. Schwarbs ripped one into the night in his own right in L.A. on Friday, one of his two homers this series:

Alec Bohm had 23 multi-hit games in 115 games played in 2021. He already has 11 in 2022 in just 33 games. Bohm looked to be the first home grown positional player to be a budding star in over a decade when he debuted in 2020. He looked like he didn't belong in the majors in 2021. Now, ahead of his 26th birthday in August, he looks as solid as possible and a worthy addition to a packed Phillies lineup.

Bohm had a hit in every game against the Dodgers, going 6-for-18 overall. Everybody hits right now!

Too bad there's not an angry freezing face emoji.

This is a DFA-worthy strikeout:

Yency Almonte got Odúbel Herrera to swing at a slider between his legs. pic.twitter.com/7VUmB8JyQr

I'm done with this guy. I've been done.

The Dodgers entered their series with the Phillies with the best record in the National League. After dropping three games, they're now tied for first place in the NL West with the Padres. That San Diego squad heads to Citizens Bank Park for a three-game set beginning Tuesday at 6:45 p.m. The Phillies will play L.A. again this upcoming weekend, though that series will come in Philly as well.