Phillies offense is dominating, should make them contenders 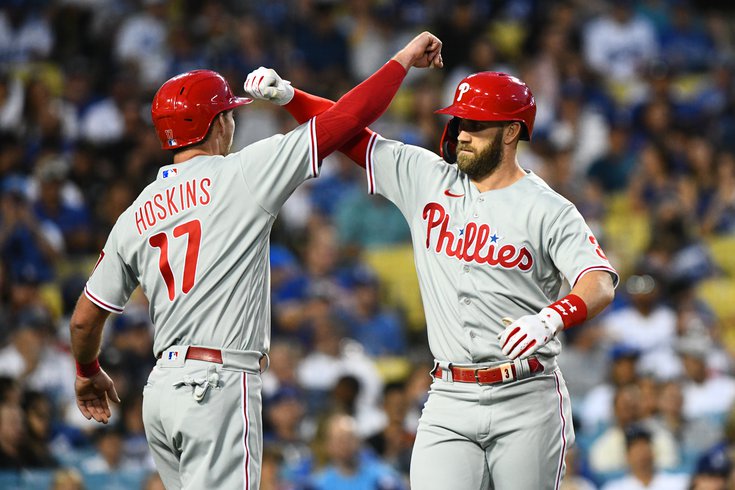 Bryce Harper and Rhys Hoskins have been mashing the ball on the west coast.

When the Phillies front office decided they wanted to take the common sports phrase "the best defense is a good offense" to it's extreme, this is what they had in mind.

Through 35 games this season, the 17-18 Phillies have played the fifth toughest schedule so far in the National League, dueling 23 times with teams currently in the playoff picture and routinely running up against aces like Max Scherzer and Walker Bueheler.

At first glance, the team looks like it is treading water in the standings, and with the Padres, Dodgers, Braves, Mets, Giants Angels and Brewers (geez) all to come next on the schedule, the team may have to continue to do so for the next few weeks as each is a contender right now too.

However a deeper look at the performance of the 2022 Phillies' offense reveals a team that is doing everything right, and quite frankly dominating some of the best pitching in baseball.

Phillies hitters are smoking the ball, as you can tell from some of the statistics above. They hit the ball hard (faster that 95 MPH) an NL best 42.8% of the time and hit line drives 26.4% of the time, another best rate in the league. They also have one of the lowest ground ball rates in the league as well.

It's not just that they are getting lucky when a ball is put into play, they are hitting the ball hard and consistently, two attributes that may be promising if they are continued as the schedule — eventually — gets easier.

On their recent road trip west, Bryce Harper hit .609 over the seven game stand and hit homers in the first three games of the four-game set the team played against the Dodgers, looking just like he did during his final MVP push last fall.

“[Harper] is in a great spot and it’s great to see,” manager Joe Girardi said after Game 3 (via MLB.com). “Obviously he’s so important to our offense, but we have other guys in good spots too, which is really helping out."

The reigning MVP leads the league in runs scored, doubles and home runs. He has the second highest number of RBI and stolen bases in the NL as well. His .634 slugging percentage is 34 points higher than Nolan Arenado, his closest competitor. And no National League hitter has more total bases than Harper's 83.

The Phillies might have the supporting cast this season to help avoid wasting another MVP output from the 29-year-old.

Six of the Phillies regular hitters (if you include Didi Gregorius who is currently on the IL) are hitting .270 or better right now. And that is not including Kyle Schwarber who is tied for the team lead in homers (with Harper) with nine and Rhys Hoskins, who is finally starting to heat up himself. Nor does that include J.T. Realmuto who has a .243 average.

Schwarber and Nick Castellanos are each in the top 15 in RBI, while Alec Bohm and Jean Segura are among the top seven hitters in the NL in batting average (Harper is 9th).

Despite the team's current losing record and the intimidating schedule they're stuck with, the Phillies are playing like contenders and bring with them the excitement this city desperately needs between the Sixers annual second round playoff ousting and Eagles training camp opening at the end of the summer.

The true question Philadelphia fans are wondering is if this team will be relevant by the time the Birds hit the gridiron. If they keep hitting the ball like they have for their first 35 games, it would be hard to fathom they are not.