Phils president Dave Dombrowski is staying patient, confident his team can hit its way out of its current hole 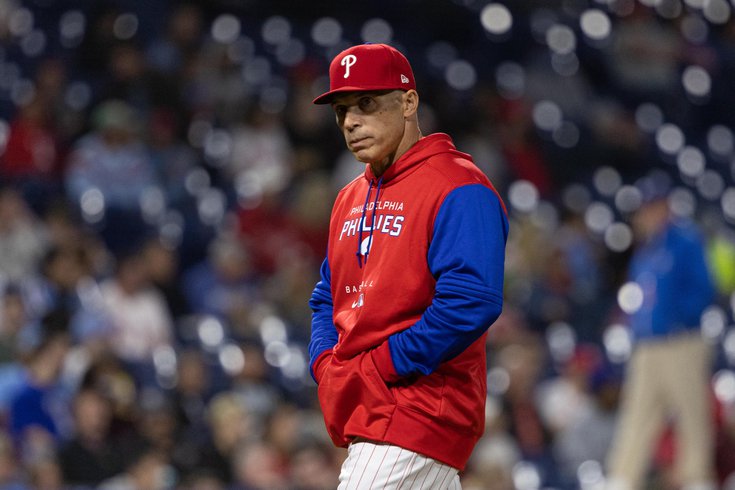 The club hasn't gotten off to the start many imagined — 5-5 in their last 10 games and 11-15 overall, getting no-hit and losing two of three to the Mets last week, swept by the Rangers in a two-game series this week, then blowing a six-run lead to New York in the ninth Thursday night in a complete collapse — but team president Dave Dombrowski isn't sounding any alarms, at least not yet.

The Phillies aren't considering moving on from Girardi right now, per The Philadelphia Inquirer's Scott Lauber, and Dombrowski is staying patient, hoping that the lineup can settle in and hit its way out of the team's early rut.

Said Dombrowski in a phone conversation with Lauber on Friday:

“It’s not Joe’s fault that we’ve been shut out or scored one run seven times. We’re a club that, he’s been in charge as far as handling situations. We’re prepared to play. We go out there on a day-in, day-out basis. We battle. I know Joe’s disappointed with our record. We’re all disappointed.

“We just haven’t played very well overall. I’m not at all pleased with what our record is. It’s been a challenge for us. But I also think we have the capabilities and abilities to play much better and win a bunch of games.

“I think we’re better than this.” [The Inquirer]

His sentiments on the team haven't changed much from the ones he shared with writer Jayson Stark and color analyst Doug Glanville a little more than a week ago on The Athletic Baseball Show. Dombrowski also told the co-hosts that he believed his club to be better than what their record indicates, and at the time, advanced stats showed strong evidence of an imbalance between the Phillies' expected production at the plate and their actual results (i.e. they were getting extremely unlucky).

"We really just haven't produced on a regular basis. Part of it, I'm not sure if they're trying to do too much because of who they are, we've had a hard time driving in runs when we get on base. So really we just need to snap out of this because we're a better hitting club than this, and if not, shame on me for thinking we are. But it's a situation where I think we have too many good hitters." [The Athletic Baseball Show]

Friday's and Saturday's games against the Mets were rained out, giving the Phillies a couple of extra days to clear Thursday night's implosion from their minds.

The Phillies trail the first-place Mets (19-9) by seven games in the NL East, and Girardi, who's in his third season as manager, is trying to guide them to their first postseason since 2011.

But there is pressure.

Girardi, who has an overall record of 121-127 with the club so far, saw his team fall apart down the stretch the past two seasons (largely because of an atrocious bullpen) and did not have the 2023 option in his contract picked up in the spring.