5 awards from the Phillies' series loss to the Rangers 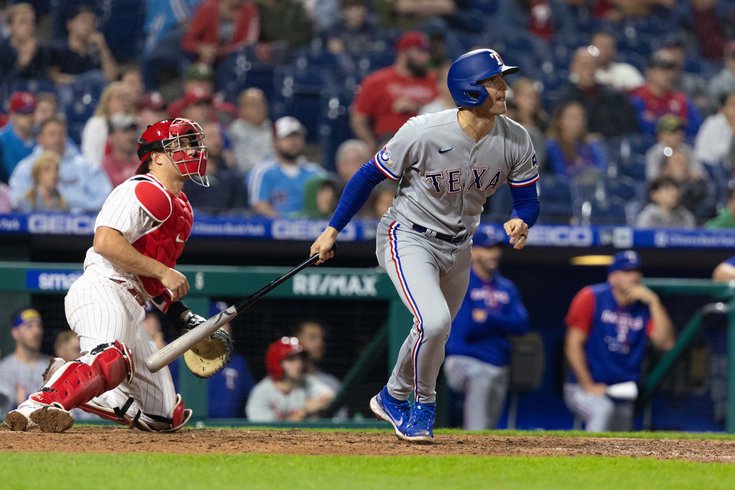 Former Phillie Brad Miller rips a single for the Rangers.

How long ago does last Thursday feel? Two decades? The Eagles had the best haul of any team on Day 1 of the NFL Draft, the Sixers closed out a playoff series in Toronto and the Phillies finished up a four-game sweep of the Rockies.

Well, the Sixers are now down 2-0 and without their best player and, following a rough trip up to I-95 to Queens, the Phillies lost both halves of their two-game series with the Rangers. The Phillies are now three games under .500. Not ideal for the Fightins!

• A gem was wasted from Zach Wheeler on Wednesday, as the Phillies fell 2-1 in 10 innings. All three runs were scored in the 10th inning. Former Phillie Brad Miller won the game for Texas with a 2-run single in the top of the 10th.

Let's kick off the latest round of Phillies awards for this forgettable series...

In my last Phillies series recap, I didn't hand out a series MVP award because the Phils lost the series. I try not to reward mediocrity! I am changing that stance here though because Wheeler's performance on Wednesday night was so encouraging. Wheeler finding that gear could do more to shift the fate of this Phillies season than a random May win.

Wheeler pitched 7.2 innings on a brisk 78 pitches, struck out seven batters, walked just one and, most importantly, allowed zero. runs Now that is the guy who finished as the runner-up in last year's National League Cy Young voting! Offseason injury recovery and a slow start to 2022 understandably had Phillies fans nervous, but this could be a turning point for Wheeler, pitching like the crafty righty that he was in 2021.

These Aren't the Droids You're Looking For Award: Star Wars Night ⭐

May the Fourth be with you!

Listen, if I wasn't working on Wednesday while watching the Sixers and the Phillies, I would've been down at Citizens Bank Park living it up for Star Wars Night. R2D2 roaming around the left field concourse? Boba Fett knit hat giveaway? This was an out-of-this-world (😉) promotion.

It would've been a tougher ask than Luke Skywalker nailing that shot and blowing up the Death Star, but how wild would it have been if the Phils got someone like Pedro Pascal or Ewan McGregor to throw out the first pitch? Anyway, this Phillies' season has been uneven to say the least, but props to the gameday crew at CBP for putting this together.

A two-game sample size makes it a bit harder to define who's "hot," but I'm going to give the honors to J.T. Realmuto. In Tuesday night's loss, Realmuto reached base three times and hit his first home run since April 11. It's proved impossible to have everyone clicking at once in this Phillies lineup, but Realmuto coming along as the summer creeps closer would be huge for this squad.

Look, Bryce Harper's the best Phillies player and he's single handedly responsible for bringing the Phillies out of the mire of their post-Golden Age malaise. He won last year's MVP. I get that. Someone has to get this award though and Harper was a combined 0-for-8 in the two games. Forget Texas and worry about the New Yorkers heading to CBP on Thursday, Bryce. It's all good.

Nick and Jessica Castellanos welcomed their newborn son, Otto, in the world early Wednesday morning. Castellanos, always one to perform well when something of note is happening in the world, responded by going 3-for-4 in Game 2 of the series.

Castellanos had a ground rule double that was initially ruled a home run. It looks like a fan might have interfered with it? Maybe not? Hard to blame the dude in the heat of the moment, but he was smiling and laughing about it afterwards. I would've put my hat over my face and ran to the subway in embarrassment even if I wasn't truly the case of the homer being overturned:

Nick Castellanos had a home run overturned because of fan interference 😩 pic.twitter.com/BtoKX0Kwnx

Looking Ahead: Mets Come to Town 🤢

The Phillies kick off a four-game set with the Mets in the friendly confines of South Philly on Thursday. The Mets are in first place in the National League and, as of this writing, lead Major League Baseball in runs scored. The Phils also lost two out of three to them on the road last weekend, including a game in which they were no-hit. The vibes? They ain't great!