Giroux scores in the Panther's playoff opener, and the Penguins needed 3 overtimes vs. the Rangers near the anniversary of their 5 OT duel with the Flyers 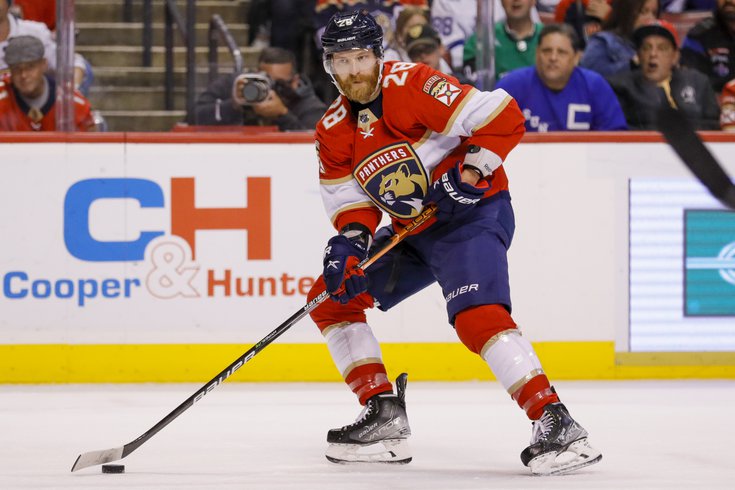 It's inevitable. At some point in the Stanley Cup Playoffs, you're gonna need some coffee.

It happened right away this year.

The Rangers and Penguins needed three overtimes to decide the opening game of their series. The Penguins needed a goalie switch midway through the second OT, New York netminder Igor Shesterkin made 79 saves — the second most in playoff history — and the longest NHL game ever played at Madison Square Garden ended after nearly 106 minutes, when Pittsburgh's Evgeni Malkin tipped in the game-winner.

The marathon Game 1 happened just shy of 22 years to the day — or two days — when Keith Primeau and the Flyers needed five overtime periods to put away the Penguins, 2-1, in Pittsburgh.

May the 4th be with you. Some kind of force was at work for @NHLFlyers and @primes25 twenty two years ago today (and technically tomorrow)! pic.twitter.com/Vqw1RzuI4R

History doesn't repeat itself, but sometimes it sure can rhyme.

Claude Giroux put home a loose puck and FLA Live Arena erupted. The Panthers fell behind 1-0 to the Washington Capitals early in the first period, but Sam Bennett tied the game up before the end of the frame.

Forty-three seconds into the second period, Giroux gave them the lead, scoring his first playoff goal since the Toronto bubble all the way back on September 1, 2020.

It's been a while, and you bet Philly's watching too.

CLAUDE GIROUX’s 1st GOAL OF THE PLAYOFFS GIVES THE PANTHERS THE LEAD pic.twitter.com/QqSKPtac20

The Panthers went on to give up three unanswered goals to the Caps to drop Game 1, 4-2. Game 2 is Thursday night.

“We're still in good spirits," Bennett said postgame. “We still know how good of a team we are. There's no panic in the locker room whatsoever. Everyone's still positive. We'll learn from that game and move on. It's a long series."

Florida has high expectations. After winning the Presidents' Trophy for the league's best regular-season record, the Panthers aren't only gunning for their first playoff series win since 1996, they want their first Stanley Cup.

They went and got the former Flyers captain at the trade deadline to help them do it, and since arriving to Sunrise, he's been on a tear with 23 points through 18 games to close out the regular-season schedule. It continued into Game 1 and will have to as the postseason goes on if Giroux and the Panthers want their best shot at finally hoisting the Cup.

“It's going to be a lot harder in the playoffs," Bennett said. “We learned that tonight."

It's been so long

Have you noticed ESPN's scheduling the past few nights? It's been all hockey. Each and every playoff game thus far nationally broadcasted until late into the night.

We knew this was coming once the ink dried on the NHL's new TV rights deals with ESPN and Turner last spring, but to actually see it onscreen after the "worldwide leader in sports" made little effort to mention hockey in the past 18 years, it's still a bit jarring.

But I've found it comforting too.

The NHL broadcasts aren't what they were when ESPN last aired games back in 2004 — Gary Thorne not coming back is still a huge bummer — and many will tell you, as a whole, that ESPN in its current form is a far cry from the network it used to be.

But look, the last time NHL hockey was on ESPN, the Flyers were making a serious push before it all ended in heartbreak against Tampa Bay in Game 7 of the Eastern Conference Finals. I was 10 years old. I'm 28 now.

Hearing that music again intertwined with graphics of the Stanley Cup, and cutting back to a studio panel with Steve Levy, Mark Messier, and Chris Chelios, it's all been a nice nostalgia hit.

TNT and TBS will start broadcasting playoff games on Thursday, which will be a first, and I'm looking forward to seeing how that goes.

In the meantime, excuse me, I'm gonna go dust off my copy of NHL 2K5.