Dave Dombrowski on Phillies' early hitting woes: 'I think we're better than this'

Speaking to The Athletic, the Phillies president believes the club's hitting struggles will work themselves out 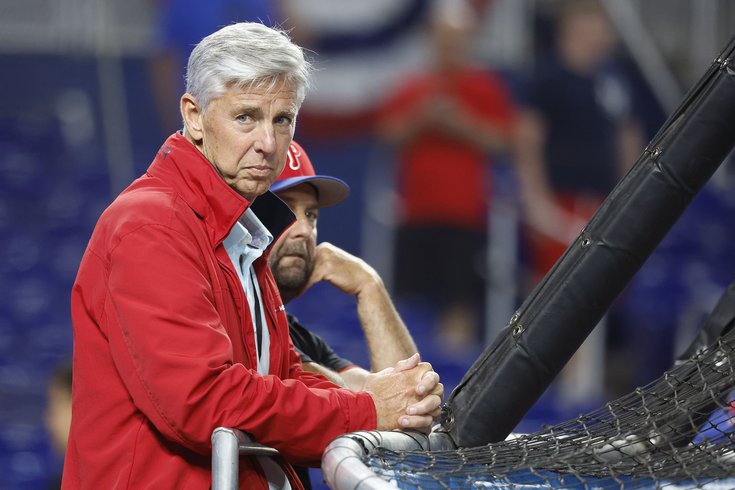 Appearing on the newest episode of The Athletic Baseball Show, the Phillies' team president joined hosts Jayson Stark and former Phillie Doug Glanville to talk about the team, his approach to building a club, the Angel Hernandez fallout, robo umps and Miguel Cabrera, the newest member of the 3,000-hit club who Dombrowski has a long history with.

"We don't want this one to fall apart."

The Phillies beat Colorado in an 8-2 outburst Monday night, but prior to that, they had been held to one or no runs five times and carry an unimpressive 7-10 record that puts them fourth in the NL East.

"I do think from an offensive perspective, I think we're better than this," Dombrowski said on the show.

As a team, the Phillies are batting .252, which is good for sixth in the majors entering Tuesday night. They're also slugging .406, which is good for eighth. Things just haven't fully clicked yet for a lineup that had a ton of buzz around it in the spring.

"We really just haven't produced on a regular basis," Dombrowski said. "Part of it, I'm not sure if they're trying to do too much because of who they are, we've had a hard time driving in runs when we get on base. So really we just need to snap out of this because we're a better hitting club than this, and if not, shame on me for thinking we are. But it's a situation where I think we have too many good hitters."

Dombrowski noted that aside from Kyle Schwarber, who's hitting .177, the lineup's averages 1-6 have been pretty decent, and Alec Bohm (.314) and Johan Camargo (.292) each producing in their at-bats further down has been a boost too.

Stark asked if the long-time executive believes the humidor being used in all 30 ballparks this season might be having an effect on how well the ball carries, which can be an impediment to a team built to hit its way to victory. Dombrowski, however, believes the Phillies' problems right now are more about where they're hitting the ball rather than how hard they're hitting it.

"Our biggest thing, which is surprising if you look, we rank among the highest teams in hard-hit balls," he said. "We're in the top five, we were until [Sunday] night, so we hit the ball hard. The one thing we haven't done very much is find gaps, and I think part of that is the improved defensive shifting that they have going on, even in the outfield.

"But we still hit the ball pretty hard, we just haven't found the gaps."

As of Tuesday, the Phillies have a fifth-best hard-hit percentage with 44.1, according to Baseball Savant, and are within the Top 10 in barrel percentage (8.5%, 8th), expected slugging (.458, 8th), and expected batting average (.272, 3rd). So even though the production isn't there yet, projections do point to things working themselves out.

Schwarber's early struggles aren't unheard of either, as he had a bad start to 2021 as well before going on a 32-home run tear.

You can listen to Dombrowski's full conversation with Stark and Glanville HERE.