5 awards from the Phillies' series loss to the Brewers 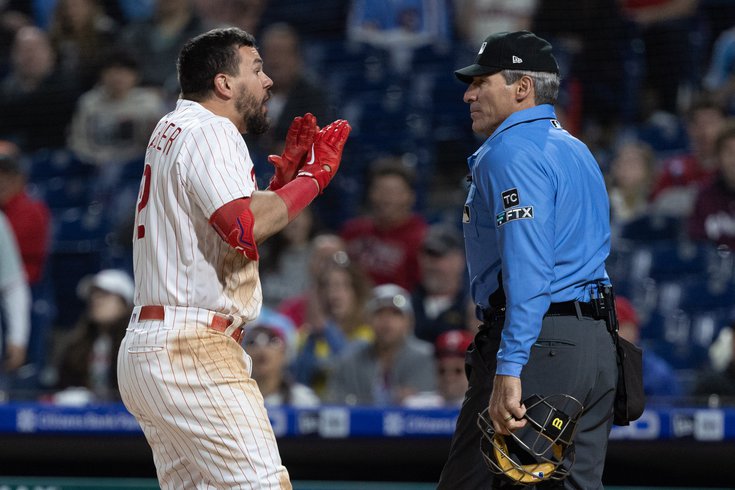 Kyle Schwarber was not happy getting called for strike three looking (on an outside pitch) Sunday.

For the fourth straight series (of five in total), the Phillies mustered a single win and continued to flash their biggest flaws across the board.

The Phils' have been inconsistent in every aspect of the game and have been woefully unable to cash in on key opportunities — particularly against Milwaukee.

Before they move on and try and finish their homestand with some much needed wins, here are a few awards from the series that just wrapped up.

• Five hurlers combined to help the Phillies keep the Brewers at bay in a 4-2 win that saw Alec Bohm continue to contribute with the bat.

• Ace Zack Wheeler got his third straight loss to start the year, permitting four runs in five frames as the Phillies fell 5-3.

• In a controversial setback, the Phillies wasted an Aaron Nola gem and several offensive chances to lose 1-0 in the finale on ESPN Sunday.

In a series that saw the Phillies score just seven times, Segura scored a pair of runs and collected at least one hit in all three games. He's the MVP of the series (which isn't saying much) not simply because he is one of the few offensive bright spots for the club, but because he seems to have helped Joe Girardi solve his leadoff problem. Segura led off all three games against the Brewers and did so in a productive way in each game. Giving the Phillies some lineup stability will help them get into a groove down the line.

For some possible reasons we'll get into in just a minute, Nola tossed a gem in Sunday's 1-0 loss — wringing up nine hitters in seven shutout frames while walking just one and allowing a lone hit. Nola badly needed a game like this to show he could last past the fourth or fifth inning and was able to mow down hitters during his second and third times through the batting order. That is good news for a team desperate for a starting arm with consistency and reliability. If he can do it again in five days, perhaps he'll give the team the confidence it needs in having an ace to rely on.

To say the Phillies' 1-0 loss Sunday was due to one umpire's awfulness might be over-stating it a bit — but in a game decided by one run with diabolically bad home-plate officiating on both sides, one has to think a game called cleaner might have favored the Phillies, who got screwed over more than a few times in key spots. The tale of the tape and some basic analysis agrees:

Umpire Angel Hernandez was the lowest rated umpire on the day, missing 19 calls for a correct percentage of 85.3%.

He rang up 6 batters on pitches that were outside the zone and called a strike to Jean Segura that missed inside by a season high 6.47 inches.#Brewers #Phillies pic.twitter.com/pmmt1ELJJ6

The Phillies are getting their money's worth from newly signed Castellanos so far. The outfielder has started in the field recently in place of Bryce Harper, who has been relegated to DH as he nurses an arm injury. He's played well in the field but even better with a bat in his hand. Against the Brewers he collected a hit in each game and knocked in a pair of runs in the middle of the series. In all, he's hit safely in 13 of the Phillies first 16 games and is proving to be a reliable weapon with slumping players around him left and right.

In the aforementioned 1-0 loss, the Phillies stranded seven runners on base and were 1-for-5 with runners in scoring position. They failed to convert a bases loaded opportunity with one out into any runs in that game, and the other games against the Brewers weren't much better. In their opening win they left some meat on the bone, stranding nine runners and going 4-for-11 in RISP opportunities — though they did enough to win that game. In all, 20 runners reach base and were stuck there in a series that saw Philly score just seven runs.

Very interestingly — despite their shortcomings — they are the second best team in the majors with a .302 batting average with RISP.

Looking ahead: Rockies in town 🏔

The Phillies have a chance for revenge this week against a Colorado club that took two of three games in Denver not long ago. In the four-game set, every starter save for Nola (who went Sunday) will take to the mound. The Rockies are 10-5 to start the year, close to the inverse of Philadelphia's current 6-10 mark.