5 awards from the Phillies' series loss to the Rockies 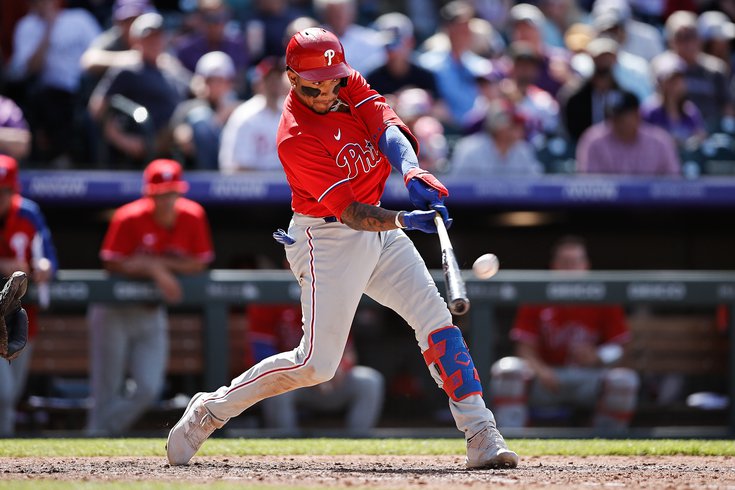 Johan Carmago is proving to be a sleepy great acquisition for the Phillies this past offseason.

Let's start with the good news first: they didn't get swept.

The Phillies (5-8) were able to leave Colorado on a high note after a frustrating pair of losses kicked off a forgettable three-game set. The team has a much-needed day off Thursday before beginning a new homestand this weekend.

Before the Phillies take the field to try and win their first series since the season opener two weeks ago, we have some awards to hand out from the last three games.

• The Phillies were nearly shutout by Chad Kuhl and company, with the only extra base hit coming from Didi Gregorius in the eighth inning of a 4-1 loss.

• A C.J. Cron three-run blast off Jeurys Familia in the seventh inning buried what felt like a potential Phillies' win, 6-5.

• A five-run seventh broke a late tie to lift the Phillies to an eventual 9-6 win.

On a team with so many highly paid sluggers, who would have thought a utility infielder would be making such a big impact — but here we are. After sitting out the series opener, Camargo went 6-for-8, with a four-hit game in Wednesday's big win. In that contest, Camargo's three-run homer made all the difference in the three-run win.

He's also shown versatility, playing all over the infield and playing clean defense, in contrast to defensively challenged infielders like Alec Bohm, who infamously made three errors in a game last week. If Joe Girardi does intend to stick with playing the hot hand, you can bet Camargo will be starting somewhere in the field Friday vs. Milwaukee.

Speaking of Bohm, the infielder has made it nearly impossible for Girardi to leave him out of the starting lineup, as he is raking the ball despite his subpar defense.

In the three-game set, Bohm started all three games and reached base in each, adding a key homer in the win Wednesday as well as a sacrifice fly. He's showing he can do it all offensively, leading the team with a ridiculous .476 batting average in the early going.

The Phillies staff as a whole had an ERA of 5.76 in Colorado — something not particularly unusual in the high altitude. However, it continues a trend. Both the 'pen and starters are unable to keep opposing bats from scoring more runs than the Phillies do — they scored 15 runs in the trio of games, and a 5.76 ERA is not going to cut it.

In all, the Phils are allowing the third most runs in all of baseball, which is an average of 5.15 per game. The 68 runs allowed by the team's hurlers is the fifth highest among all 30 teams. Interestingly, they are around the league average in homers and walks allowed, but their opposition is slugging .412 — the third highest in baseball. The Phillies pitching staff needs to get its act together, even a little bit, to help Philadelphia's high-powered offense stay in games and perhaps stop playing from behind every night.

Gibson continues to be the only reliable starter right now, on a staff that was expected to have a bunch of dependable arms. In his start against the Rockies, he posted another quality start, his and the team's second on the year. He went six strong innings and had the Phillies in position to win the second game of the series before the bullpen blew the game.

The Phillies haven't had many chances for the bullpen to blow a lead this season, so credit to Gibson for doing it old school. On the year, the 34-year-old righty has a 3.37 ERA over 17.2 innings pitched — both tops on the team.

After bursting onto the scene with a pair of key hits in his MLB debut — and a pair of hits a few days later against the Mets — Stott is the definition of ice cold. He has not reached base since April 13, an 0-for-16 stretch that included a five strikeout game in a loss to Miami.

Stott has, as a result, surrendered playing time to Bohm and Camargo who have taken advantage of their opportunities, as we documented just above. Stott will surely have more chances in the bigs before the Phillies consider relegating him to the minors, but if he continues to squander them, his time in the majors could be numbered.

Looking ahead: Brewers in town 🍺

The Phillies return home for seven games starting with Milwaukee (8-5) Friday night. In that tilt, Ranger Suarez will get his third start of the year opposite Freddy Peralta. After that, a 4:05 pm first pitch will match Zack Wheeler with Adrian Houser, and a nationally-televised finale on ESPN will see Aaron Nola pitch against Eric Lauer.

The team's schedule is going to be tough for a few weeks, with the Rockies on the slate again next, followed by seven of nine games against the Mets and a pair of games against the Rangers. Hopefully the Phillies can stop the bleeding and creep back toward the .500 mark before they face some easier opposition.