5 awards from the Phillies' series loss to the Marlins 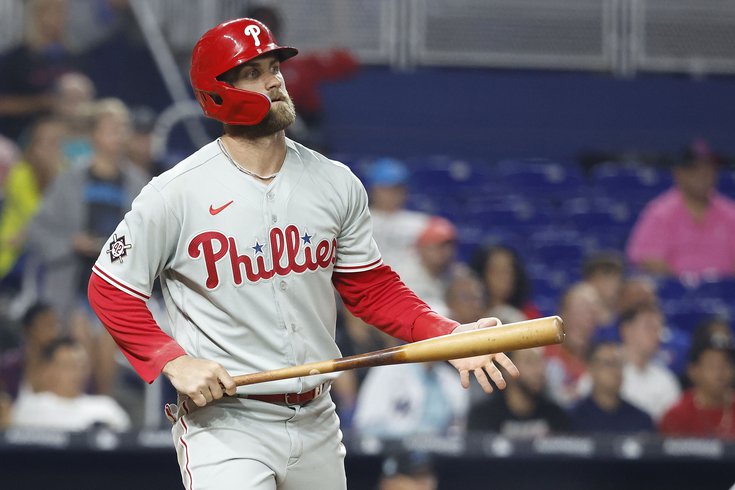 Bryce Harper and the Phillies did not enjoy their visit to South Beach this week.

It would be hard to find many people who hate going to Miami as much as the Philadelphia Phillies.

In fact, whether the Miami Marlins are playing the Phillies at home or away, the result seems to be the same. Since the start of the 2019 season, the Phillies are 22-30 against the Marlins, and 173-170 against the rest of the league. Miami has gone 155-228 over the last three seasons. Arguably, some better performances against the otherwise lowly Marlins could have meant an earlier end to Philadelphia's historic postseason draught.

Three of those losses came this past weekend, with the Phillies (4-6) continuing to show they have unreliable pitching and inconsistent bats. Here's a look at our five awards for a series the Phillies will surely be hoping to have a short memory of...

• The Phillies nearly overcame a three-run deficit early but fell 4-3 to open the Marlins season in Miami.

• In Game 2, the Phils were walloped 7-1 with the lone run coming on a Nick Castellanos solo shot late to avoid a shutout.

• An elusive bright spot came in the third game of the series, with the Phillies exploding for 10 runs on 11 hits, including a six-run second frame in a 10-3 win.

• In the finale, Philadelphia faltered in a laugher, relenting 11 runs after a lackluster Zack Wheeler start in an 11-3 setback.

Suarez showed his ugly first start was just an anomaly, giving the Phillies five solid innings of two-run baseball in his second start, helping the Phillies bullpen to rest a bit and earning the lone win of the series.

The Phillies need some kind of losing streak stopper in the rotation, and it appears at least early this season that Aaron Nola and Zack Wheeler are not currently able to pitch to that standard. Hopefully Suarez will keep the momentum going to his next start against the Brewers.

In the series opener back on Thursday, Realmuto came to the plate five times and had four base hits and a walk. Manager Joe Girardi decided to give him the day off in Game 2 and the Phillies mustered just one run in their second loss of the series. Many expected Girardi's approach to this season to be to ride the hot hand but he decided not to and it may have impacted the outcome of the series.

In the series finale, Realmuto was once again a key cog in the offense, scoring a run on a Harper hit and adding a base knock of his own. With no insult intended to backup catcher Garret Stubbs, the Phillies have a lot of depth all across the lineup, but the drop off from their starting catcher to their understudy is a relatively steep one. The more Realmuto the better.

Something is wrong with Cy Young runner up Zack Wheeler and it might be time to be worried. After starting the preseason late due to some illness issues, his debut against the Mets last week wasn't all that awful, as he lasted 4.2 innings and allowed just one solo homer. However his velocity was down, and his endurance clearly was not where it was last year when he led the league in innings pitched.

Against Miami in Sunday's finale, Wheeler had the second to worst outing he's ever had as a pro, allowing seven runs on eight hits and exiting without retiring a better in the fourth inning. Perhaps it's just a blip, but there were no blips this bad previously in his thus far stellar Phillies career. It would be hard to see a Philly postseason run without an ace pitcher atop their rotation.

Each of these everyday players collected a hit in every game this series, helping to confirm the theory that with this many talented bats in the lineup, it would be hard for them all to slump at once. Gregorius had six hits in the series with Castellanos netting five, one of them a homer. Unfortunately, the Phillies pitching staff seems fairly capable of slumping in unison.

We wrote last week about how Corey Knebel, Jeurys Familia, Brad Hand and Seranthony Dominguez have been pitching well, with the rest of the staff bringing god awful stuff to the mound in their appearances so far. Against the Marlins, the Phils were out-scored 25-to-17, and 25 runs over the course of four games is good for a 6.82 ERA. Even the Phillies offense, which has the potential to be one of baseball's best, is not going to be able to score seven runs a game this season. The pitching must be better.

The Phillies continue their road trip in Denver where they'll face the Rockies for a set of three games. Aaron Nola, Kyle Gibson and Zach Eflin are in line to start against a Colorado team that won six of its first eight games.

Philly will be rewarded with its first off day Thursday before another homestand begins next weekend.