5 awards from the Phillies' series win against the Mariners 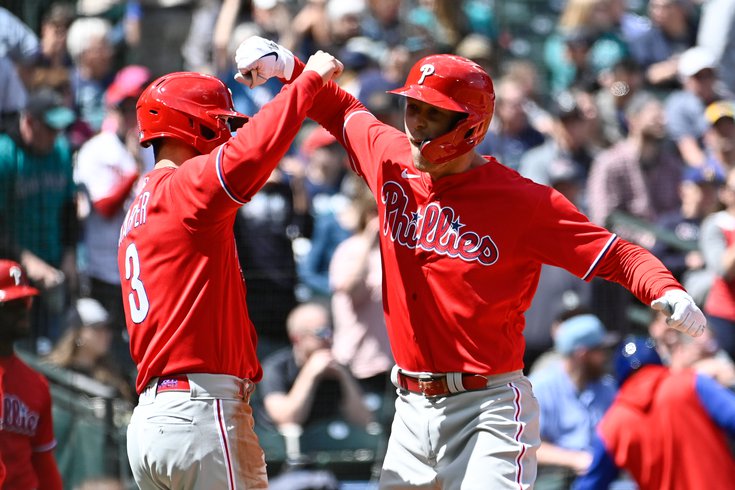 In my short time writing these Phillies series recaps, this is the first one that's for a series win! The Phils ventured to the Pacific Northwest and took two out of three games from the Mariners this week. The club still sits a disappointing three games under .500 at 14-17 while tied for third in the National League East, but, hey, small steps here.

I'll give you the quick details on the three-game set with the Mariners and then hand out five awards:

• The Phils crushed the Mariners Monday night 9-0, as the team hit 6-for-11 with runners in scoring position.

• Aaron Nola surrendered four runs in fewer than six innings in a 5-4 loss on Tuesday.

• Finishing the series up Wednesday afternoon, the Phillies knocked off Seattle 4-2 behind a grand slam from Rhys Hoskins.

Hoskins homered in every game this series, going 6-for-13 at the plate overall. His grand salami on Wednesday proved to be the deciding factor that gave the Phils the series win. Hoskins' batting average, on-base percentage and slugging percentage all sit at career lows at the moment, but perhaps this is the performance he needed to turn things around.

Stop me if you've heard that one before: A quick hot streak could change the course of Hoskins' season and even career!

Since finishing in the top three for National League Cy Young voting in 2018, Aaron Nola has an ERA of 4.06 in 85 starts. That's who he is. He's not 'The Guy.' He's not a No. 2 in a rotation and certainly not the No. 1 pitcher Phillies fans envisioned he'd be for years to come. That's the Phils for ya: they finally develop a great homegrown pitcher and things go south about as quickly as they were going well.

Nola allowed nine hits in just 5.1 innings on Tuesday and was given a loss for the effort. If the Phillies improbably made a run towards the Wild Card, I don't know what the team would need to prioritize more at the deadline: centerfield, the bullpen or a starter. Well, I guess if they need all of that they probably won't be in the race. Whatever.

Phillies relievers pitched 9.2 innings across these three games and gave up just a single run. I'm in disbelief. Props where props are deserved!

Jean Segura can't stop winning this award! In Seattle, Segura went 4-for-9 at the plate with two homers, five runs scored and three walks against his old squad. Segura's rate stats continue to rise. His on-base percentage of .364 and slugging percentage of .474 are his highest since his 2016 campaign with the Diamondbacks, a year in which he led the National League in hits. Segura is now riding a nine-game hit streak. Dare I say... he might start deserving All-Star consideration?

I had to go with three freezing emojis the same way I gassed up Segura. It's warranted.

Kyle Schwarber's had a Jekyll and Hyde 2022 season. He has seven homers in 29 games, but other than that, he looks borderline blind at the plate. Is this because I bought his shirsey on Opening Day? Very likely! Schwarbs went 0-13 against the Mariners with seven strikeouts. He's now hitting .185 in 2022. That's simply not good enough.

The Phillies open a four-game series against the Dodgers on Thursday night at 10:10 p.m. Philly time. Los Angeles has the best record in the National League at at 20-9. They'll face star pitchers Clayton Kershaw and Walker Buehler on Friday and Saturday, respectively. It's a brutal stretch for the Phils, who will have series with the Mets, Giants, Angels and Brewers following this stint in L.A. Not great!