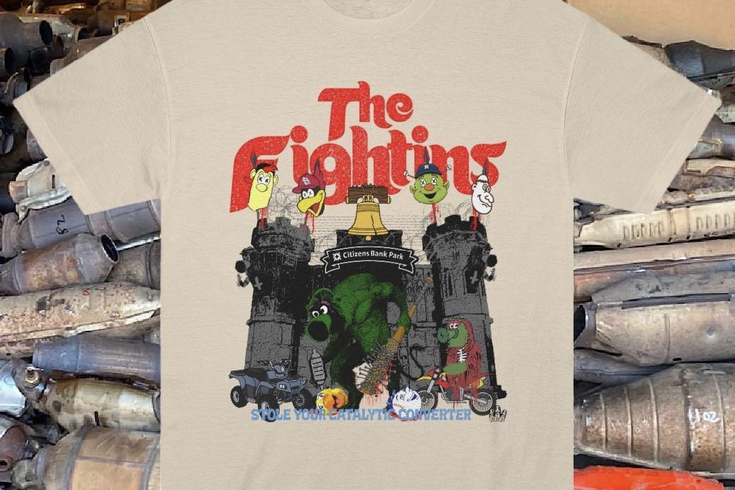 Even hardcore Phillies fans may have been iffy wondering if this team could make a legitimate playoff run just four weeks ago. Fast forward to early November and now the Phils are fighting for their lives, with a do-or-die World Series Game 6 taking place Saturday night.

It's been an unexpected thrill, as the city falls in love with baseball once again and Philadelphians eat it up. That extends to them getting decked out in their Phillies gear, whether they're rushing to the New Era store down at Citizens Bank Park or waiting approximately six weeks to get a t-shirt from Fanatics.

Philly is a hotbed for creativity and zaniness that reflects the residents just as much as it does these slugging dancing weirdos on the Phillies team. There may be no city more fit to have a thriving, independent art scene that can make craft apparel that sums up its heart and flair.

I'm someone who loves supporting these DIY artists and t-shirt makers. I don't need a generic World Series shirt with the MLB logo on it. Give me something real.

Take Jim Anderson, who runs the @grimgrimgrim666 Instagram page where he sells wild Philly sports merch. "Over the top" would be an understatement for his t-shirts: 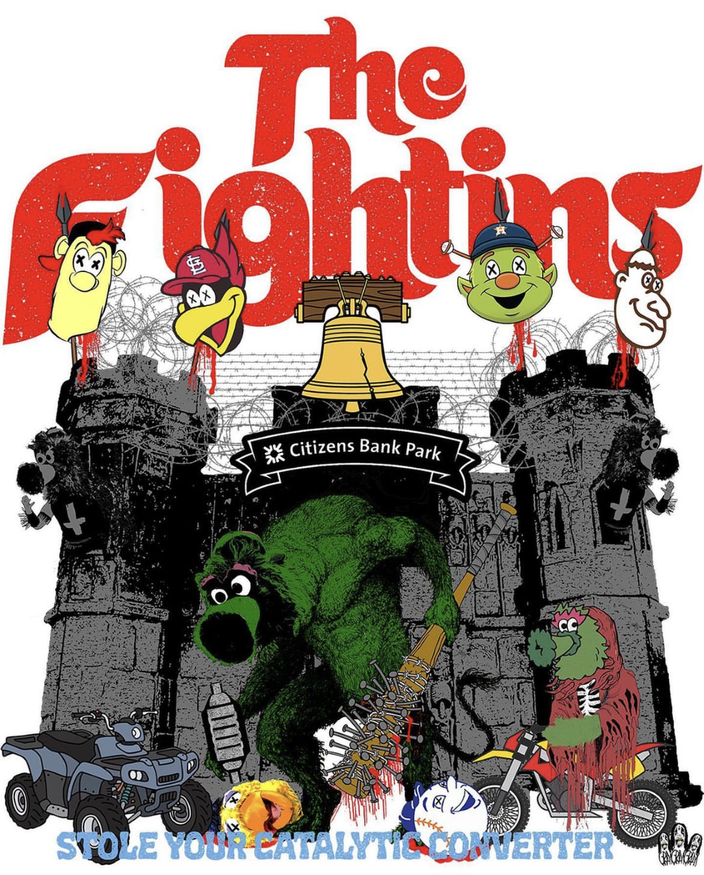 Anderson describes his style as "turning mascots into monsters," having a healthy amount of success making Gritty t-shirts and jerseys over the years. "I use a lot of Satanic imagery because I think it's hilarious," Anderson says. "It's funny to me to see people wearing Gritty shirts with guillotines on them."

He knows his target demographic.

"Philly is crazy, the craziest place maybe ever." - Jim Anderson

Like the rest of Delaware Valley, this Phillies run took Anderson by surprise.

"The first Phillies shirt I put out said, 'Death Awaits,' and I made that probably a year ago. I was trying to do one design for the whole year not thinking the team was going to start winning. Even with the Phillie Phanatic, I had no clue they'd be going into the playoffs at all. No one did.

"When I found out they were winning and realizing they were going to make the playoffs, I knew I had to make a shirt. Selling stuff on Instagram is hard. You have to be right on top of it."

I must say, I've been a customer. Where else in the world could you get a t-shirt of the Phanatic turning the San Diego Chicken into a chicken cheesesteak?

With Anderson's designs, the Phanatic is also cooking up some Texas BBQ.

"I was enjoying the playoffs. When Bryce Harper hit that last home run [in Game 5 of the NLCS to win the pennant]. I was like, 'Oh, they're actually going to go to the World Series,'" Kenney said. "I sort of had an idea in the back of my head for a shirt that would be cool, so, when they clinched it, it was one of the quickest drawings I've done. I was just hype to have a chance to do it."

He put together this bad boy to sell on shirts at recent pop-up events: 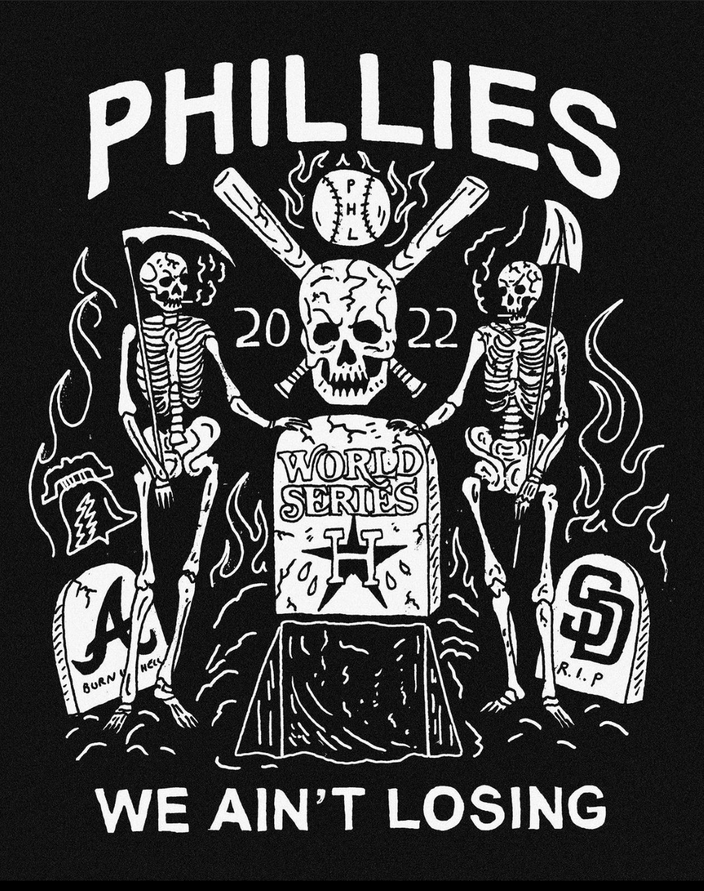 Kenney simply sums up his style as "a lot of skulls," going for a minimalist approach.

Kenney, channeling those DIY vibes, wishes professional teams and leagues understood why things like this resonate with fans, saying, "I feel like it's such a wasted opportunity in sports to not hire artists to make their shirts instead of using their same old logo."

Courtney Paczewski and her sister Katelyn Palan have gone full DIY with their sportswear creations on the @deus.sis Instagram page.

"Me and my sister started bleaching things right before COVID," Paczewski says about how plenty of downtime led to her branching out to the apparel world. "My husband got COVID. We were bored in the house and that's when I bought that Cricket machine that cuts the vinyl."

Paczewski, like everyone else, was shocked by the Phillies' Red October and was in a rush to start making designs and putting out product.

"We weren't prepared for Phillies, so we have tons of Eagles stuff," Paczewski said. "That's usually what's selling, so we're kind of scrambling. I picked up as many crewnecks as I could. It's crazy.

"People are so excited about it!"

"Dancing On My Own," the Robyn hit turned EDM cover remix that's become the theme song for this Phillies' postseason, is making its way on their merch with this design: 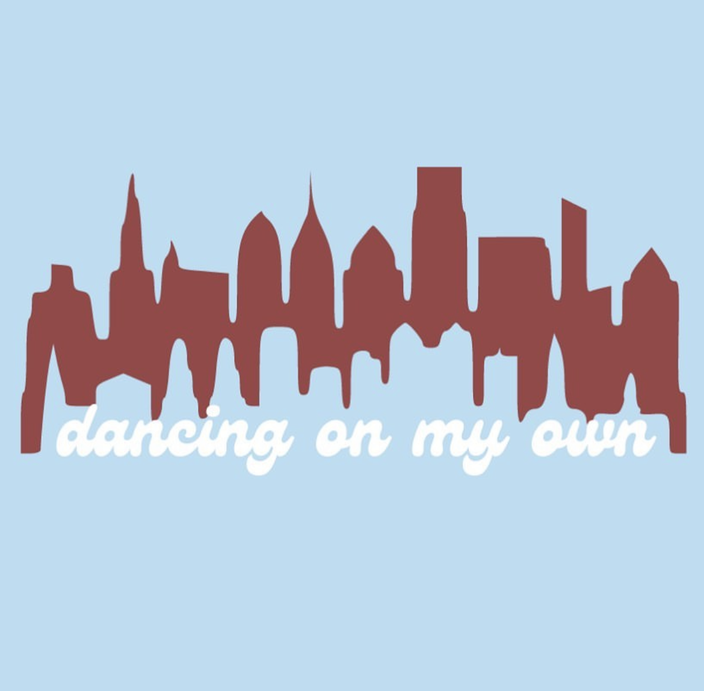 They're living it up during these playoffs like the fan base is.

"We're just two sisters working out of my attic trying to create these things for people to wear to games."

Taking a slightly different approach, Philly artist Paul Carpenter is putting an emphasis on intricate detail in his drawings and designs.

Carpenter, who has his own website and runs the @paulcarpenterart Instagram account is putting the emphasis on his art in contrast to what you might see Phillies players wearing in celebration after a playoff round win.

"It's all about the art," Carpenter says. "It's a celebration of the depth and character and the diversity of Philadelphia. You can see it neighborhood to neighborhood, all of the culture the city breathes."

Carpenter, who takes influence from skateboarding and underground hip-hop, is looking for "lasting value" when it comes to the art he puts on prints and shirts.

You could spend a whole lot of time checking out the intricacies of his Bryce Harper t-shirt: 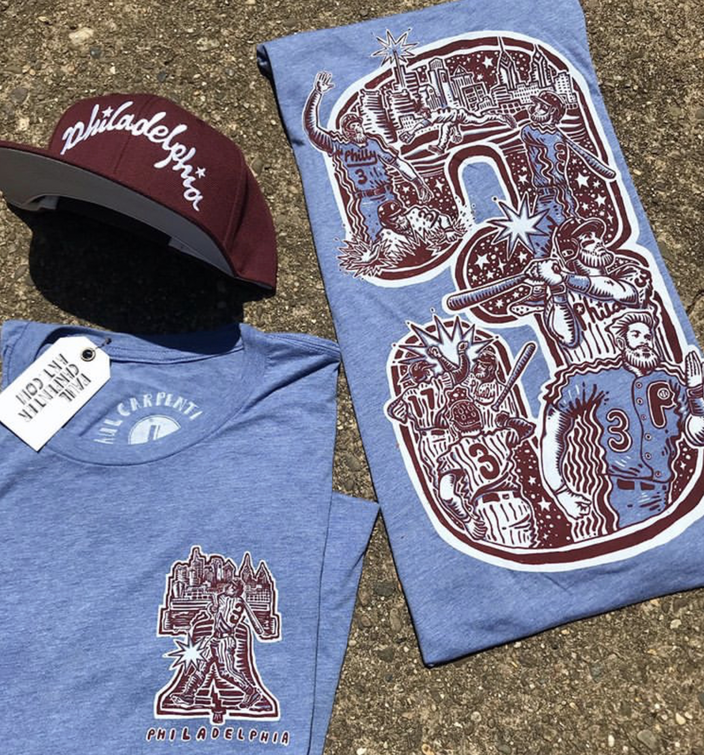 Carpenter said that he had an "onslaught" of purchases in the aftermath of the Phillies winning the pennant. He adds the perfect local touch to his orders with faux cheesesteak and hoagie wrappers used to package and ship his work. Yet again, only Philly.

Perhaps this miraculous Phillies World Series appearance ends in a loss on Saturday or Sunday night. Even if so, the magic of this postseason will live on in Philadelphians' memory with plenty of art and shirts out there to showcase what a special time it was for this city.