Plus, a look at Northeast preparing to face powerhouse St. Joe's and all the latest PIAA playoff info 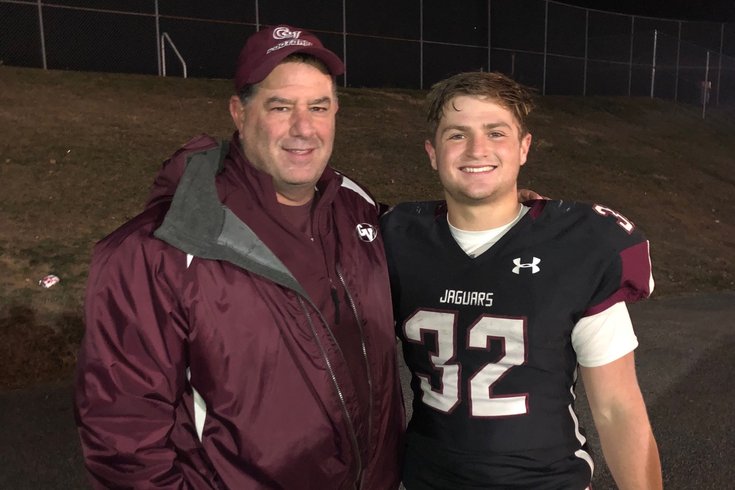 There was a time, a few decades back, when Garnet Valley High School had about 25 players on its sideline playing on the fringes of Delaware County. Yet, each year, coach Mike Ricci put out a respectable, competitive team.

Through time, Ricci has built a powerhouse. The Jaguars have traditionally become one of the teams to watch in PIAA District 1 6A. Since the move to 6A, Garnett Valley has reached the district semifinals all four years.

Over the last decade, Ricci has played a one-platoon system. This year, there is an exception—senior Jake Morin, who plays running back, outside linebacker, long snaps and is on the Jags’ punt return. He's also a lacrosse commit at Penn State, one of the top three lacrosse teams in the nation. The 5-foot-8, 195-pound senior is a two-year starter who almost literally never comes off the field.

It’s been a long, long time since Ricci has had a player that versatile.

“We’re so fortunate at Garnet Valley to have kids who have bought into the culture about selflessness and oneness,” Ricci said. “We have blue-collar, gritty kids. I’m so proud of our kids, because this senior class and this team has grown and grown.

“Jake and the 34 seniors are at the hub of that success. They’re great leaders who make it work.”

This season is it—no more organized football for Morin, who shares the backfield with senior Greg Reynolds, who ran for five touchdowns in Garnet Valley’s 56-21 over Plymouth-Whitemarsh last week in the quarterfinals of the PIAA District 1 Class 6A tournament.

“I love playing football,” said Morin, who played only linebacker last year. “Coach Ricci asked me to play running back, and everything and everyone with this program prepared me for that.

“We know how good Coatesville is, and we know how well-coached they are. But we’re a good football team, too. Our coaches always tell us that when we all do our jobs, we can beat anybody. We’re the only ones who can beat us, when we make mistakes.

“It is on my mind, that this could be my last game, my last practice, my last film session, but I want to keep playing and be with my teammates for as long as I can. That’s the biggest thing for me.”

Win or lose tonight, no one can say Morin was robbed of a second in his last year of playing organized football.

Northeast is ready to face the monster, St. Joe’s Prep

Northeast coach Phil Gormley is a legend, and has seen some great teams through the decades in the Philadelphia area. So, he knows what he and his Vikings will be up against in the PIAA District 12 6A championship (the city championship) this Saturday night at 6 p.m. at Northeast, when the Vikings play the area’s No. 1-ranked team, St. Joe’s Prep.

“Year in and year out, Prep is one of the top teams in the country, who have great coaching, have great players and put a ton of money into their team,” Gormley said. “Listen, they’re as good a high school team that you’ll find. Prep is obviously on a totally different level. We’ve tried to put more difficult teams on our schedule to get ready for teams like Prep.

“The only way to get better is to play better competition. At this point, my kids aren’t afraid anymore. We’ve played St. Joe’s Prep four years in a row. When you watch them play, the game is over before it starts. I was at the La Salle game (last week, a 52-7 Prep victory, which the Hawk were up 45-0 at halftime). La Salle—not being disrespectful, it’s a great program with great coaches—should have just got back on the bus.

“That’s just the reality of it. Prep is like the old Frankford teams, where the band would be playing before the game and they should have stopped the game right there, because it was over.”

“The kids are excited about this, because you’re playing the best,” Gormley said. “My kids believe that they have an opportunity to win. Hey, a few years ago, they were excited to tackle (Prep’s) D’Andre Swift, because he’s going to be in the NFL one day. My skill kids are pretty good. If they make a mistake, we can make them pay for it.

“If your kids can’t embrace, for all intents and purposes, playing for a Pennsylvania state championship, then you’re doing something wrong. My kids love the opportunity to play against the Prep. We have a tremendous amount of respect for their coaching staff and players, but we don’t have anything to lose.

“You won’t find a single person outside of our locker room who thinks we have a chance. But none of them will be wearing a helmet. If we don’t make mistakes, if we don’t turn the ball over, and the kids rely on their coaching, I think it’s going to be a better game than people think.”