Infrequently Asked Questions: How many bees live in Philadelphia? 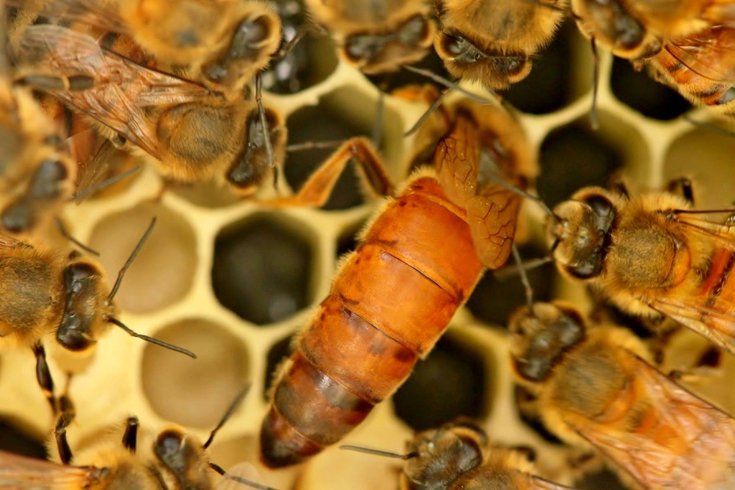 An up-close shot of a queen bee, captured at the 2014 Philadelphia Honey Festival.

Though we often envision bees populating flower fields or garnishing a forest tree, the truth is that, in a city populated by 1.5 million people, there are more than a few beekeepers making the most of the urban space they're working with.

Curious to know how active the scene is in Philly (and just how many bees there are), we reached out to Suzanne Matlock, former president of the Philadelphia Beekeepers Guild and organizer of the annual Philadelphia Honey Festival, to talk bee population, what it feels like to handle them and Philly's history as the "cradle" of beekeeping.

What is the bee population in Philly? Is there a tally?

There are a couple groups that keep tallies of various things: bees and beekeepers. The first thing is that the beekeepers in the Commonwealth of Pennsylvania are supposed to register with the Department of Agriculture. They have that list of beekeepers who follow that rule to register. There are people who don’t follow because they don’t know there is a rule or don’t get around to it or whatever. But that's a good estimate of the number of beekeepers in Pennsylvania – and they’re able to break it down by county. We haven’t asked recently, but the last time we asked, we found there were 200 registered beekeepers in Philadelphia County.

Is that a high number?

I think that’s a lot of people in a fairly small space if you consider we don’t have huge, vast fields of agricultural area. We have a lot of tiny little fields of agricultural area. And, of course, Fairmount Park is a pretty big source of food for bees, the bee population. Then once you get a sense of the number of beekeepers there are, then you can ask how many hives each one has, which the department also keeps track of. In our city, most people are hobbyists, not professional beekeepers making a lot of honey. It’s safe to say the average of those 200 beekeepers is around four. Some people have 20 because they’re able to put them on a roof or in a park or somewhere -- some have two on their front lawn or back lawn. But all in all, I’d say an average of four, so when you think of 200 times four, you’re up to 800 beehives. What I’m talking about are managed honeybees. There are tons and tons of bees, including wild honeybees, and I’d say around 300 other bee species are here that are native …

Now, in each of those hives, now that we’ve multiplied it out, to 800 hives or so, in the springtime, the bee population is going to increase rapidly because a queen begins laying eggs beginning as the days grow longer. In the next week or two, the queens start laying more and more and more because the days are getting longer and the colony has intuition that the warm weather is coming. At the height of the population in each of those hives are about 60,000 bees -- in each of those 800 hives. Now, you can multiply that -- 60,000 times 800 -- and come up with approximately how many managed honeybees are in Philly (48,000,000, or 48 million). Each individual bee doesn’t last long, but it’s quickly replaced by another one. If you multiply that out, you’d then know how many bees are managed, right at about the middle of the summer -- June or July -- and that’s about the time of year people take the honey out of the hive.

Are most people doing it for honey or as a preservation effort?

I find it’s about 50-50. There are a lot of people doing it just because they want more bees around. They don’t necessarily care about the honey. They’re trying to be part of a solution for the vanishing bee problem. And then the other 50 are really excited to just get some honey, share with their friends, and that's what drives them -- the sweet reward of honey.

Is it hard to recruit young people to do this?

We’re actually seeing a lot more young people doing it than any other county, possibly with the exception of Pittsburgh. It seems the urbanites are doing it more as hobbyists. They’re finding it to be a really great family hobby. They’re getting kids involved at a young age, getting schools involved by maybe bringing an observation hive into schools and talking about bees. A fair number of schools have hives of their own. And we see a growing interest from young people in that perspective, and especially like Boys Latin has a huge apiary, what we call a bee yard, and St. James School has a few hives. Project Learn has an observation hive that’s in the classroom all the time ...

We also see a lot of Temple students fairly interested.

Why is Philly sometimes called the cradle of beekeeping?

We should be proud of this history. A person by the name of Lorenzo L. Langstroth invented the hive design the vast majority of the world now uses for beekeeping. There was this idea, which was a series of modular boxes – you may have seen this, it looks like a filing cabinet in a way – and when you open it, there are hanging folders in there, but in each of these folders is a sheet of wax, and you can pull each one out individually. Before he came up with this design, people would keep hives with the frames that weren’t removable -- they might have been movable, or able to leave the book, but not removable, or they were really stationary and you had to destroy the bees to get out the honey.

Langstroth was a minister; so, he was very pleased that in his patent you could work on your bees without harming a single one. That was pretty important to him and important very much today so that we don’t destroy bees to get honey. That’s why we call it the cradle of modern beekeeping: He was the inventor, and he was born on Front Street. And our club erected a marker to his memory on his 200th birthday. So that’s why we call it that.

Why is beekeeping important?

[It's important] if you like to eat, which most of us do, or eat a varied diet, which most of us do -- one that’s not all brown and yellow and gray, or grains, that is to say. We need pollinators. Of all sorts. But the honeybee is one of the more efficient ones. For many crops, it’s the most efficient pollinator that makes our plate colorful. Berries, strawberries, blueberries, raspberries, apples, kiwi fruits, avocados, pumpkins and all squashes and cucumbers and watermelons in that whole big squash family -- all those need honeybees to pollinate them. And if you want to go one degree of separation, even a really great steak needs a cattle that ate delicious alfalfa, pollinated by honeybees. Even a really good steak depends on [having] honeybees around.