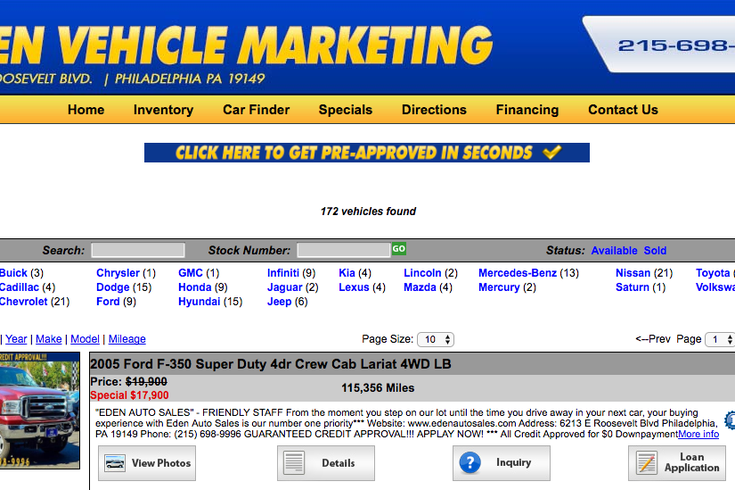 A screenshot of the website for Eden Auto Dealer in Philadelphia.

Prosecutors said that as part of a settlement reached with Haim Shmilovitch and his business, Eden Vehicle Marketing, Inc., eligible customers will be able to receive $1,000 in restitution.

Ads for Shmilovitch's dealership, known as Eden Auto Sales, offered coupons for $1,000 to use on a purchase, authorities said.

Yet in the fine print of the coupons, the phrase "up to" was included to specify how much the coupon was worth, and it was stated that the coupon must be presented before negotiations, the Attorney General's Office said.

• Advertising "Rates as Low as 1.9%" without saying the rate was an annual percentage rate

• Advertising cars for sale with the statement “$0 DOWN," but not including the terms of repayment and the annual percentage rate

• Using the advertisement “Dr. Credit has the prescription. Fix Your Credit Here!” without saying how that would be accomplished

In addition to restitution to customers, Shmilovitch was ordered to pay Pennsylvania $2,000 in civil penalties and $2,000 in investigation costs.

Customers who believe they are eligible for restitution need to provide documentation that shows they bought a car from Eden Auto Sales with one of the allegedly phony coupons that wasn't applied to the sale of the car.

Complaints must be filed by Dec. 16 and can be filed online at www.attorneygeneral.gov or by calling the Bureau of Consumer Protection at 800-441-2555.