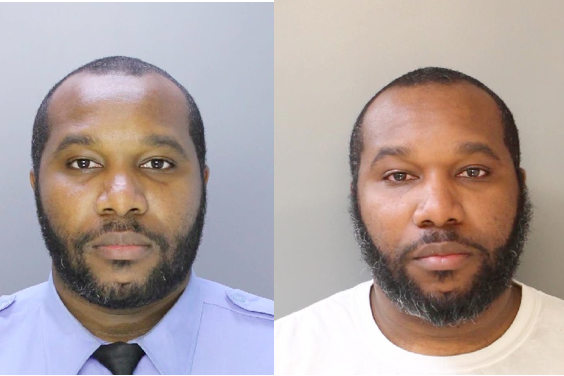 Philadelphia police officer Antonio Mayhew. Mathew, a 10-year veteran of the force, is accused of hitting his wife and chasing her with his police vehicle.

A Philadelphia cop has been booked for allegedly striking his wife and then chasing her down with his police vehicle.

The Philadelphia Police Department announced the arrest of officer Antonio Mayhew on Thursday after an investigation into the incident, which authorities said happened on the 5200 block of Market Street around 2 a.m. Tuesday.

Mayhew allegedly punched his wife in the head while she was in the passenger seat of his cruiser, police said.

The woman then left in her own car, but Mayhew allegedly chased her down in his cop car with its police sirens and lights activated, authorities said.

She ended up getting into an accident at 61st and Walnut streets with another vehicle. Police said the driver of that car was hospitalized with critical injuries.

Mayhew, a 10-year veteran with the 1st Police District, has been suspended for 30 days with intent to dismiss.